A Biden win is great, but some women are even prouder to see Kamala Harris make history

Linda Parrick, sleep-deprived since election day, got up early. Meditated. Checked the news. (No news.) And had just sat down in her Long Beach home to watch the University of Michigan Wolverines take on the Indiana University Hoosiers.

Shauna Davis was surrounded by hundreds who had gathered Saturday morning in downtown Los Angeles to demand the election process be protected from partisan interference.

And Anita Ross was curled up in bed in Sacramento when her daughter Kameela raced in. The 10-year-old had spent the week obsessively watching the electoral vote count’s glacial progress. On Saturday morning, she had news.

The wait was over. Sen. Kamala Harris had been elected vice president, the first woman to reach that near pinnacle of U.S. politics. Oh, yeah — and Joe Biden had prevailed over President Trump in the race for the Oval Office.

Soon, mother and daughter were “hollering and screaming,” said Ross, who is Black and Latina. For her daughters, Kameela and 12-year-old Angelina, “there is a sense of relief that they now have a model for what is possible for them. And so it is very, very, very inspiring.”

And “emotional,” she said, before pausing and choking up. “Just to be able to see a Black woman, an Indian American, a woman, hold the VP position — it’s been a long time coming.”

A century, if your starting date is when the 19th amendment was ratified, giving women the right to vote in the United States. Women have been on major-party tickets on occasion over the past 36 years: Hillary Clinton, who lost to Trump in 2016; Sarah Palin, John McCain’s running mate in 2008; Geraldine Ferraro, Walter Mondale’s VP pick in 1984.

But never on a winning ticket. Until now.

Democrats — and some Republicans and independents — celebrated Saturday that the counting was over, that civility was soon to return to public discourse. That victory resonated even more for many women and their daughters and mothers and sisters — especially for those who are Black or Asian or Latina or of mixed race.

When they look at Harris, they see the laughing, dancing, Chuck Taylor-wearing stepmom. They see the former prosecutor and senator from California who grilled then-Supreme Court nominee Brett M. Kavanaugh about whether he knew “of any laws that give government the power to make decisions about the male body.”

They see the ebullient political warrior who took the stage Saturday night as vice president-elect, resplendent in suffragist white, and declared: “While I may be the first woman in this office, I will not be the last. Because every little girl watching tonight sees that this is a country of possibilities.”

They see power and poise. They see themselves.

Davis, who lives in Echo Park, danced and hopped along Hill Street in downtown Los Angeles, holding a “Trump Pence out now” sign. The demonstration to protect the vote had morphed into a celebration. “I’m feeling very excited,” the 27-year-old said.

She was elated that her grandparents in Florida, who are in their 90s, were able to see the elections of the first Black president and, now, the first Black vice president. She was single-minded in her revelry.

“It was completely about Kamala Harris for me,” she said. “I feel supreme joy and excitement.”

Melina Abdullah, co-founder of Black Lives Matter-Los Angeles, was on a family Zoom call Saturday morning when the news arrived. Immediately, she and all her relatives started typing in the chat, saying “Hallelujah.” Abdullah felt overwhelming relief.

“We weren’t even realizing the level of daily trauma we were experiencing at the hands of Donald Trump,” said Abdullah, who is Black. At a rally in Pershing Square, she told people that they had voted out the most oppressive and violent president this country has experienced. And she told them they should demand something in return.

Abdullah, like Harris, attended Howard University and was a member of the Black sorority Alpha Kappa Alpha. Abdullah was inspired by Maxine Waters as a freshman in college but had few other Black women politicians to look up to.

She said her two daughters don’t have the same experience. Her eldest, Thandiwe, asked Harris how she planned to hold law enforcement accountable at a town hall during the presidential primary.

“On an emotional and symbolic level, it’s difficult to not celebrate Kamala Harris,” Abdullah said. “When I was their age, I never would have seen anything like that.”

Katie Kalvoda, a Vietnamese American from Laguna Hills, booked a hotel room in Washington, D.C., for her family after learning of Biden’s and Harris’ victory. She had promised her daughters a trip to the White House if their candidates prevailed.

Kalvoda was proud to have backed Biden, but she was prouder to see Harris make history.

“She broke the ultimate glass and bamboo ceiling,” Kalvoda said. “I have no words for what this means for my daughters, who get to grow up with Harris as a role model.”

Ange-Marie Hancock Alfaro heard the news about the Democrats’ victory while she was working in her Los Angeles office on a book about the history of African American political thought. She had just taken a break when her sister and mother sent a joint text.

Hancock Alfaro is chairwoman of the department of political science and international relations at USC. She is also in “a family of all women.”

“We take this very, very seriously, and we’re very excited about Kamala Harris being the vice president-elect,” she said.

Hancock Alfaro, who is Black, said her youngest sister and mother “were very concerned that America, other voters in other states, would still not be progressive enough” to vote for Harris, a woman of color. “I think she had quite the opposite impact,” Hancock Alfaro added. 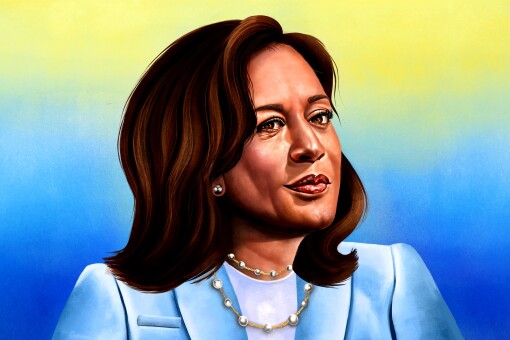 Although the jubilation was probably loudest in California, Harris’ home state, women across the country, from blue states and red, celebrated the historic announcement Saturday.

In Houston, Margie Beegle, 79, was sitting down Saturday morning to play duplicate bridge online when her partner in the game bailed. The vote count was getting too close, and her bridge partner just didn’t want to play. Then the news came.

“Kamala was my pick for president,” said Beegle, who is white. “When I heard her interview Kavanaugh — she’s smart, and she’s tough.”

Two of Beegle’s three daughters are avid supporters of Biden and Harris; the other voted for Trump. Beegle is delighted about Harris’ ascent, and she knows her mother would have felt the same way.

“I really think my mother should not have gotten married and had children. She was not happy as a housewife,” Beegle said. But on this day, “she would have been pleased.”

For Meghna Mahadevan, the Democrats’ win felt especially personal. Her family is from the Indian state of Tamil Nadu, as is Harris’. And like Harris, Mahadevan has deep roots in Oakland.

Everyone in Mahadevan’s WhatsApp group chats has been sharing news about ceremonies taking place in Indian temples. Families are sending photos of Tamil billboards that went up before the election in Harris’ ancestral hometown of Thulasendrapuram. One spoke of the pride Indians have that Harris, “a daughter of the land,” was poised to become the U.S. vice president.

“It’s a really big moment,” said Mahadevan, 27, in a telephone interview from Atlanta, her voice drowned out by cheers from the celebration at Freedom Park.

“So many of us within our Tamil community … we’re all so excited,” she said. “It’s just this wild feeling of this amazing representation.”

Although Mahadevan said she doesn’t necessarily align with Harris’ politics, she was excited about “holding this person accountable to speaking up for our communities.”

Faraja Isingo brought his 9-year-old daughter, Fortney, to the White House Saturday evening to celebrate the historic moment. Isingo was born in Nebraska, grew up in Tanzania and returned to the United States when he was 12.

“First of all, I’ve come here and brought my daughter to witness this special event in her lifetime, Kamala and Biden,” Faraja said. “We are just so excited to witness the first Black woman elected as vice president, with her father from Jamaica and her mother India.”

Fortney wore sparkly white boots with fuzzy trim and held two sunflowers. She looked down at the White House from atop her father’s shoulders.

She said she wants to be a doctor when she grows up, “because I think it makes me smart, and I like to study.”

But she also said she thinks more little girls will consider the big house in front of her, “now that there is a girl who is gonna be vice president.”

Andrea Castillo covers immigration. Before joining the Los Angeles Times, she covered immigrant, ethnic and LGBT communities for the Fresno Bee. She got her start at the Oregonian in Portland. A native of Seattle, she’s been making her way down the West Coast since her graduation from Washington State University.

Ruben Vives is a general assignment reporter for the Los Angeles Times. A native of Guatemala, he got his start in journalism by writing for The Times’ Homicide Report in 2007. He helped uncover the financial corruption in the city of Bell that led to criminal charges against eight city officials. The 2010 investigative series won the Pulitzer Prize for public service and other prestigious awards.

Anita Chabria covers California state politics and policy for the Los Angeles Times and is based in Sacramento. Before joining The Times, she worked for the Sacramento Bee as a member of its statewide investigative team, and previously covered criminal justice and City Hall.