In pears, a lesson on loving things exactly as they are

A couple weeks ago, I ordered some Pink Pearl apples from a restaurant in my neighborhood. After I brought the brown bag home and opened it, however, I noticed the apples were a different color, bigger in size and ... pear-shaped! Because I had never seen a Pink Pearl apple in real life, I thought maybe I had lost my mind when reading the description, so I cut into the mystery pomme to see if it had the telltale pink blotches of flesh I had read about. Instead, I saw the telltale off-white flesh of a pear. For a couple seconds, my brain tied itself in a knot.

After my brain hit “reset,” I decided to try the pear anyway to see what I was working with. It had an intense pear flavor and almost pornographic juiciness. While I have always found pears mealy and insipid across the board regardless of variety or ripeness — an opinion shared by many people I know — that all changed after eating this mystery pear. The restaurant eventually gave me my apples, but I didn’t desire them any longer — I had found a new love.

The variety of the mystery specimen was a Comice, a variety beloved by the French for its intense aroma. And while I remembered eating Comice pears in years past, I don’t remember them tasting as good as this Pink Pearl changeling. I set about to see if this was a fluke specimen or if I did, indeed, like pears after all.

After a taste test of all the varieties now at my local farmers market and grocery stores, I found that I really just love Comice. Bartletts, Boscs and Anjous all have a stronger mealiness than Comice, which I can’t really root for (although I will acquiesce to liking the pear flavor in all of them). But when the flesh is firm, exceptionally juicy and wallops me with an aroma like the Comice? That I can get behind. Now, what to do with them?

Try as I might, I’m not someone who simply eats raw fruit for a snack — I like them in things. The challenge with cooking pears, however, is to find a way to make them shine on their own and not as a backdrop to stronger ingredients like blue cheese, dark chocolate and caramel, which are all touted as their complement in flavor. I didn’t want to use the pear as a prop for more assertive ingredients. Instead, I wanted to accentuate this heady pear aroma and let other ingredients, for once, take a back seat to it.

With that goal in mind, I decided to do the next best thing to eating raw fruit: mix it into a salad. Inspired by various chopped salads I’ve had over the years that combined large chunks of apple and cheese, I cut the pear into bite-size blocks and toppled them over butter lettuce, along with some mild semi-firm cheese cut the same size as the fruit (Gruyère is the universal choice, but the locally-available Toma from Point Reyes Creamery is even better). A creamy buttermilk-based dressing adds tartness to the salad and a sprinkling of toasted walnuts and sharp radish sprouts add the right amount of delicate bitterness and spice.

Thanks to this salad — and a little fall-fruit confusion — I’ve overcome my nostalgic prejudices and become, well, a pear person. I feel ashamed for having neglected them for so long, but now have resolved to make things right. I plan to eat as many as I can while the in-season specimens are still at the markets, waiting for more people like me to — whether by choice or fate — simply give them a chance. 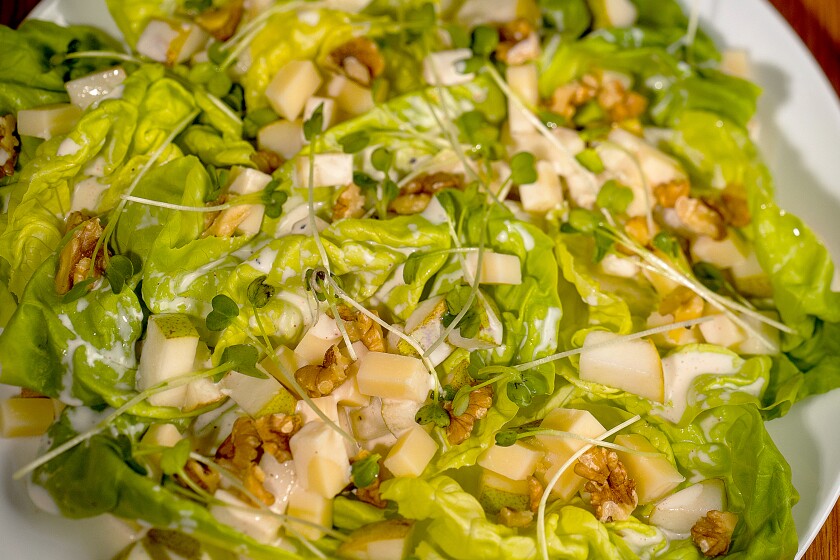