Kohlrabi sheds its fancy image in this humble salad

Kohlrabi suffers from a highfalutin image in the U.S. Popular with high-end restaurant chefs, it’s become synonymous with farmers markets and a particular world of food snobbishness that many believe exists there — although anyone who actually goes to a farmers market can tell you that’s not the case (well, not entirely). Because of this, it’s garnered an uptown vibe that makes it seem out of touch, something regular people can’t eat at home. That’s a shame, because despite this unwarranted notoriety, kohlrabi is a humble vegetable with a lot to offer those who give it a chance.

Like its more famous cousin cauliflower, it’s an everyperson crucifer whose flavor is middle-of-the-road, Goldilocks-ian in a great way — the type of vegetable that can be whatever you want it to be. Its lightly vegetal, relatively bland flavor makes it endlessly adaptable to however you want to flavor it. And though you can cook it numerous ways, I actually prefer kohlrabi raw — that’s when it’s at its crunchiest and sweetest.

Most of the time, I slice the eggshell-colored ball — though it looks like a root, it’s actually an enlarged stem — into thin wedges to drag through a yogurt-based dip or dressing. But for a proper recipe, I combine those elements in a twist on another modest dish that gets a fancy-in-a-bad-way rap: céleri rémoulade.

Traditionally made with julienned celery root tossed in a rich mayonnaise dressing, céleri rémoulade is a classic French bistro slaw that’s crunchy, cooling and creamy all at once. In my kohlrabi version, though, I use yogurt instead of mayonnaise to pair with the kohlrabi’s lighter, fresher texture; it’s a move I normally detest but one that works here. Julienned green apple adds tartness, red onion and whole-grain mustard lend a gentle punch of heat, and a pinch of ground cumin acts to echo all the earthy undertones.

The key to the salad’s success is to fashion the kohlrabi into the classic julienne cut that rémoulade is known for. I use a mandoline to slice the spheres into smooth, flat playing cards that are then easier to stack and slice matchstick-thin. It’s time-consuming but worth the effort to attain the fine straws needed.

Once tossed with the dressing, the rigid kohlrabi and apple sticks relax under its weight, making for a wonderful soft-crunchy salad that’s as comfortable sitting next to a pan-seared rib-eye or fillet of Arctic char as it is piled onto a cold-cut deli sandwich or topped with canned tuna. The dish gives kohlrabi an approachable versatility, freeing it from its elitist confines once and for all. 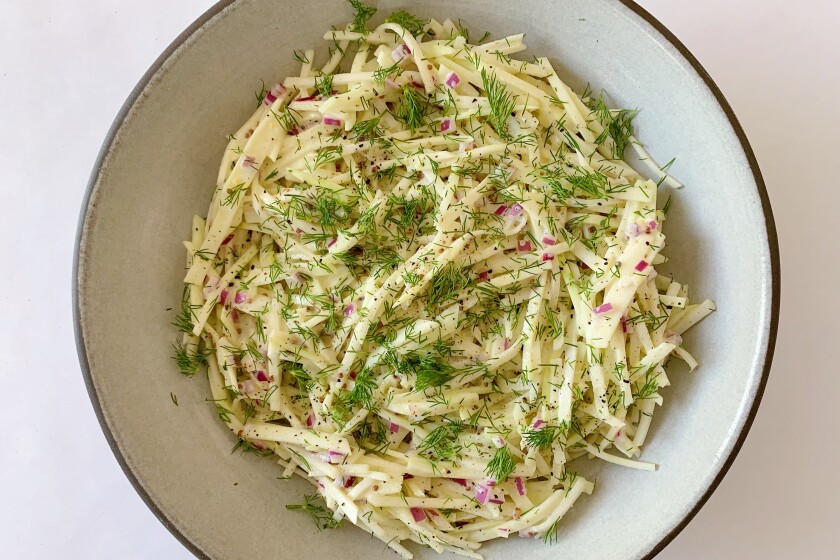 Kohlrabi and Apple Slaw With Yogurt and Cumin