In Ramadan, fasting is followed by feasting — and traditional dishes

Ramadan is the ninth and most sacred month in the Muslim calendar, a time of reflection, piety and charity for Muslims (even for those who are not particularly religious) when they fast from sunrise to sunset without even a drop of water going through their lips. It is said that the prophet Muhammad first received the Quran during Ramadan — and it is the only month mentioned in the Holy Book.

The dates change every year because Muslims follow the lunar calendar (this year Ramadan starts on April 12). The first day occurs with the sighting of the new moon and the last when the moon has reached its full cycle. The end of the month is marked by Eid al-Fitr (the feast of breaking the fast), which runs over three days when families and friends gather to celebrate.

Throughout the Islamic world, people break their daily fast as soon as the muezzin (the man who gives the call to daily prayers in the mosque) announces the setting of the sun. They ease back into eating and drinking by first sipping water, or they might select a sweet drink made by soaking apricot leather in water (in the Levant) or coconut milk-based drinks packed with jellied sweets (in Indonesia). Many will then follow with a few dates — always an odd number (one, three or five) and never too many — to follow the example of the prophet, who is said to have broken his fast with three dates. The faithful then retire to say the Maghrib (sunset) prayer before sitting down to their first meal of the day, known as iftar in the Arab world.

The iftar menu changes from country to country, but there will usually be dishes that are specific to Ramadan and that are served daily. One of these is tharid, said to have been the prophet’s favorite dish.

Tharid is typical to the Arab Gulf, in particular Qatar and the United Arab Emirates. It’s a composite dish that starts by spreading a layer of broken pieces of regag (a thin cracker-like bread made by rolling a soft ball of dough over a large round hot metal plate until it leaves a thin layer all over and cooks). That layer is then steeped in lamb broth; more regag is added and steeped in additional broth until there is a thick layer of bread, which is then topped with the meat and vegetables (usually carrots, zucchini and potatoes) that have been cooked in the broth.

There are variations on tharid throughout the Middle East: The Levantine version is known as fatteh, the Moroccan one goes by trid, and the Iranian one is known as dizi. Unlike tharid, where the dry bread is soaked with broth until it becomes very moist and silky, the pita bread used for fatteh is toasted or fried and is expected to stay fairly crisp for a lovely contrast in textures.

Fatteh varies depending on where you are in the Middle East, but the three main elements remain the same: a bottom layer of toasted or fried bread, a middle one of meat, vegetables and chickpeas and a top layer of garlicky yogurt (in Syria, a little tahini is mixed in with the yogurt), with a final garnish of toasted pine nuts.

In Egypt, rice and tomato sauce are added to the meat, often stewed sheep trotters (or feet), making Egyptian fatteh a heavier and less elegant dish than the Levantine version. The Saudi version is lighter, with crisply fried strips of eggplant and zucchini as the middle layer. For Moroccan trid, the dry bread is replaced by very thin, soft layers of dough that are cooked over a heated inverted earthenware jar that looks like a hat mold.

If you walk through the medina in Fez, it’s easy to spot women making trid, which is a mesmerizing spectacle. The dough they work with is soft, making it easy to flatten into a very thin layer by hand. The women keep their hands oiled by frequently dipping them in a tub underneath the wooden board on which they stretch the dough. Once the sheet of dough is paper-thin and almost transparent, they peel it off and quickly drape it over the hot inverted jar. It takes only a few seconds for the dough to cook.

The women in the medina spend their days making sheet after sheet, which they stack on a cloth to sell to home cooks who serve them topped with a thick chicken or meat stew. The sheets are scrunched up and arranged in an uneven layer over the bottom of a large shallow serving bowl and the thick sauce from the stew is spooned all over before the chunks of meat are placed over the trid.

The Iranian dizi is eaten in two parts. It is usually the preserve of specialist stalls or restaurants where the proprietors will often have a bakery section at the back to make sangak, the special bread baked over pebbles that is used in the dish. (Some may dispute its connection to tharid but I believe the principle of a bread-based dish is the same even if the presentation differs.)

Dizi consists of a hearty meat, chickpea, dried bean, tomato, onion and potato stew cooked in the jar of the same name. Once the stew is ready, the hearty and flavorful broth is poured into a separate bowl and torn pieces of sangak are placed in it to soak, while the meat, chickpeas, beans and vegetables are mashed with a metal or wooden pestle in the jar. You then eat the broth-soaked bread on its own or together with the mashed stew, with raw onions and fresh herbs on the side. 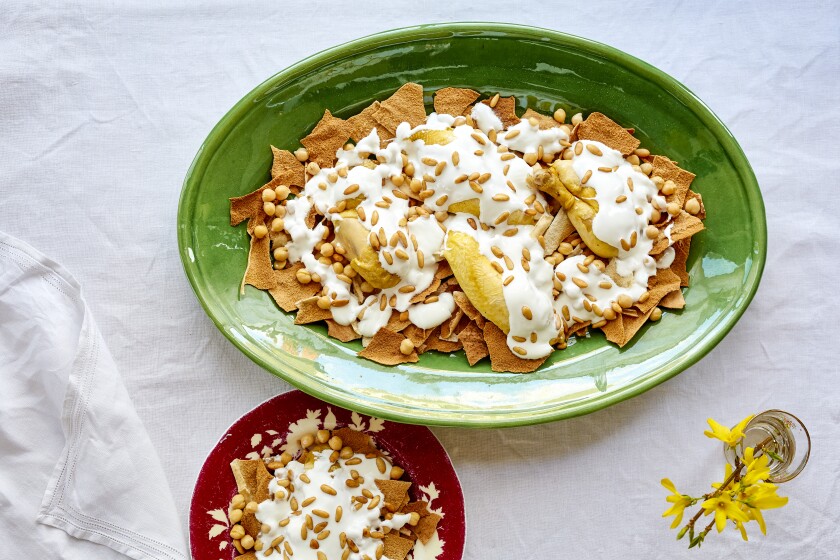