The freedom, and serenity, in using prepared artichokes

We all have cooking tasks that, for whatever reason, we simply refuse to do — the thought of doing them prompts feelings of dread or disdain. When I think of the arrival of spring each year, I’m reminded of my personal hell: preparing artichokes.

It’s prime artichoke season and although I love seeing the pyramidal stacks at farmers markets and encourage anyone curious to cook with them, it won’t be me. I know that won’t win me popularity points with a California readership, but let me explain.

I grew up in the South at a time when artichokes came only in cans or jars or from the freezer. My mother would always make what she called “artichoke tea sandwiches” with canned artichokes, chopping and mixing them with mayonnaise and dry ranch dressing seasoning before slathering the mix between two slices of wheat bread. She’d trim the crusts, as you must do for tea sandwiches, and set them in the fridge to get nice and cold before a party. The result was kind of like a vegan tuna fish sandwich before I knew such a thing existed.

In culinary school, when I first encountered fresh artichokes and their impenetrable outer petals — botanically, the part we eat is an immature flower bud — I was intrigued. But when I learned that before they are cooked they must be “turned” — painstakingly trimmed, pared, de-spiked and de-choked, all before they turn brown from air exposure — I felt … exhausted. The ratio of preparation work to taste payoff was egregiously unbalanced.

I appreciated knowing where the canned iterations came from but with my eyes opened to what it took to get them there, I vowed to never subjugate myself to such masochism again. Artichokes would just be something I didn’t eat again, and I swore off cooking them unless forced to for work.

Of course, I learned later that you can boil or steam the whole thing and break off the petals with ease, one by one, to dip in butter or mayonnaise, but even that seemed like too much work to someone not raised on the practice. And as much as I now understand the value of the work that goes into preparing them for cooking, I place a higher value on the time it takes to cook almost anything else. That said, I’ll gladly spend hours picking minuscule nibbles of meat from crawfish shells, so we all have our contradictions.

Now firmly entrenched in eating artichokes only from their pre-cooked forms, I rediscovered how much I love them and how wonderful they are. But like crab and oysters, artichokes rest in a sort of alien realm where their distinct flavor and form defy neat categorization. Instead of treating them as a “vegetable” — they possess neither the virtuousness of the dark leafy greens nor the fiber-wellness cachet of brassicas — I serve them only as an appetizer, hors d’oeuvre or starter course, where they can show off their individuality.

For a great way to start a summer picnic, I lean on those aforementioned tea sandwiches my mom made, except I make them with more fresh herbs and a lot less mayonnaise. I cut them into finger-size blocks, as intended, and pass them around to guests in the cold Tupperware container I brought them in.

If I’m entertaining at home, I pull out the simplest appetizer of all time, an idea I got from my friend Helen Rosner. She pours a jar of oil-marinated artichoke quarters onto a baking sheet and bakes them in a high-heat oven until the artichokes sizzle and crisp in the oil. Like Italian fritti but without the mess of deep-frying, they’re a one-product hors d’oeuvre that only needs a sprinkling of flaky salt and a squeeze of lemon while still piping hot from the oven before serving with cocktails.

In the dip world, spinach and artichoke reign supreme. As wonderful as that pairing is, there are plenty of recipes out there for great versions, from bubbling hot dishes loaded with cheese and cream to easy vegan iterations stuffed in bread bowls. I like artichokes in a simpler, less dairy-dependent mode. Taking inspiration from another Mediterranean world staple, I use grilled, smoky artichokes as a base for a baba ghannouj-like dip.

I blend char-speckled grilled and marinated artichoke quarters — easily found in grocery stores or you can use Helen’s “oven-fried” version — with lemon juice, garlic, cumin, tahini and olive oil until silky smooth. Slightly more tangy in taste than the eggplant version, the dip is simpler than the traditional since you’re not having to blacken and peel eggplants.

While I am bound to the convenience of canned/jarred artichokes, on the rare, once-every-two-or-three-years occasion I willingly deal with fresh ones, I’m making one thing: Roman-style artichokes, or carciofi alla Romana. Stuffed with parsley, mint and garlic, pared artichokes are arranged upside down in a pot then braised low-and-slow in wine and olive oil, their stems jutting up like pier posts from the water at low tide. Tender at the heart and deeply caramelized and crisp on the edges of their petals, it’s an elegant, simple preparation that I find to be the only artichoke dish worth the trouble.

But for my appetizer-ready version of the dish, I transform the same ingredients into an elegant tart. I lop off the bottoms from canned artichoke hearts and puree them with herbs, garlic and wine, then add an egg to bind everything together. This is spread over a rectangle of puff pastry then topped with the artichokes’ petal clusters arranged in a striking pattern. Once baked to a puffed and crunchy golden brown, the tart delivers the same elegant appearance for even less effort.

You can use your freshly prepared artichokes for these recipes, but why bother? Save that work for showing off the artichoke in all its gothic glory. These recipes, using convenient canned or jarred versions, return proper balance to the work-to-reward ratio of cooking with them while highlighting their idiosyncratic flavor. They’re artichoke recipes for those of us that love them but also want to maintain our sanity. 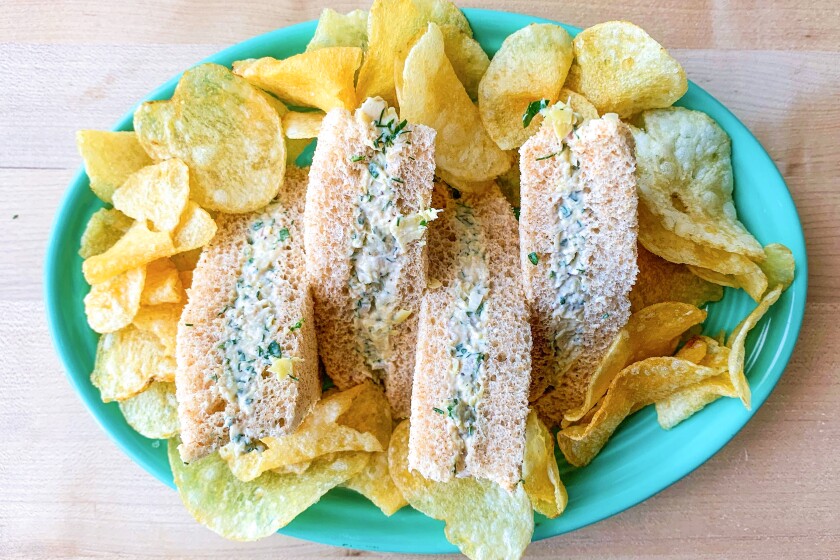 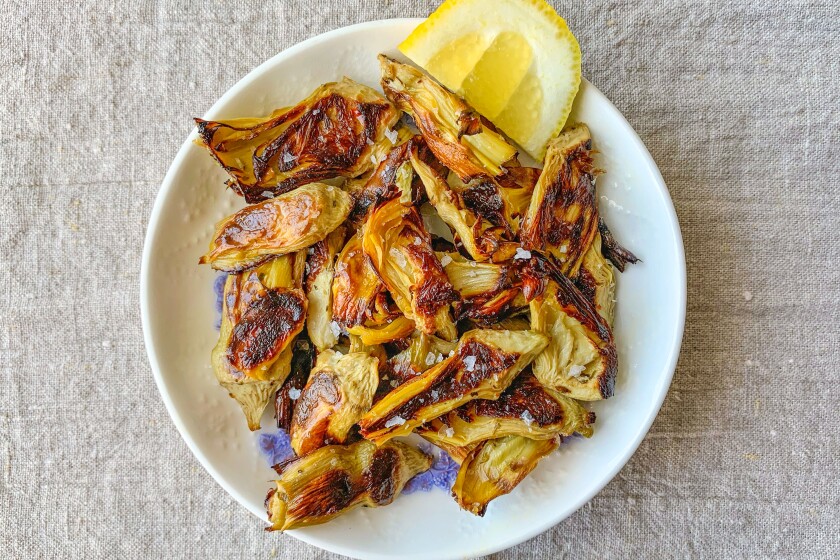 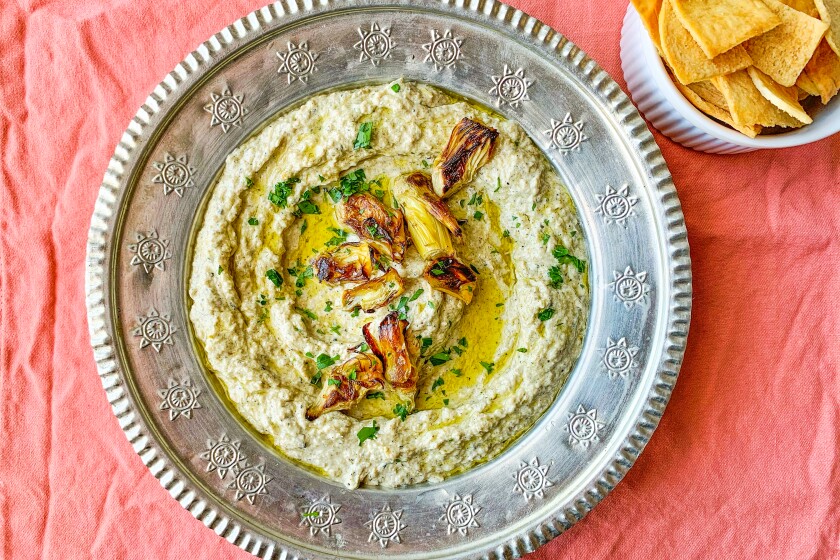 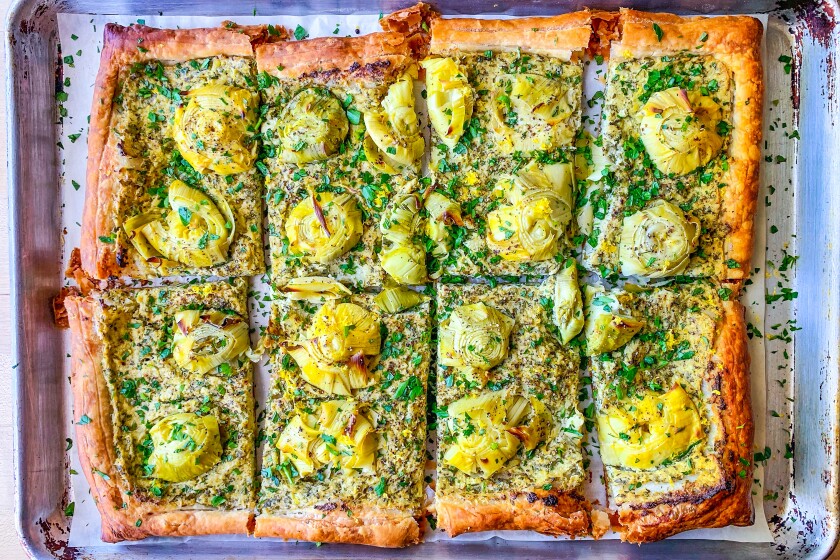