On Wednesday, Porsche came with a pair of GTS models, the Dodge Challenger Hellcat stunned the crowd while the Ford Explorer captured the popularity contest at the L.A. Auto Show, which opens Friday to the public. You can have a front-row seat as Times reporters blanket the Convention Center.

You're reading updates from the Wednesday press day. Click here to view the latest updates.

Highlights from the show:

The Mini will come with a mini scooter 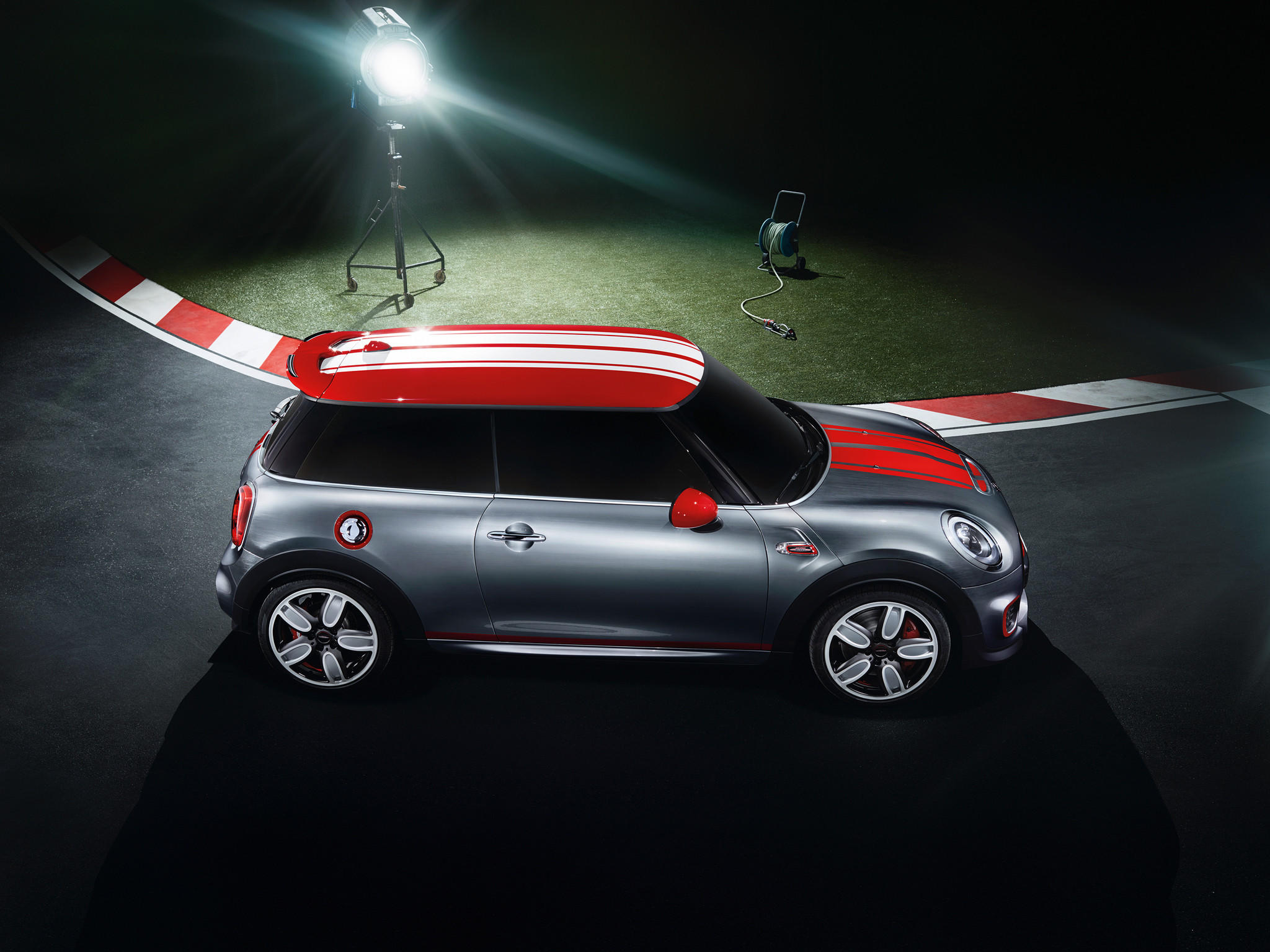 The automaker will be showing off, for the first time in the U.S., its Mini Superleggera Vision roadster concept car, which the company calls “British with an Italian accent.”

Meant to be a vision of the company’s future, it will be displayed alongside a classic Mini and a Mini Hardtop 4-door, also making its North American debut.

The surprise in the bunch is the Mini Citysurfer – a 40-pound electric scooter that fits inside a mini’s storage space.

This Saleen looks like a shark.. Even the color is right..... I want it for that reason alone. #LAAutoShow pic.twitter.com/ZWFllltwJf

A virtual tour inside a Volvo

There was a @Toyota guy at today's @LAAutoShow who spent the entire day driving in circles in this: pic.twitter.com/hTyqZqM5Ke

Mazda is one of the favorites

People keep asking what my favorite debut is so far at the @la_auto_show. @mazdausa's CX-3 is high on that list. Sex appeal where it shouldn't be. One drawback is a high load floor cutting into cargo room.

Mazda updates to keep up with the competition 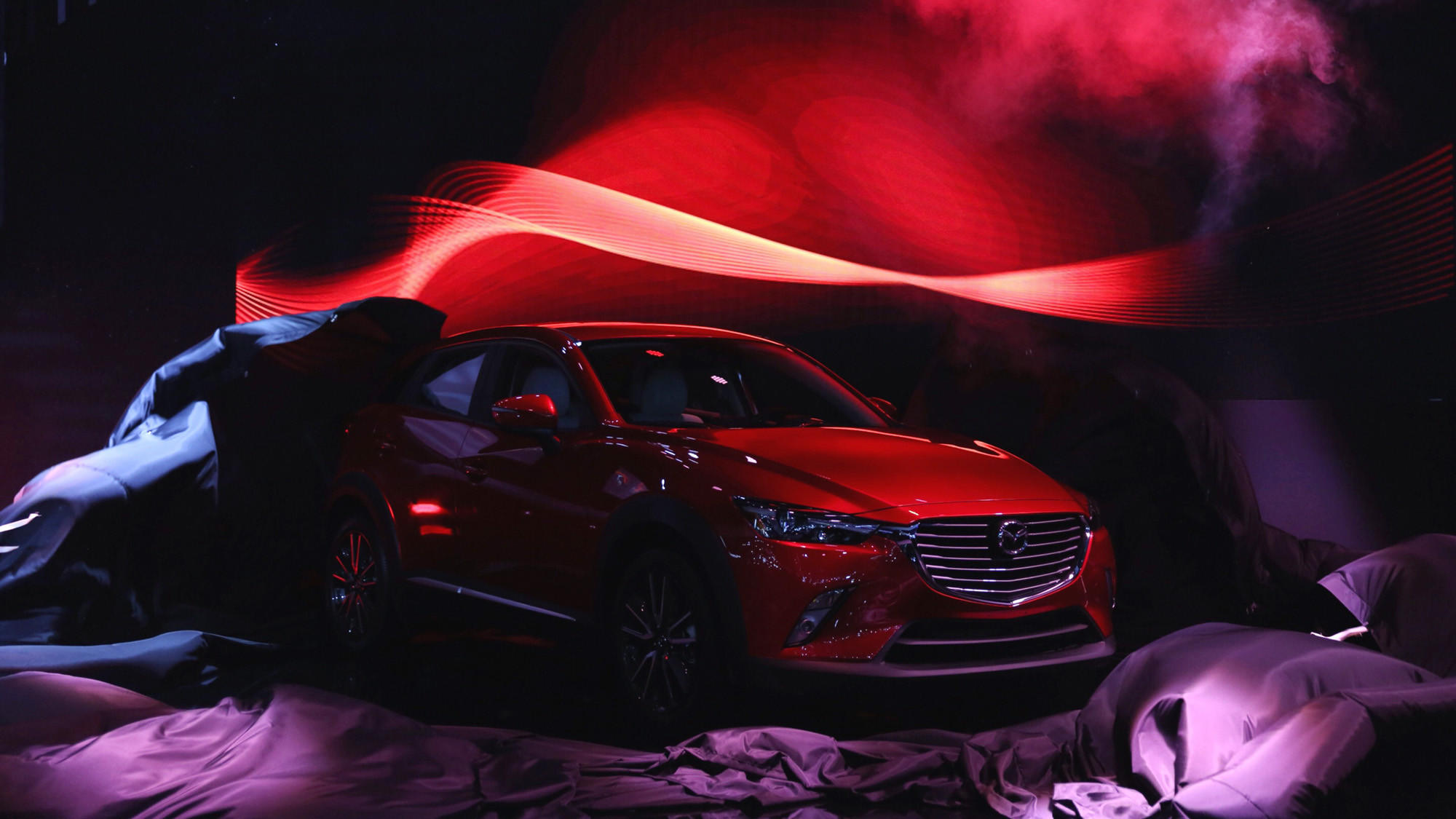 With sales way up this year, Mazda’s CX-5 crossover is the hottest vehicle the brand offers. But that doesn’t mean the small Japanese automaker is going to sit back and count cars.

It unveiled a series of improvements to the crossover at the Los Angeles Auto Show on Wednesday, including better fuel economy, more safety features and sleeker sheet metal.

Keeping the CX-5 fresh in the increasingly competitive crossover market is a must for Mazda. The vehicle is a linchpin of its strategy to boost U.S. sales.

Vintage VW Bug fitted to be an e-Bug 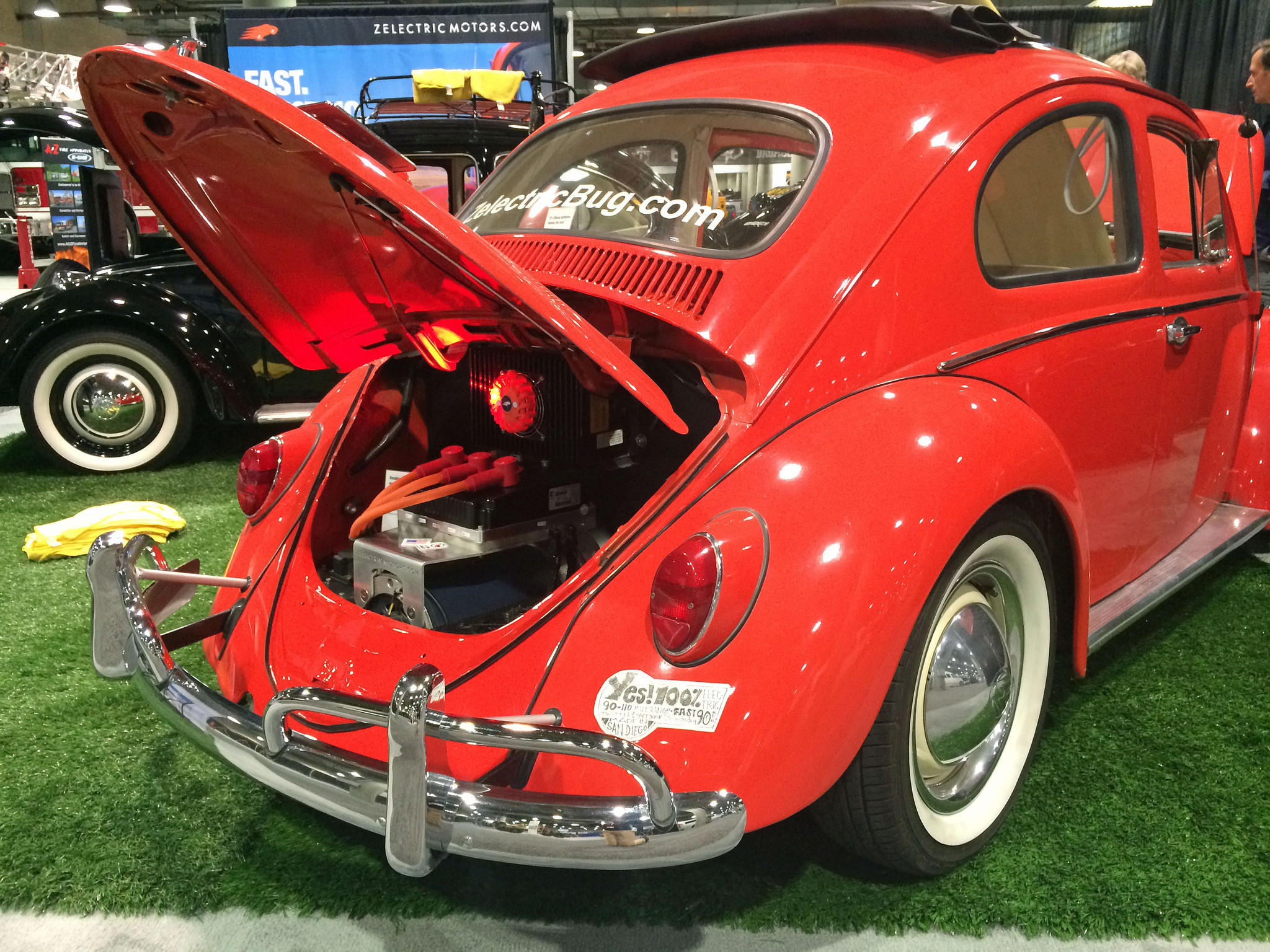 It’s not all glossy new vehicles at the LA Auto Show. There are some glossy old vehicles here, too, with new technology.

Like, a vintage VW Bug, aftermarket-outfitted to be a e-Bug.

Zelectric Motors of San Diego has been making electrification packages for vintage V-dubs for a while. They’ll modify your existing bug, or restore one and sell you that. The refurbished electric vehicles go 90mph, have a range of 90-100 miles, and cost about $50,000, said the company’s Bonnie Rodgers.

The electric Beetles have their engines in the rear, just like the traditional gas-powered ones, and carry their batteries up front in the “trunk,” next to the spare tire.

These cars will make the neighbors talk

Check out a few of the exotic cars at the #LAAutoShow https://t.co/S9zOgEEirn

Who's responsible for connectivity in cars? 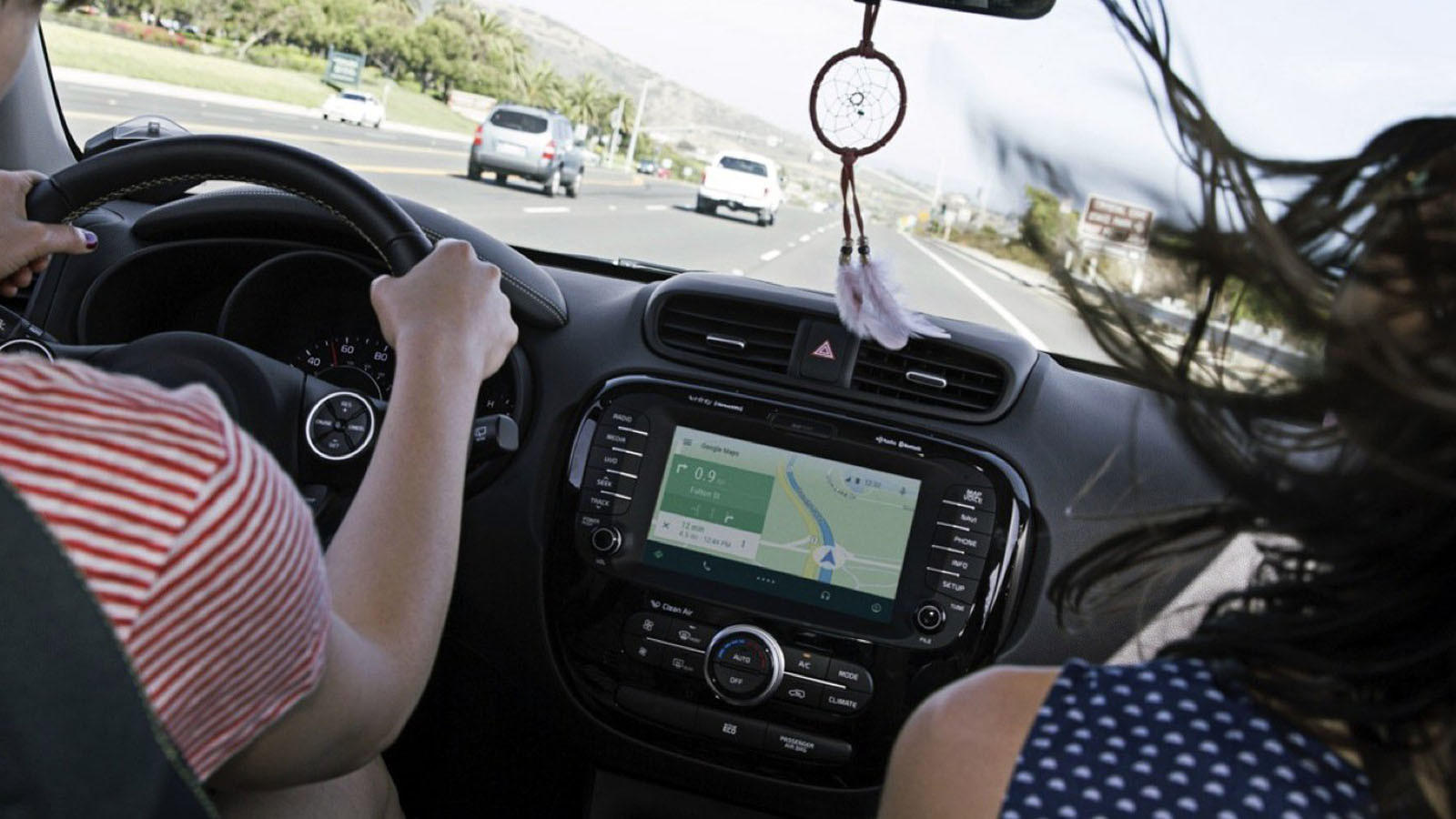 "Saying everyone is going to have the same experience in the car is not the way this is going to play out," said Konstantin Othmer, chief executive of CloudCar. --Sarah Parvini 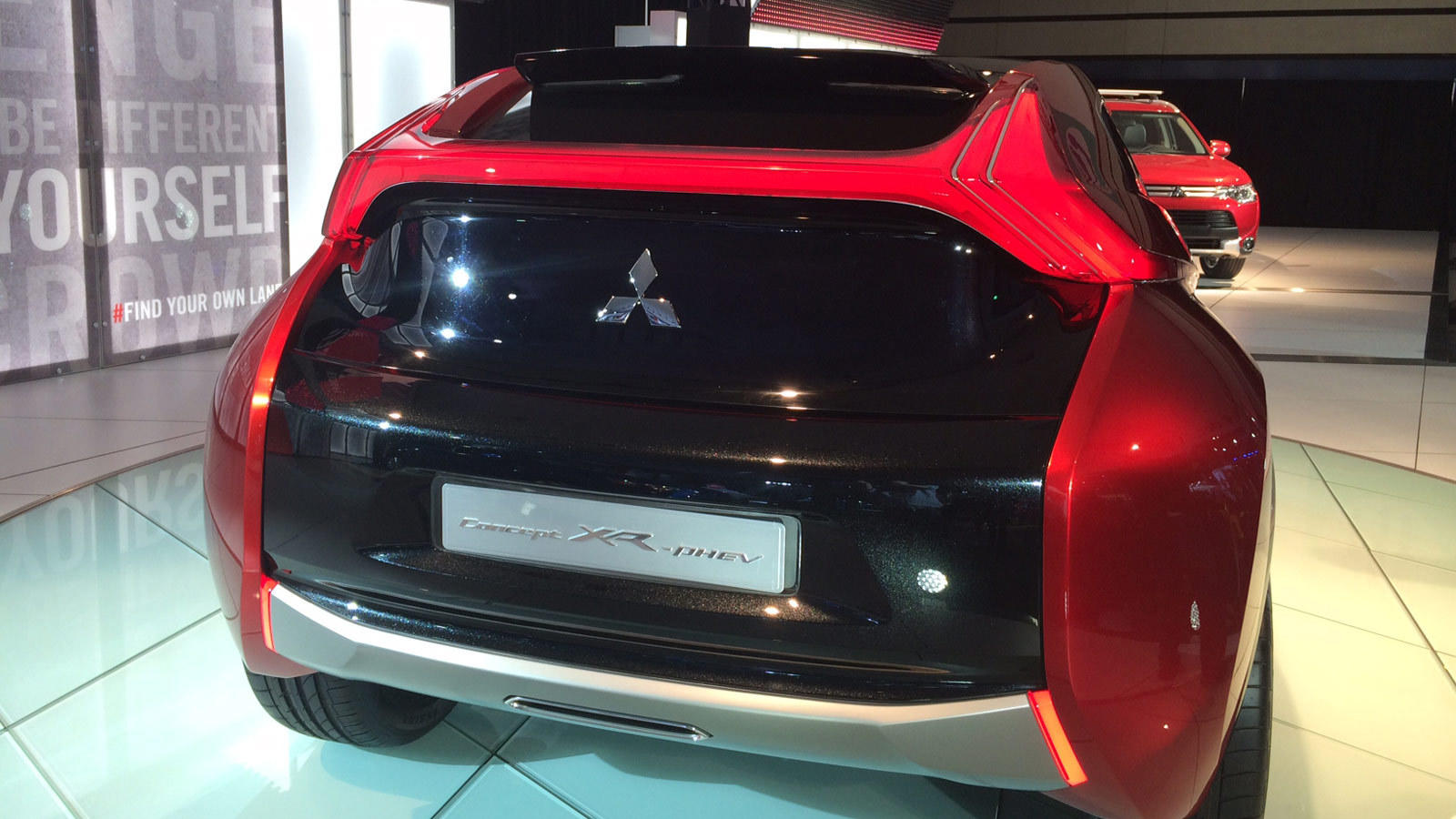 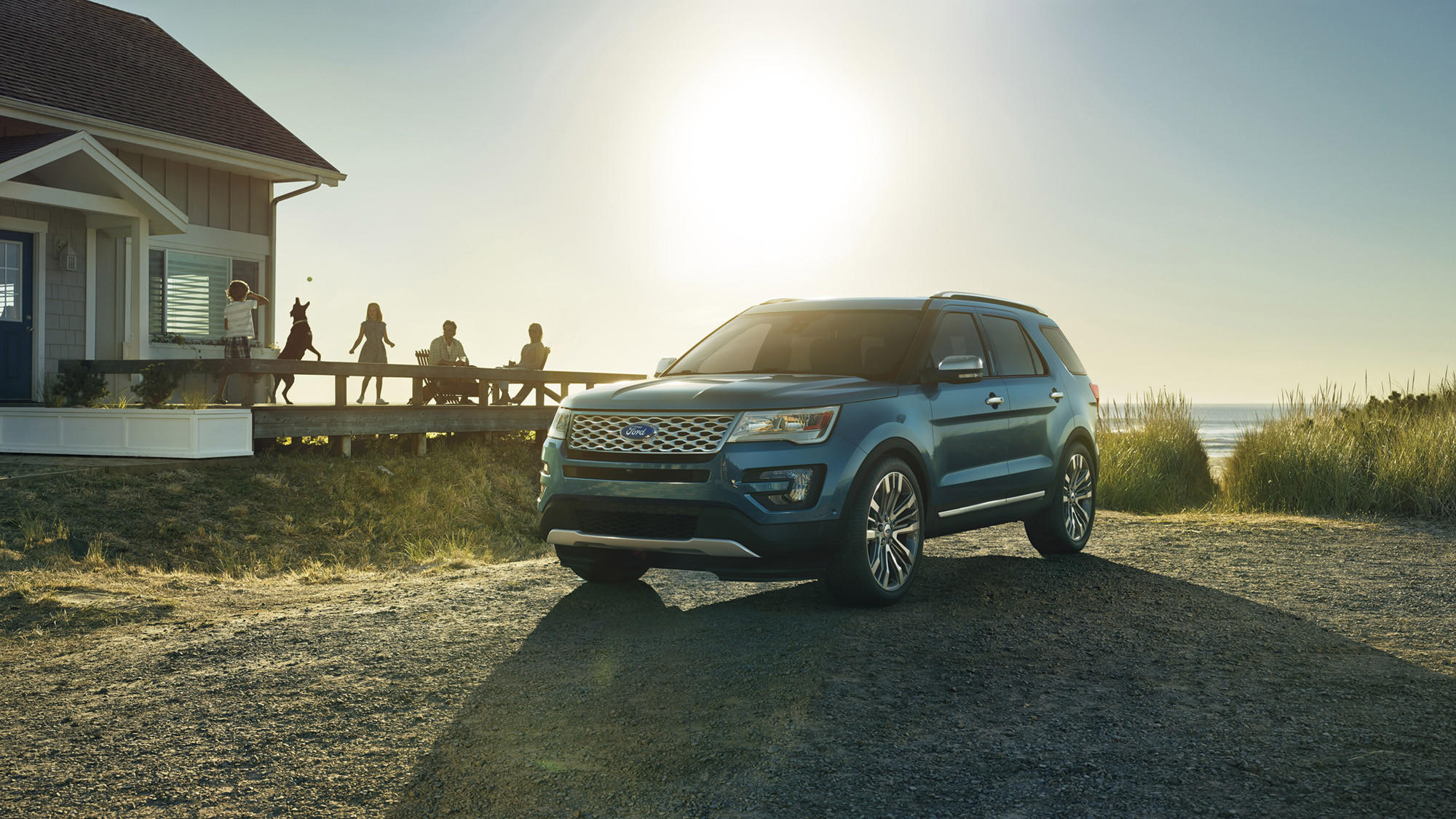 The Explorer, now in its fifth generation, has done well despite the current version marking a dramatic departure from earlier models. The Explorer is no longer a boxy, old-school sport-utility based on a pickup truck but rather a modern crossover with sleeker, curvy styling. --Jerry Hirsch 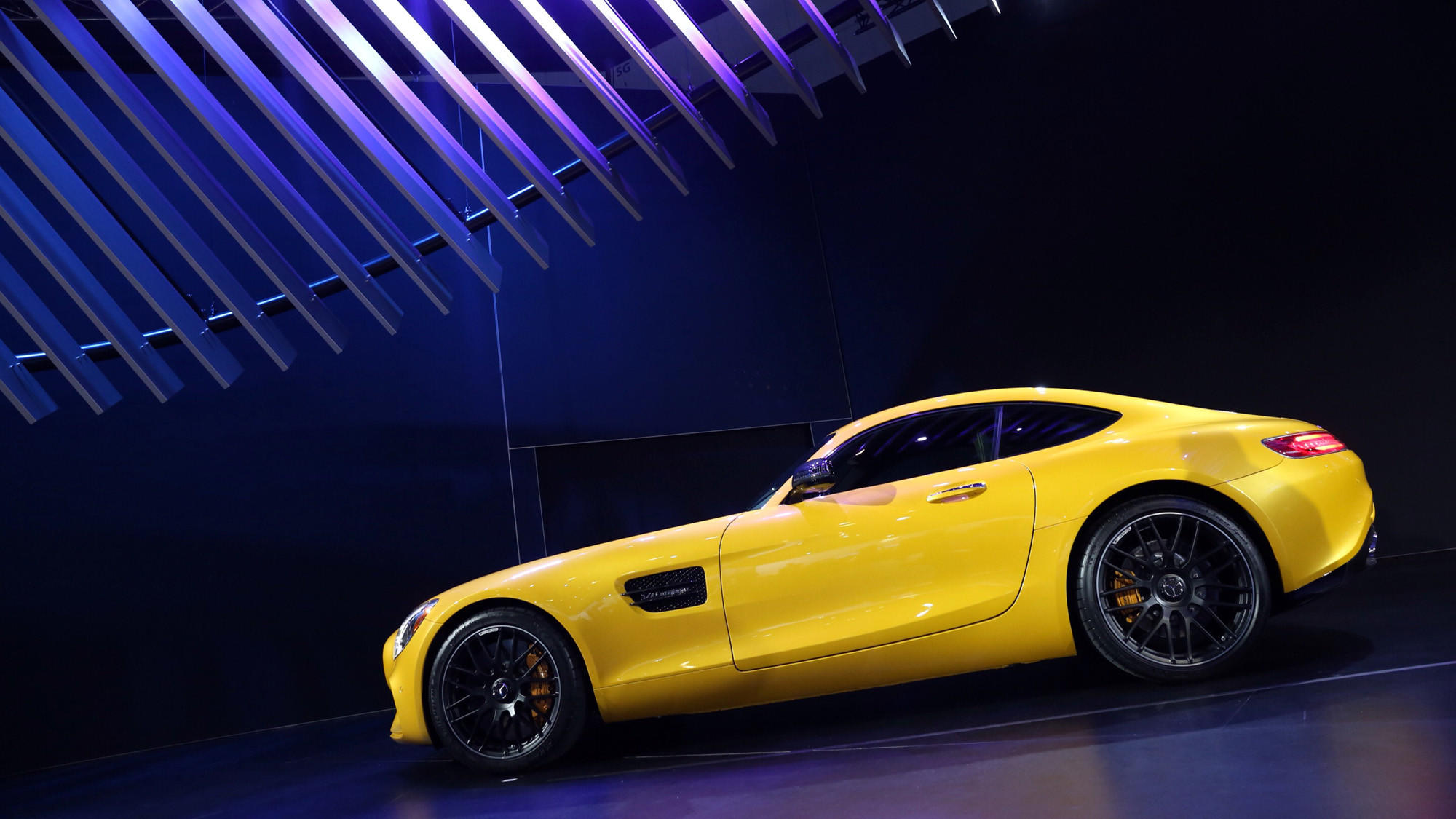 As an engineer and sports car fan I can promise you this car is really, really fast and suitable for everyday use.
Tobias Moers on the Mercedes-AMG GT 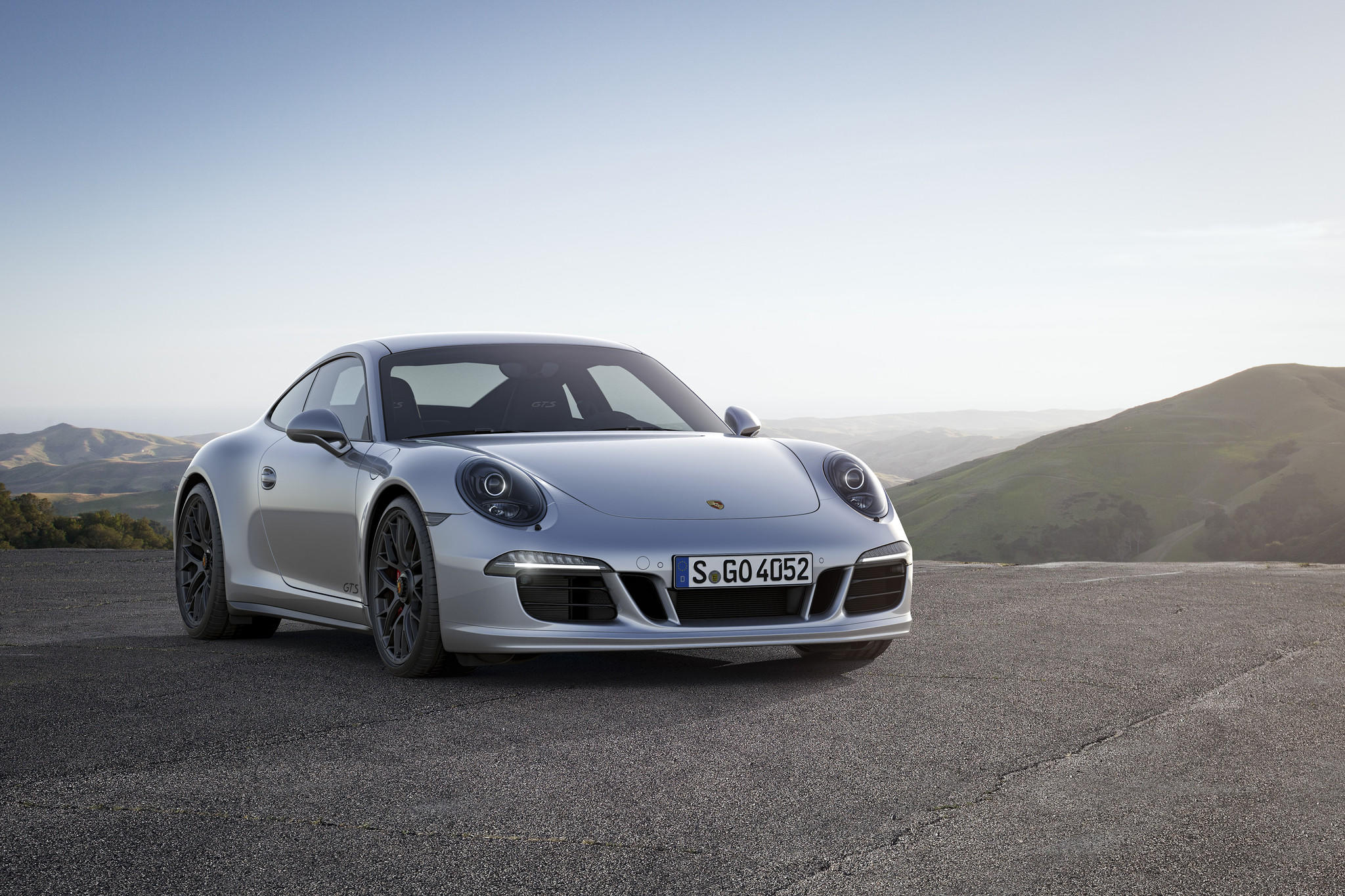 Porsche is coming to the L.A. Auto Show with a pair of GTS models from its 911 and Cayenne lines, along with an exclusive new Panamera.

The top performer of the trio is the 911 GTS, powered by a 430-horsepower rear-engine power plant that rushes from zero to 60 mph in 3.8 seconds when equipped an automatic transmission. The engine produces a whopping 325 pound-feet of torque. Top speed: 190 mph. -- Charles Fleming

Mercedes shows off the AMG

Ignoring all the rules 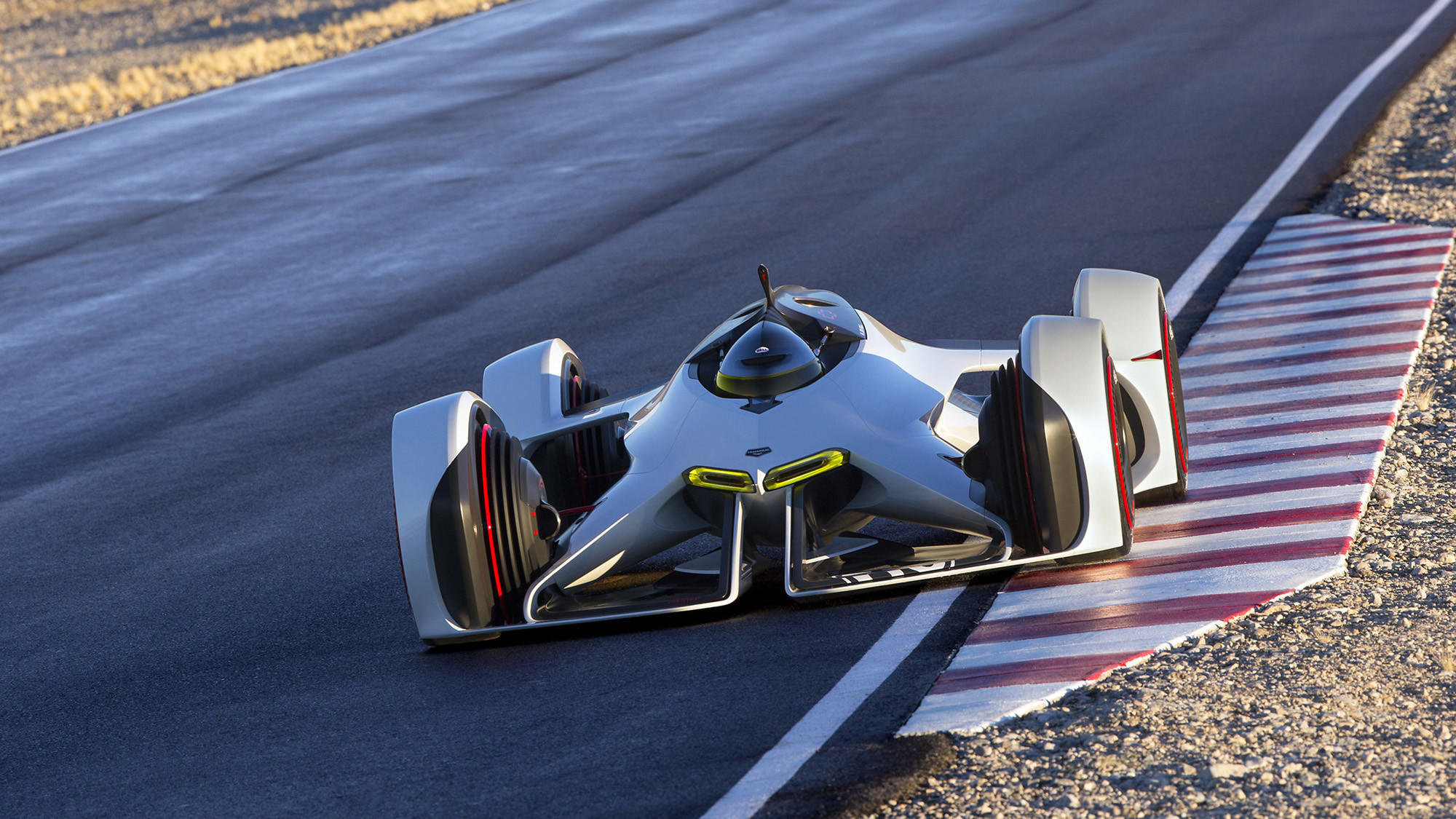 When General Motors designers created the Chevrolet Chaparral concept car for the Los Angeles Auto Show — and a digital version for the Gran Turismo PlayStation game — they tossed out all the rules they believe stifle innovation in auto racing.

Regulations designed to contain the expense of fielding an IndyCar race team also smother innovation in aerodynamics, suspension and engines, they said. Starting last year, for example, all cars must run on a twin-turbocharged V6. No V8s allowed. Forget about more exotic technology such as turbines. — Jerry Hirsch

Patrick Dempsey, from 'Grey' to red

It picks Corvettes out of its grill

The Dodge Challenger Hellcat: When you absolutely, positively have to kill every other muscle car at the drag strip. pic.twitter.com/gEcY6RmuVW

New and refreshed, the Ford Explorer 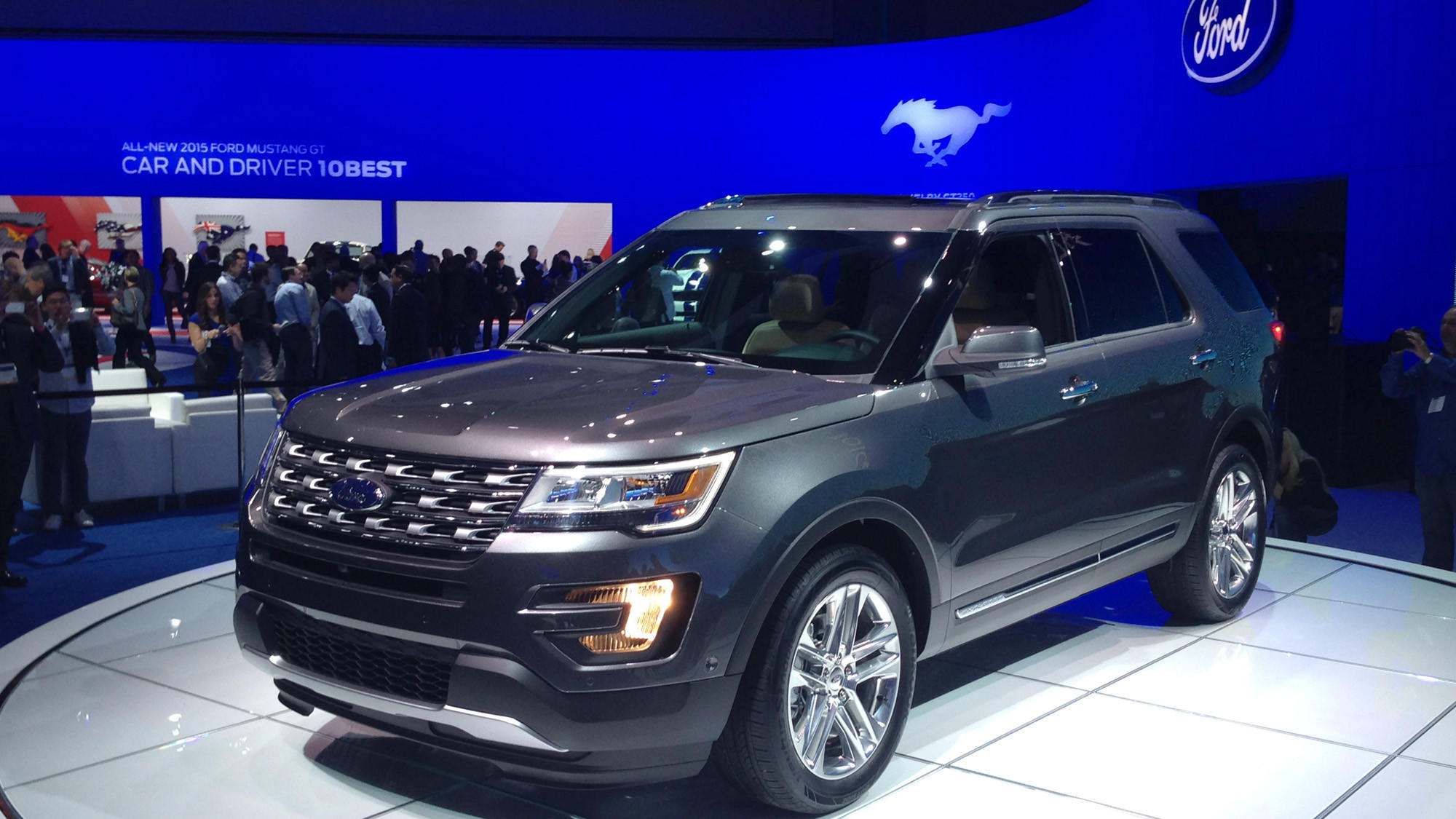 Under gut-thumping electronic dance beats, following an opening pep talk that boasted of 7 million Ford Explorers built and one sold every two minutes since the vehicle’s 1990 inception, Ford’s Jim Farley emerged from a wrapped 2015 model to promote the popular utility vehicle to an extremely enthusiastic crowd.

Using a video TelePrompTer to read a lively speech, Farley said 23% of the company’s vehicles, globally, are utility vehicles – a number he said would rise to 29% by the end of the decade.

The newly refreshed Explorer comes in three flavors, in Limited, Sport and Performance packages. The Platinum, among other things, features a 3.5-liter version of Ford’s Ecoboost engine that cranks 260 horsepower and 350 pound-feet of torque.

A Chrysler in every pot 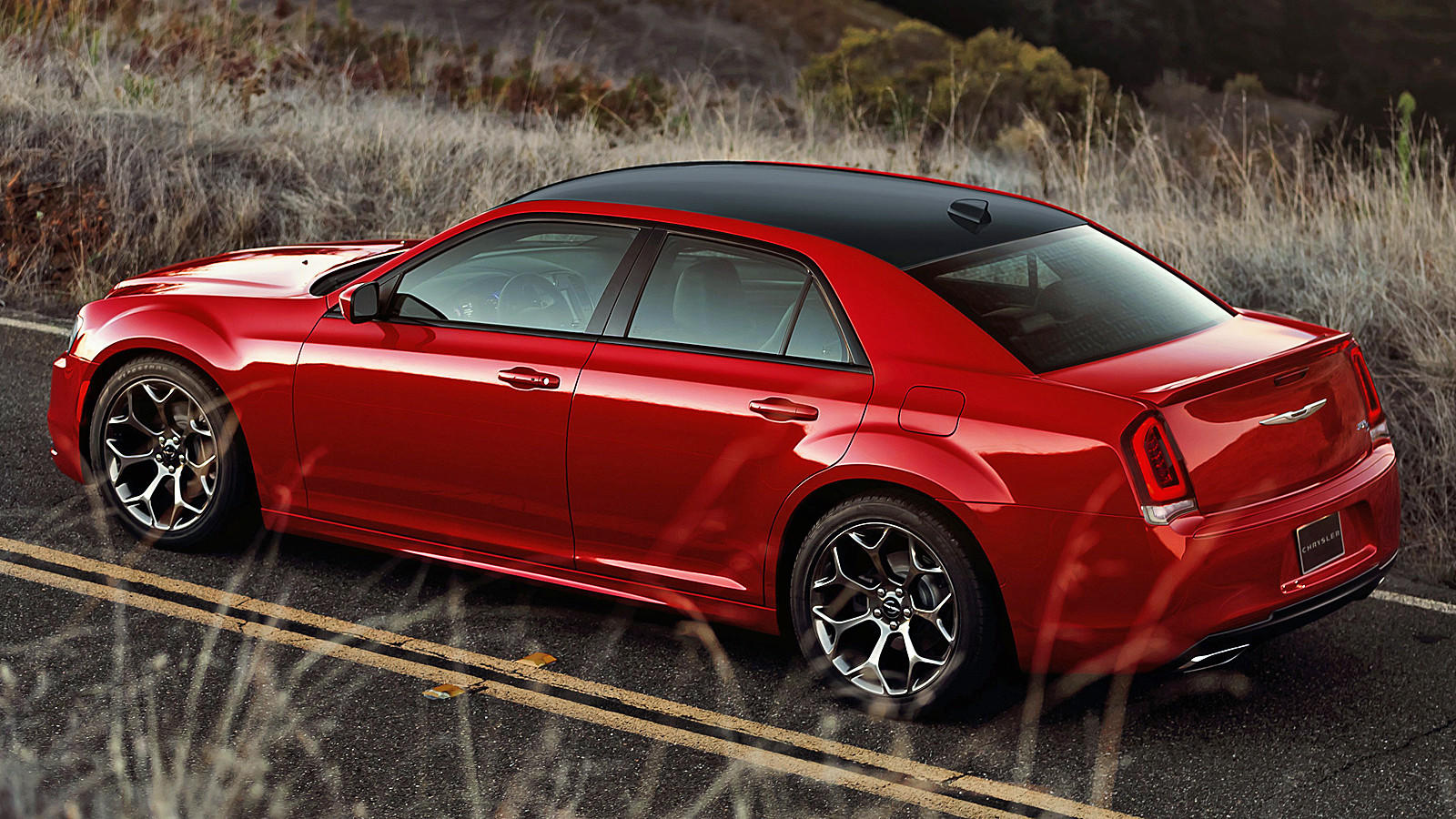 Sounding a patriotic note and retro-sounding promises that offered everything but a chicken in every pot, Chrysler CEO Al Gardner unveiled the company’s 2015 300C by saying, “Elite cars are not reserved for the elite. Everyone deserves a car they can be proud to park in their driveway.”

The burly new update on the company’s 1955-year middle-class muscle car is a “big, bold car,” Gardner said, a combination of “balance, elegance and performance – affordable to all.”

In appearance, the new 300 resembles a Bentley, with 20” wheels.

Audience reaction? Respectful applause, as the new 300 spun on a turntable under flashing lights.

Mercedes: A hybrid, a facelift and new models

While most automakers are content to bring one model to the Los Angeles Auto Show, Mercedes-Benz is unleashing several garages full of high-end hardware.

The Maserati Alfieri, named after one of the brothers who created the logo. #laautoshow #hyperlapse

SpongeBob has made an appearance, in the form of the @Toyota Sienna and he blows bubbles. #LAAutoShow pic.twitter.com/S5FZdEJDHr

Out from under the hood

Just a few of the engines on display at the #LAAutoshow https://t.co/4gKJc9NddK

Is this the future? It's the @Toyota FV2. It's tiny, got 3 wheels and moving graphics. #LAAutoShow pic.twitter.com/lebka7fhSB

Volkswagen has joined the hydrogen fuel cell movement, with new technology developed entirely in-house and a promise to make its Golf the first vehicle ever to be offered in all available power trains — gas, diesel, electric and now hydrogen.

The “research” vehicle — more than a concept, but not quite a production vehicle yet — is a full-sized SportWagen, losing some interior space for the fuel tanks.-- Charles Fleming

Bubbles for those in the back

Most elegant car at #laautoshow? Infiniti's Q80 Inspiration features a champagne caddy in the back seat pic.twitter.com/5fXX51t8a9 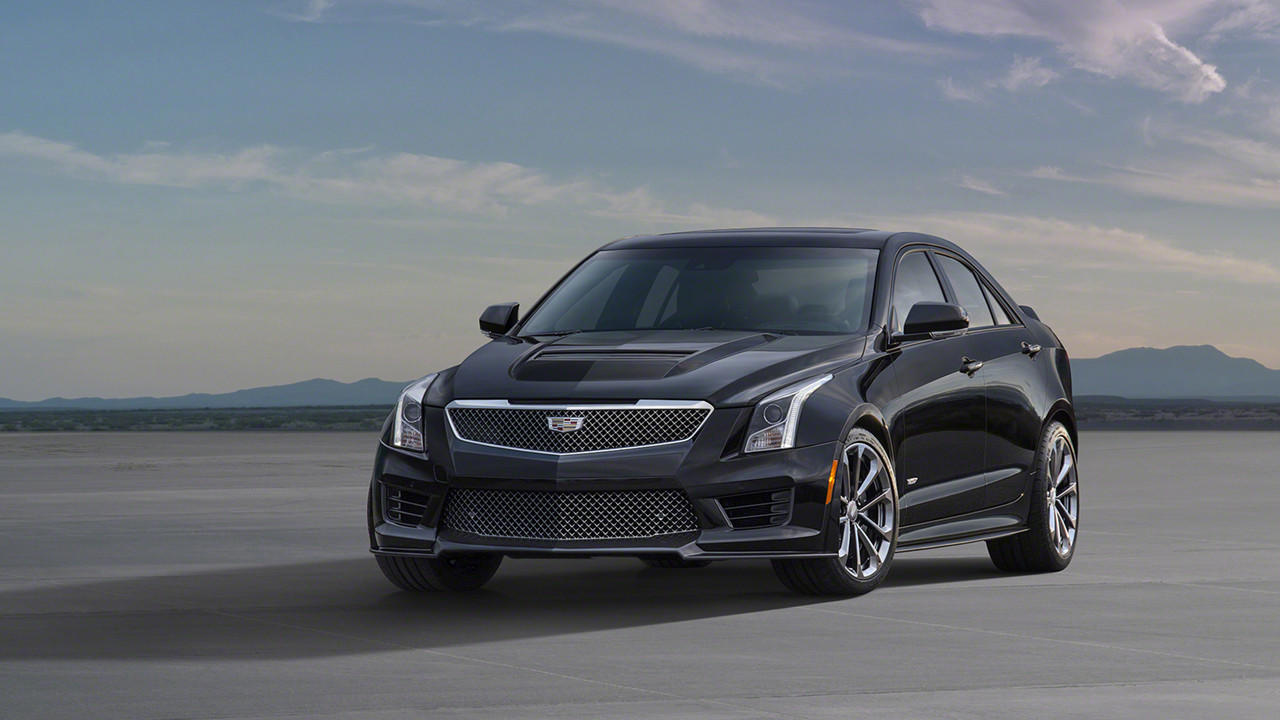 All up in that grill

Can Audi's grill get any bigger? Yes, it can (But the new concept design is gorgeous) https://t.co/1zgRAUCyW9

Although the brand has had a modest sales increase this year, its U.S. sales growth over the last five years has lagged the industry's by a wide margin — 37% compared with 50%.

Mazda hopes another strong model, in the hottest segment of the auto market, will put the company on the road to bigger sales.

The five-passenger CX-3 shares architecture with the Mazda2 subcompact sedan and a 2.0-liter, four-cylinder engine with the larger Mazda3. It will compete in a burgeoning field of small crossovers that includes the Buick Encore and Honda's HR-V. The Honda is also set to debut at this week's L.A. Auto Show.-- Jerry Hirsch

'Ladies and gentlemen, this is the new face of Audi' 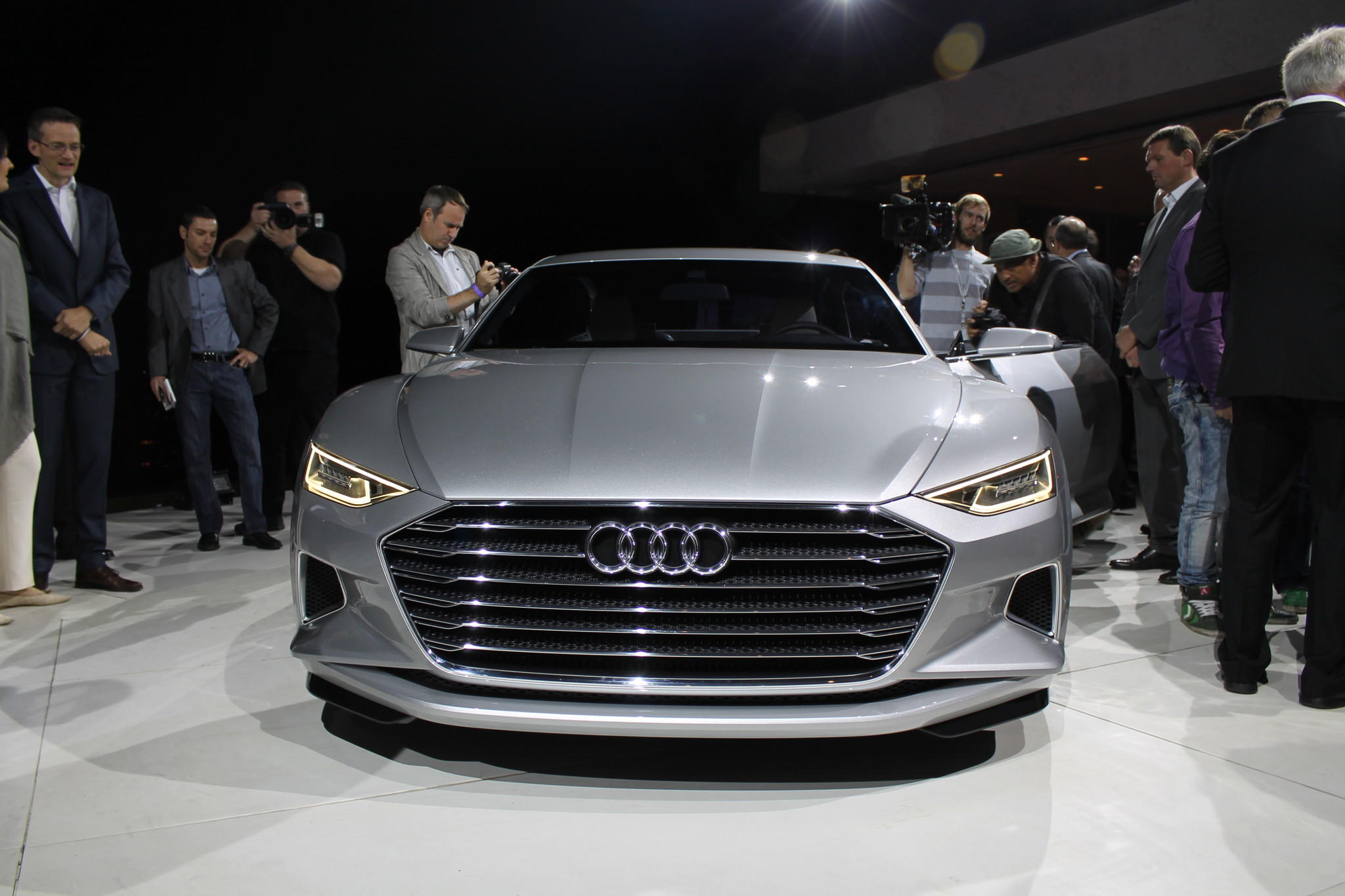 Audi granted a view of its future Tuesday night, high in the Hollywood Hills at a lavish debut for its all-new Prologue concept car. The sleek coupe is a look at the new design direction for all upcoming cars from the German brand.

“The car has to be timeless but also fashionable,” Marc Lichte, Audi’s design chief, said. “The car should work for six, seven, eight years. In that time, there are eight generations of iPhones.” -- David Undercoffler

The British luxury brand unveiled the Grand Convertible on Tuesday night ahead of its appearance at the L.A. Auto Show.

This concept is essentially Bentley’s recent Mulsanne Speed sedan with its roof artfully sawed off. Bentley, owned by Volkswagen, is using the concept to gauge customer reaction; that reaction will determine whether the car becomes a traditional production vehicle or a one-off specialty car built in tiny volumes. — David Undercoffler 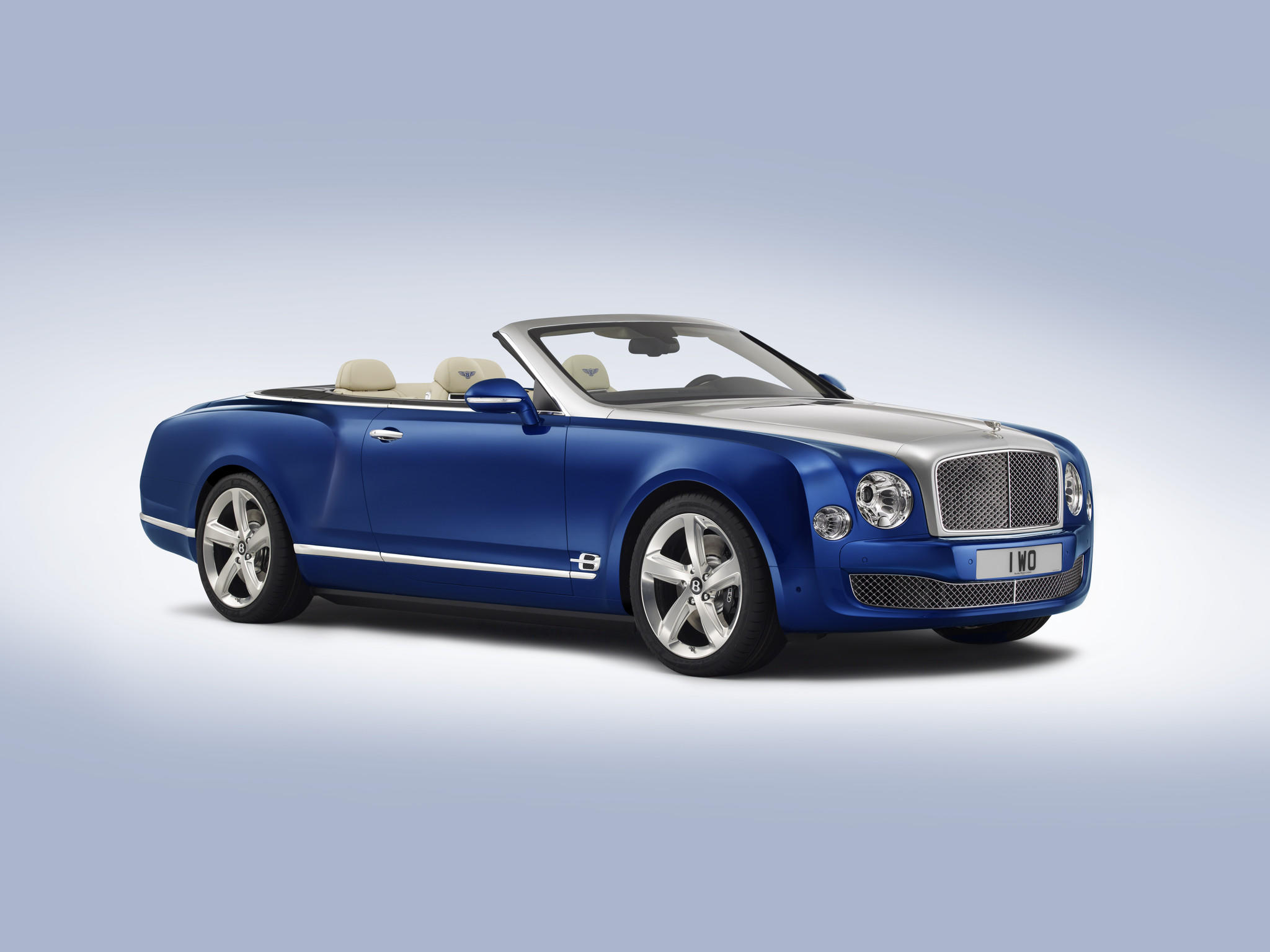 The hackers could be eyeing your car next

The future of transportation is all about connections -- to the Internet, to other cars and more, experts at the L.A. Auto Show said Tuesday.

As automakers ramp up their defenses to hacking, they have to be looking at multiple fronts. There's the car itself, the devices a user brings into a car and online storage spaces where companies are storing data about drivers, their driving and their vehicle. — Paresh Dave

How cars will read your mind in the future

If you’re driving past a castle, for example, the passenger should be able to instantly pull up information about the landmark.

If a driver’s children are screaming the backseat, the car should know to switch the programming from loud music to trivia or a joke. An intuitive interface might pull in points of interest from the outside environment, turning it into a game to keep the kids occupied.

The car should also slowly learn the driver’s personality, anticipating whether she would look for the cheapest gas station or the closest one when it’s time to fill up. The vehicle would be able to take a grocery list and order it from Amazon or from Whole Foods. —Sarah Parvini

Stop what you're doing and think about all the scenarios

Automakers face a bleak future if they don’t make aggressive bets about the future of cars, according to Peter Schwartz, a renowned business strategy consultant.

In the worst-case scenario for traditional automakers, digital invaders like the Googles and Apples of Silicon Valley produce a fragmented market that slows adoption of connected cars and leaves consumers frustrated.

The best-case scenario has automakers matching the story of IBM, which has successfully adapted its culture to changes in the technology industry and remains a blue-chip stock. —Paresh Dave