Darkness in Washington (All along the hedges)

The future is unclear 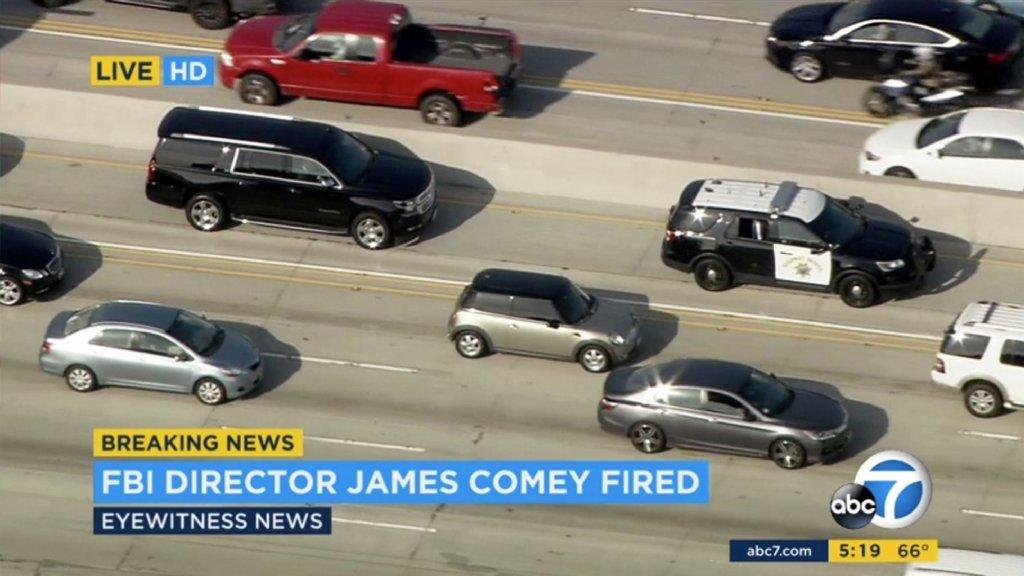 For weeks, President Trump has purportedly been angry with FBI Director James Comey. Comey has been leading a probe into whether the Trump campaign colluded with Russia to influence the 2016 presidential election. As questions loom, the country awaits answers.

Trump has tried for weeks to divert attention from the investigation — a prickly thorn in his infant presidency. He tweets unsubstantiated claims that President Obama spied on his campaign, calls established news organizations “fake news” and continues to allege that voter fraud plagued the election he won.

Trump, a heavy watcher of TV news, has been reported to sometimes scream at the television during segments about the Russia investigation.

THE OVAL OFFICE, MONDAY, MAY 8 — THE DAY BEFORE COMEY IS FIRED — DAY

Become a Los Angeles Times subscriber today to support journalism like this. Start getting full access to our signature journalism for just 99 cents for the first four weeks.

Comey addresses a group of FBI agents. He is scheduled to speak at a diversity hiring event later in Hollywood.

The FBI director is ‘caught flat-footed’ and initially thinks the report is an elaborate prank.

(scurries and hurriedly escorts the now former FBI director from the room.)

A black car pulls up in front of FBI headquarters. A tall man, identified as Trump’s longtime security guard Keith Schiller, holds a manila envelope and enters the building. Disappearing from view, he returns to the car moments later, the envelope missing. The car pulls away and drives down Pennsylvania Avenue as news spreads of Comey’s fate.

(Reading from Rosenstein’s memo to Trump)

As you and I have discussed, however, I cannot defend the Director’s handling of the conclusion of the investigation of Secretary Clinton’s emails, and I do not understand his refusal to accept the nearly universal judgment that he was mistaken. Almost everyone agrees that the Director made serious mistakes; it is one of the few issues that unites people of diverse perspectives.

(Reading from Trump’s letter of dismissal to Comey)

While I greatly appreciate you informing me, on three separate occasions, that I am not under investigation, I nevertheless concur with the judgment of the Department of Justice that you are not able to effectively lead the Bureau.

ACT II: Darkness in Washington (All along the hedges) 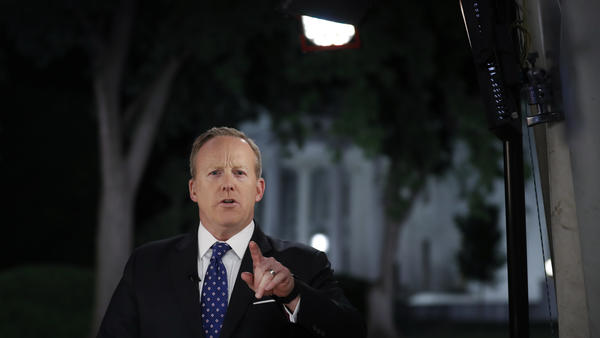 A GAGGLE OF REPORTERS WAITS OUTSIDE THE WHITE HOUSE — NIGHT

Night has fallen in Washington. Reporters await word from White House officials. Press Secretary Sean Spicer must pass the group to leave the grounds. Hoping to depart without being seen, he hides among the bushes. (Note: He is not in the bushes.)

Suddenly, Spicer changes his mind and decides to take questions… But has one condition:

Did the president speak with Deputy Attorney General Rod Rosenstein about Rosenstein’s review of Comey?

That’s something you should ask the Department of Justice.

Sarah, you’re right there, you don’t have to yell.

After 10 minutes, Spicer shuts down questioning and leaves.

DISSOLVE AS CAMERA PANS UP ALONG THE 10-FOOT-HIGH HEDGES.

A television split-screen shows Cooper on the left, interviewing Trump advisor Conway on the right.

Joining us right now is the White House counselor to the president Kellyanne Conway.

It’s the first time Conway has been on television in several weeks.

Kellyanne, you know, to those who say why now, why fire James Comey now, what do you say?

(Cooper and Conway spend about 15 minutes discussing why Trump decided to fire Comey. The exchange is fast-paced and tense.)

So now your White House is saying that what he did was wrong, but previously as a candidate, Donald Trump was saying it was the right thing?

You’re conflating two things that don’t belong together. Thanks for the trip down memory lane.

So that was fun. But here’s what happened today. Today, not in a campaign, in the White House, the president of the United States –

So that person doesn’t exist anymore? Candidate Donald Trump, that’s a fictional character we are no longer allowed to refer to? We can now only refer to the Donald Trump who exists today?

Anderson, I’ll ignore how unkind that is. And I will say that as president of the United States he needs confidence in his FBI director and he doesn’t have it. And the attorney …

When was the moment he lost confidence?

… general and the deputy attorney general didn’t have it. Well, read this letter. Read these letters. It’s a kind — it’s just — it’s a confluence of events. What Mr. Rosenstein says is so important. 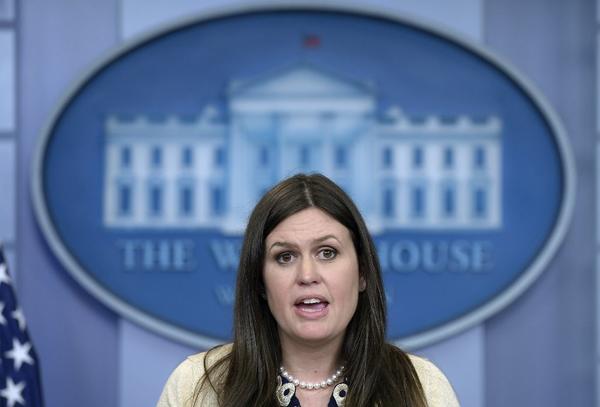 Deputy Press Secretary Sarah Huckabee Sanders walks to the podium. The room is full of reporters. Before taking questions, she makes a statement.

(over the cacophony of camera shutters)

And most importantly, the rank-and-file had lost confidence in their director.

In addition to all of the big news happening at the White House today, it is also my daughter Scarlet’s fifth birthday. … I think her first birthday wish would probably be that you guys are incredibly nice. (Laughter.) And now I will take your questions.

Who did the president consult before making the final decision to fire James Comey?

The president spoke with a number of individuals, but at the end of the day it was the president’s decision.

Was he surprised by the Democratic backlash? Did he anticipate it, considering some of the past statements?

If Hillary Clinton had won the election, which thank God she didn’t, but if she had and she had been in the same position, she would have fired Comey immediately. And the very Democrats that are criticizing the president today would be dancing in the streets celebrating. So it’s just the — I think the purest form of hypocrisy.

Was the president aware that James Comey asked for more resources in the Russia investigation? And did that factor into his decision to get rid of Mr. Comey, the director?

Not that I’m aware of, and I think that would be a better question for the Department of Justice.

ACT IV: Something is amiss 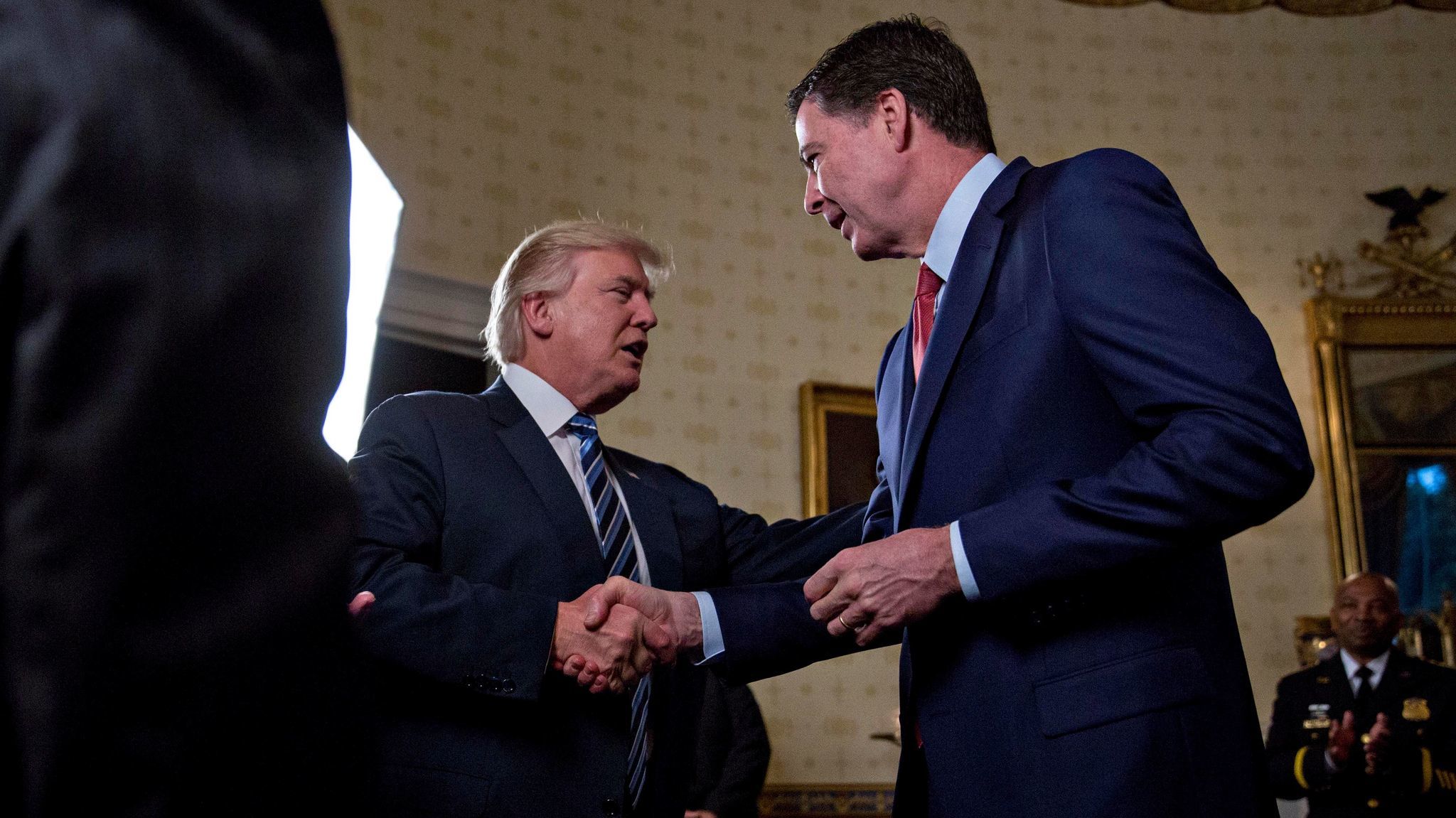 Andrew McCabe was named Comey’s second-in-command last January. Now he sits before a Senate panel, answering questions about the ouster of his former boss.

Is it accurate that the rank-and-file no longer supported Comey?

No sir, that is not accurate. … I hold Director Comey in the absolute highest regard. I have the highest respect for his considerable abilities and his integrity, and it has been the greatest privilege and honor of my professional life to work with him. I can tell you also that Director Comey enjoyed broad support within the FBI.

NBC’s Lester Holt and Trump sit across from each other at the White House. This interview is the first time Trump has spoken out about Comey’s firing. His only direct comments until now have been tweets.

Look, he’s a showboat, he’s grandstander, the FBI has been in turmoil. You know that, I know that. Everybody knows that. You take a look at the FBI a year ago, it was in virtual turmoil, less than a year ago. It hasn’t recovered from that.

Holt had already pressed Trump about the basis for his decision, which Trump’s White House had tied to Justice Department officials.

I was going to fire regardless of recommendation. … And in fact when I decided to just do it, I said to myself, I said, you know, this Russia thing with Trump and Russia is a made-up story. It’s an excuse by the Democrats for having lost an election they should have won.

Are you angry with Mr. Comey because of his Russia investigation?

I just want somebody that’s competent.

(persisting in his line of questioning)

You were the centerpiece of the Trump campaign.

So, is he (Comey) being truthful when he said that you weren’t under investigation?

ACT V: The future is unclear 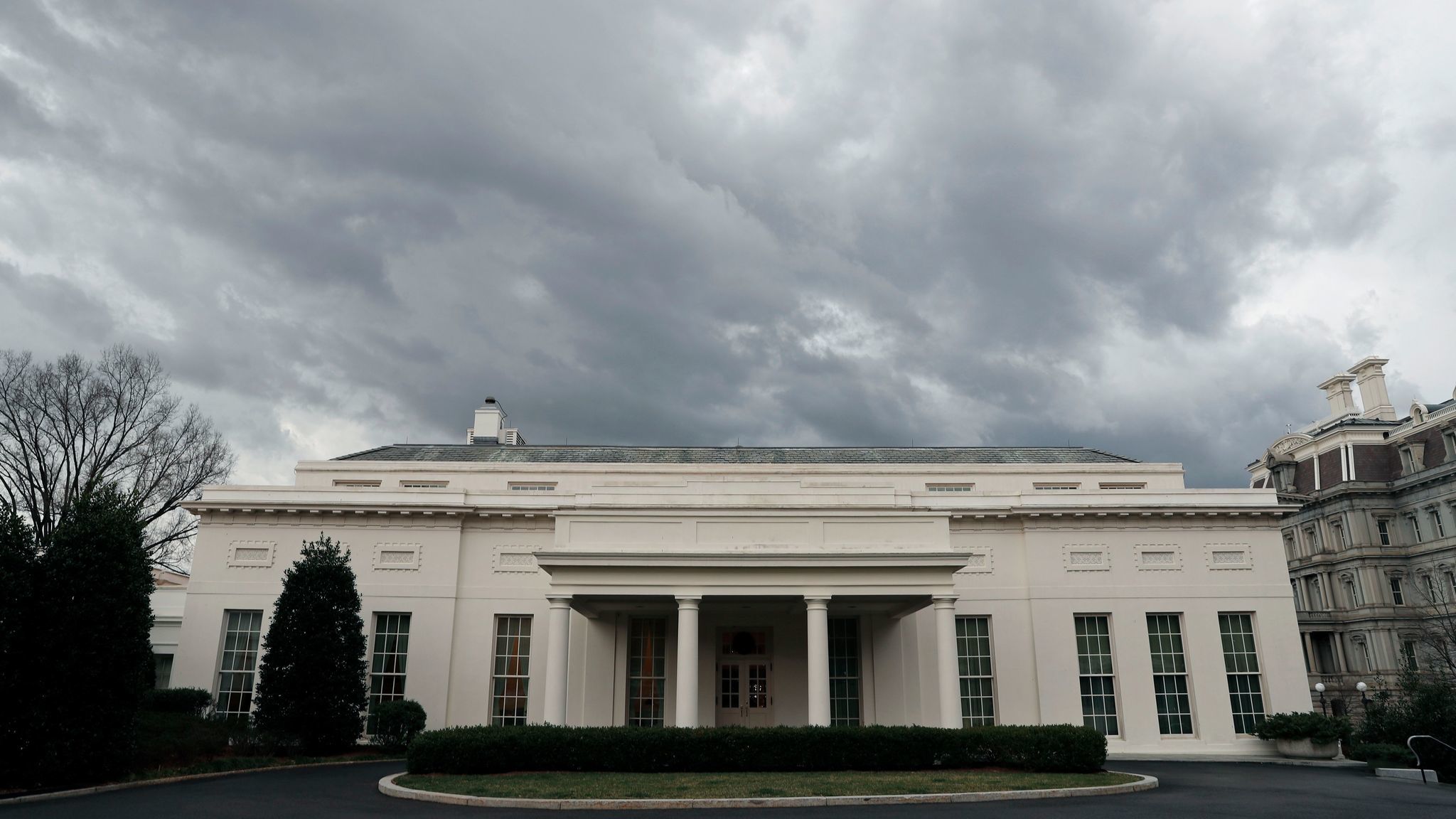 Investigative reporter Peter Elkind requests an interview with Comey for the New Yorker.

(responding via his secret email)

You are right there is a clear story to tell — one that folks willing to actually listen will readily grasp — but I’m not ready to tell it just yet for a variety of reasons.

Become a Los Angeles Times subscriber today to support journalism like this. Start getting full access to our signature journalism for just 99 cents for the first four weeks.