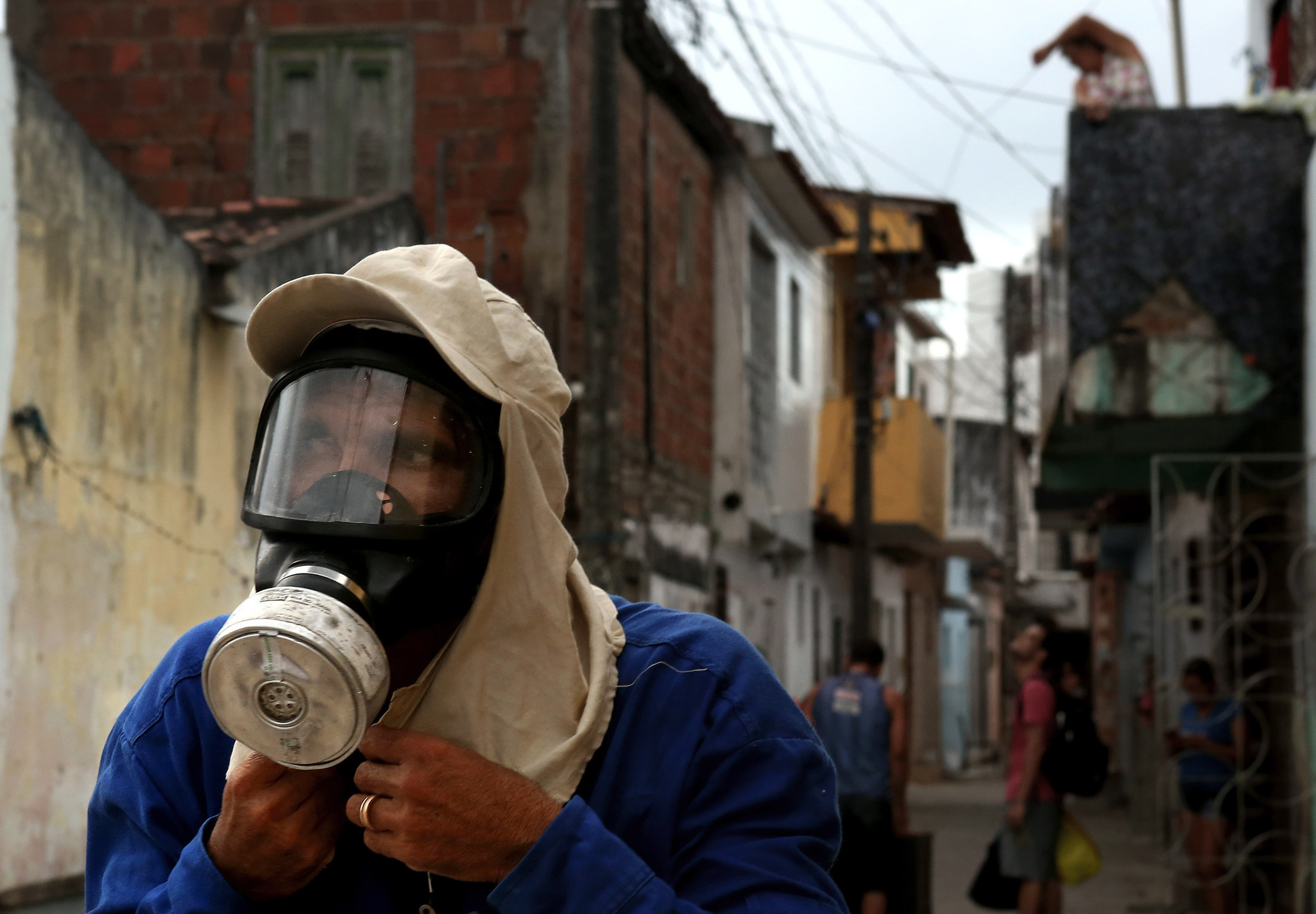 The temperature was already soaring when mosquito control agents fanned out one morning amid a maze of crumbling brick homes on the edge of this lakeside city. Garbage clogged a drainage canal. Makeshift sewers lined the dirt streets.

It was, in short, ideal habitat for the mosquito that spreads the Zika virus.

Behind one house, an agent found water being stored in a broken washing machine. She drew a sample into a pipette and held it up to the sun. It was full of writhing mosquito larvae.

All around were places where water could pool and the enemy could lay its eggs: old cinderblocks, the dog’s water dish, even a discarded bottle cap.

Everything would have to be drained or treated with larvicide, they told the family living there.

With no vaccine or treatment for Zika, Brazil’s government has few options besides sending teams to every infested region to hunt down and kill the insects that carry the virus, Aedes aegypti.

Can the mosquito be defeated?

It has been done before in Brazil, and much of Latin America. But that was more than half a century ago.

The battlefield looks very different now, and experts fear that this time it is an unwinnable fight. The epidemic might wane, but as long as the mosquito remains, the virus can strike again.

The agents inspecting the home with the washing machine were especially concerned because an 18-year-old living there was pregnant.

If she were to be infected with Zika, the consequences could be devastating. The virus has already caused more than 1,600 birth defects in Brazilian infants.

The young woman, Carla Andreia de Sousa, asked what symptoms she should watch for. “We see on the news that there are many people getting sick,” she said.

But most people with Zika don’t experience any symptoms. An agent urged her to get an ultrasound, to check that her fetus is developing normally.

Aedes aegypti most likely arrived in Latin America from its native Africa on slave ships in the late 18th century and has been spreading deadly viruses ever since.

Brazil's first assault on the species came early last century in response to recurring epidemics of yellow fever that had claimed tens of thousands of lives, brought commerce to a halt and emptied cities of those who could flee.

Then, as now, Brazil’s government declared war on the species, deploying legions of public health workers to carry out house-to-house searches, spray pesticides and eradicate the pools of standing water where the mosquito breeds.

But the campaign — part of a well-funded, internationally led crusade against the mosquito— was waged in ways that would not be tolerated today.

It was a dictatorial and highly intrusive operation, with fumigators sometimes entering houses by force. The weapon of choice was the infamous pesticide DDT, which was effective against the mosquito but was later found to have toxic effects on wildlife and human health.

In 1958, international health authorities declared Brazil free of Aedes aegypti, and within four years, most of the continent had achieved the same success. But then governments relaxed their efforts.

By the late 1960s, the species was back in northern Brazil, and soon across much of the continent. Today, the virus-toting mosquito is responsible for hundreds of deaths a year in Brazil from dengue and chikungunya.

Experts say the chances of beating the species are even lower now than they were 50 years ago.

For one, demographic shifts have multiplied the kinds of habitat where the mosquito thrives. Cities have exploded in size, and infrastructure development has not kept pace with population growth.

Millions of people lack plumbing and store water in open containers that make ideal breeding sites. Even emptying or covering standing water cannot guarantee extermination of the mosquito. Its eggs can survive dry for months.

To make matters worse, the country is in the midst of its most crippling recession in decades and a political crisis that has seen the president impeached and much of Congress and the new Cabinet mired in allegations of corruption.

At one point last year, the federal government stopped shipping larvicide — a key weapon against mosquitoes -- to some of the places hardest hit by the Zika epidemic.

Rossandra Oliveria, who oversees mosquito abatement in Campina Grande, a city of 400,000, said the shortages lasted for months and became so acute that health workers started experimenting with alternatives such as using household bleach and small fish to kill insect larvae in water storage tanks and drainage canals.

The shipments have since resumed. Still, Oliveria lamented that she does not have the authority, government backing or resources that were available to her predecessors in the 1940s and 1950s.

Even if the country managed to eradicate the mosquito, the risk of its returning is higher than ever, given the movement of people and goods that has come with globalization.

Long accused of neglecting the threat posed by dengue and chikungunya, Brazilian officials are eager to show they are taking Aedes aegypti seriously.

Here in the northeast, the epicenter of the Zika epidemic, health authorities have set up command centers with banks of phones and computers to field queries from a fearful public and dispatch crews to mosquito infestations. Their slogan: “A mosquito is not stronger than an entire country.”

Officials insist the strategy is yielding results, as new Zika infections have fallen significantly in recent months. The health minister recently declared that the risk of visitors contracting the virus during the Olympic Games in Rio de Janeiro was “almost zero.”

Experts note, however, that the decline in Zika cases could partly reflect seasonal changes in the mosquito population, which drops in the colder months of the Southern Hemisphere winter.

Some researchers believe that the epidemic in Brazil may already have peaked and could burn itself out in a few years, as more people build up resistance through exposure to the virus. But as long as there is Aedes aegypti in the country, there is a danger of fresh outbreaks.

Critics complain that many of the government’s tactics against the mosquito — sending soldiers into neighborhoods to hand out leaflets about the virus, for instance — are more show than substance.

Rodrigo Cesar Magalhaes, a historian who has written about Brazil’s mosquito wars, said the government isn’t doing enough to address the poverty and poor sanitation that have long allowed mosquitoes to thrive in the northeast.

Throughout the region’s vast urban slums and arid hinterlands, residents hoard water in rooftop tanks and other uncovered containers in a constant battle against unreliable water supplies. Many do not have access to the sewage system.

“The government wasn’t worried about this 50 years ago, and the government is repeating the same mistake today,” Magalhaes said.

In the hillside neighborhood of Pedregal, one of Campina Grande’s poorest, it is a race to get Alessandra de Sousa Amorim’s four daughters in and out of the bathroom before the faucets run dry. The area is without running water for three days out of the week, and the cut-off times are unpredictable.

There was a loud shriek when one girl was left with a head full of shampoo and no water to rinse it off. The family stores water in a backyard shed for such occasions.

The neighborhood is full of mosquitoes. Homes don’t have screens on the doors or windows, and hardly anybody can afford bug spray.

Last summer, when she was pregnant with her fifth child, she developed a fever, rash and joint pain — telltale symptoms of a Zika infection.

Two months later, she went for an ultrasound. It was her dream to have a son. When the doctor said it was a boy, she screamed with joy.

It took her a moment to realize that the doctor was tearing up.

The fetus had an unusually small head, a condition known as microcephaly that is one of the most visible defects caused by the Zika virus.

When Samuel was born in December, scans showed damage to his brain.

This story was reported with a grant from the United Nations Foundation.