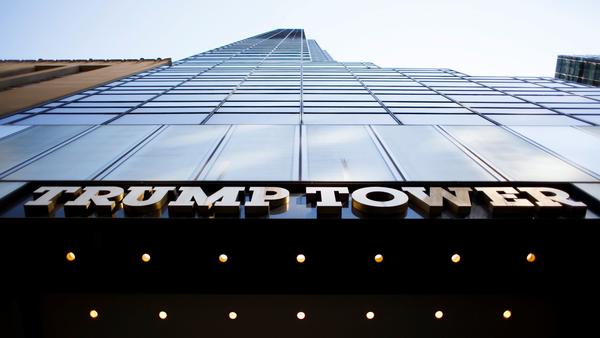 The FBI director and other intelligence officials brief Trump and his national security team on their recent findings about Russia’s efforts to influence the 2016 presidential election.

Comey stays behind to make Trump aware of more sensitive information. A salacious dossier suggests that Russian officials had gathered compromising information about Trump that they would use as blackmail. This leaked dossier gets widespread coverage days after this conversation.

Comey’s statements say that he wanted to “minimize potential embarrassment” to Trump.

At that time, the FBI director assures Trump that he personally is not under investigation.

“During our one-on-one meeting at Trump Tower, based on President-elect Trump’s reaction to the briefing and without him directly asking the question, I offered that assurance.”

Comey leaves the meeting. In an FBI vehicle outside Trump Tower, he begins documenting his private conversation with the president-elect. It is the first in a series of notes he makes following interactions with Trump. Comey says he did not routinely write down accounts of such conversations prior to his meeting Trump.

In this statement, Comey notes that during his time as FBI director under President Obama, he had only two one-on-one meetings, and never by phone. Comey says he spoke with Trump nine times. That morning on Twitter, Trump was consumed by Hillary Clinton’s campaign, the “dishonest media” coverage of the border wall he planned to build and Arnold Schwarzenegger’s ratings on “The Apprentice.”

Trump was clearly frustrated. The night before, NBC had done a story on the intelligence reports that were the subject of his meeting with Comey. He later tweeted that he asked the House and Senate committee chairs to investigate how NBC received the reports before he did.

The dishonest media does not report that any money spent on building the Great Wall (for sake of speed), will be paid back by Mexico later!

I am asking the chairs of the House and Senate committees to investigate top secret intelligence shared with NBC prior to me seeing it. 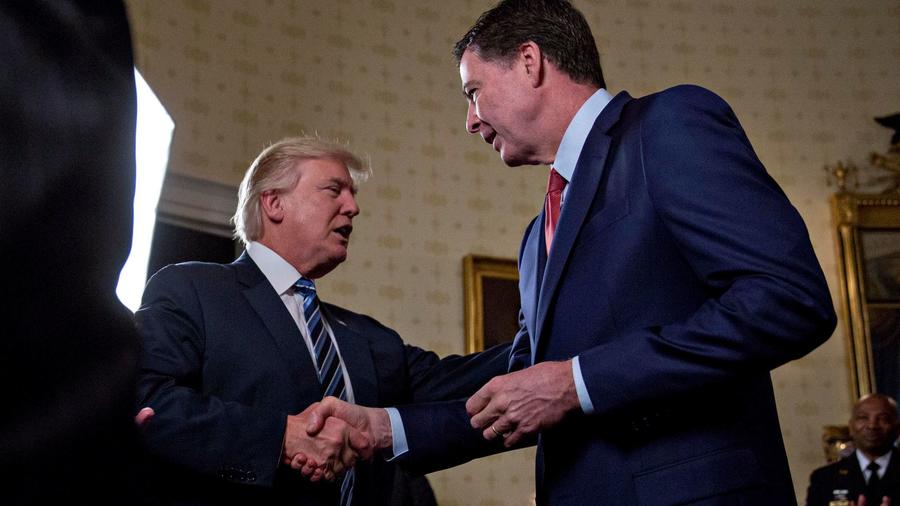 Trump calls Comey around lunchtime to invite him to dinner that evening. Originally, Trump had told Comey he had thought about extending the invitation to his whole family, but decided against it. Comey assumes others will be there, but learns upon arrival that it is a private meal, interrupted only when two Navy stewards enter the room to serve food and drinks.

When Trump asks Comey whether he wanted to remain as FBI director, Comey finds it an odd question “because he had already told me twice in earlier conversations that he hoped I would stay, and I had assured him that I intended to.”

Comey again tells Trump that he intends to serve out his tenure. But the conversation makes him uneasy. He tries to guard his character, and insists that he’s “reliable” – the president can count on him to tell the truth.

“I need loyalty, I expect loyalty,” Trump tells him.

“I didn’t move, speak, or change my facial expression in any way during the awkward silence that followed. We simply looked at each other in silence. The conversation then moved on, but he returned to the subject near the end of our dinner,” Comey writes.

“You will always get honesty from me,” Comey responds.

“You will get that from me,” Comey assures him.

The FBI director would later write that he didn’t know whether he and the president viewed “honest loyalty” in the same light.

Before the dinner ends, Trump revisits their earlier conversation about the dossier.

Trump tells Comey he had considered ordering him to investigate the allegations to prove they were false, but Comey tells the president that is a bad idea because it will create a narrative that the FBI was investigating Trump personally.

The lead-up to that “loyalty dinner” differs slightly in Trump’s account. In an interview with Lester Holt after Comey’s firing, Trump told Holt that it was Comey who wanted to have dinner “because he wanted to stay on.”

And Trump relayed a “we’ll see what happens” message.

“The President also never told Mr. Comey, ‘I need loyalty, I expect loyalty’ in any form or substance,” he writes. Comey meets with Trump for a previously scheduled counter-terrorism briefing.

“I was directly facing the president, sitting between the deputy CIA director and the director of NCTC. There were quite a few others in the room, sitting behind us on couches and chairs,” he writes.

Trump tells Comey he wants to speak with him alone at the end. Both Atty. Gen. Jeff Sessions and Trump’s son-in-law, Jared Kushner, linger behind, before Trump excuses them. Comey elaborates.

In his public testimony less than a week later, Sessions confirms this part of Comey’s story. Similar to Comey’s account, Sessions says Trump asked him to leave the room, leaving the presidetn and his FBI director alone in the Oval Office.

When the two men leave by way of the door next to the grandfather clock that has stood in the Oval Office since the year after Richard Nixon’s resignation, Trump begins.

“I want to talk about Mike Flynn.”

Flynn had been fired the day before.

Trump tells Comey that Flynn did nothing wrong in speaking to the Russians, and that the reason he was fired was because he had misled Vice President Mike Pence.

Trump then jumps to the subject of leaks and the importance of keeping classified information classified. Comey and Trump are briefly interrupted when White House Chief of Staff Reince Priebus pops his head in the door. Trump dismisses him and returns to the topic of Flynn.

“He is a good guy,” Comey responds.

Comey confides his concern to his advisors. He later tells Atty. Gen. Jeff Sessions that he no longer wanted any direct communication with the president.

“The President never, in form or substance, directed or suggested that Mr. Comey stop investigating anyone, including suggesting that Mr. Comey ‘let Flynn go.’ As he publicly stated the next day, he did say to Mr. Comey, ‘General Flynn is a good guy, he has been through a lot’ and and also ‘asked how General Flynn is doing.’

In the early-morning hours, Trump returns to an ongoing narrative of media leaks.

“The real story here is why are there so many illegal leaks coming out of Washington, ” he tweeted.

The real story here is why are there so many illegal leaks coming out of Washington? Will these leaks be happening as I deal on N.Korea etc?

The following day, Trump calls the Russia story “nonsense” and an attempt to distract from the investigation into Hillary Clinton’s emails.

This Russian connection non-sense is merely an attempt to cover-up the many mistakes made in Hillary Clinton's losing campaign. 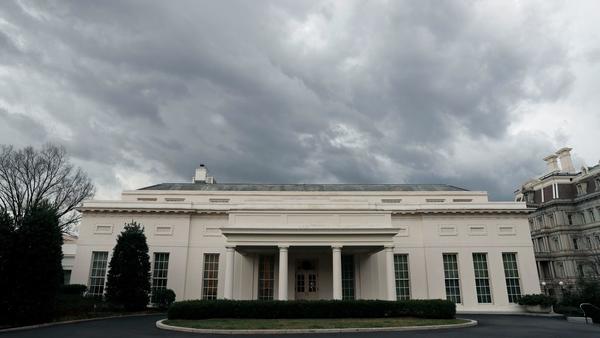 During a House Intelligence Committee hearing 10 days before, Comey confirms that the FBI is investigating Russia’s possible coordination with the Trump campaign.

That investigation continues to irritate Trump.

Trump calls Comey and asks what could be done to “lift the cloud” of Russia.

“He said he had nothing to do with Russia, had not been involved with hookers in Russia, and had always assumed he was being recorded when in Russia,” Comey writes.

Comey reminds Trump that he is not under investigation, and has told congressional leaders the same, to which Trump presses that “we need to get that fact out.” Comey does not tell Trump that the FBI’s hesitance for doing so is in case that fact changes.

“I told him I would see what we could do, and that we would do our investigative work well and as quickly as we could,” he writes.

That morning, Trump once again tweets his frustration about the “failing media.”

House Intelligence Committee Chairman Devin Nunes one week before said that U.S. intelligence officials had picked up communications of the Trump transition team. Now, news spread that the information was coming from inside Trump’s White House.

“If this is true, does not get much bigger,” he tweeted.

..not associated with Russia. Trump team spied on before he was nominated." If this is true, does not get much bigger. Would be sad for U.S. 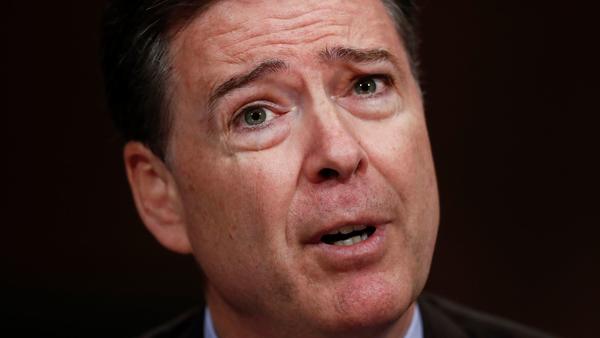 Trump calls Comey to ask him what he’d done to spread the word that he wasn’t involved in the Russia investigation. “The cloud,” as Trump calls it, was preventing him from doing his job.

Comey tells Trump that the White House counsel should contact the Justice Department. Trump agrees to do so.

“Because I have been very loyal to you, very loyal; we had that thing, you know,” he tells Comey.

“I did not reply or ask him what he meant by ‘that thing,’” Comey writes.

This was the last time Comey spoke with Trump. Less than a month later, Trump fired him.

Tensions had been high when news broke that the FBI was monitoring communications of Trump campaign advisor Carter Page. The U.S. believed he was acting as a Russian agent. It was the latest story to fuel reports about the Russia investigation. Trump had made it repeatedly clear that he believes the investigation, and the attention to it, is a distraction.

Three days after Trump fired Comey, the president insinuated that he had tangible evidence to dispel Comey’s claims about their private conversations.

James Comey better hope that there are no "tapes" of our conversations before he starts leaking to the press!