Judy London merges onto the freeway, heading northeast toward a high desert already baking under a recently risen sun. From West Los Angeles she faces a two-hour, 100-mile drive to the Adelanto Detention Facility to meet a client who is being deported. The commute time can double if rush-hour traffic is particularly bad.

London arrives at the facility and walks up a concrete path flanked by gravel to the detention facility's entrance. Once inside, rows of chairs and lockers greet her, as does a desk manned by a guard. She checks in but can’t meet her client yet – the facility is undergoing its daily head count and she has to wait until it’s finished.

It can take another hour from this moment. London still has to be cleared through security and have a guard escort her client. 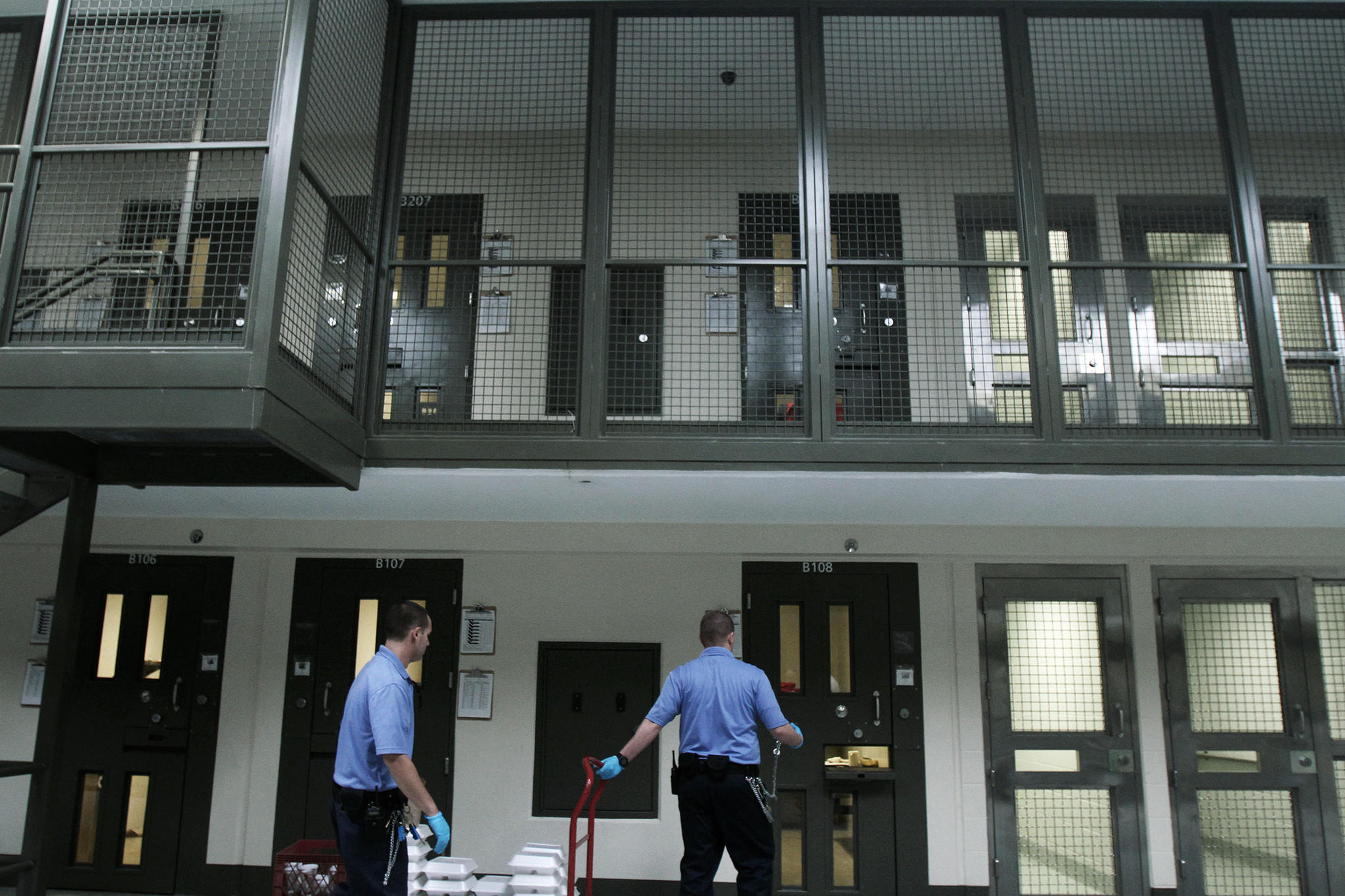 Cells at the Adelanto Detention Facility, about 86 miles north of downtown Los Angeles. It is one of the largest ICE facilities in the nation. (Los Angeles Times)

Finally, she has to wait for an interview room. Adelanto Detention Facility has an average daily population of 1,785 but only a handful of rooms designated for lawyer-client meetings. And once a room is available, she’ll have to take all her notes by hand. The facility prohibits the use of phones, laptops and other electronic devices.

London, like many immigration attorneys, spends a lot of time just trying to meet face-to-face with her clients. It’s a good day when she actually meets them. On bad days, she can spend hours traveling, only to be turned away. The facility has refused entrance to attorneys this summer for a variety of reasons, including a chickenpox outbreak and hunger strikes.

“Generally, it is far easier for me, as an attorney, to walk into a high-security local or federal prison unannounced to visit a client than it is to get into a detention facility to see someone. And that is odd,” said London, directing attorney for Public Counsel's Immigrants' Rights Project.

Miles away from legal aid

Most immigrants detained by ICE during their deportation case don't have an attorney representing them.

Immigration detention is considered civil detention and, as a result, detainees do not have a right to counsel as they would in criminal cases.

Immigration attorneys say geography is a significant hurdle for them and their clients.

Many ICE facilities in the U.S. are located in smaller cities, hours away from larger cities where the most legal aid organizations operate. As a result, even the legal aid resources the government provides for the detained can be many miles away. For some of the largest immigration detention centers, the nearest government-listed pro bono legal aid group is located hours away, according to a Times analysis.

The farthest is Etowah County Detention Center in Gadsden, Ala. Alabama doesn’t have an immigration court, so immigrants detained there are referred to the Loyola Law Clinic — 408 miles away in New Orleans.

Distances were measured by mapping the shortest driving distance between each facility and the closest government-listed legal aid. The pro bono list is provided by the Justice Department’s Executive Office for Immigration Review. Legal aid groups that do not work with detained clients or clients with criminal records were excluded. Only facilities with an average daily population of at least 100 detainees May 2016 to April 2017 were included.

Providers on the pro bono list – mostly nonprofits – aren't required to offer free services to every detainee, according to the Justice Department. Detained immigrants are allowed to seek an immigration attorney outside the list, if they can afford it.

But for those who can’t pay, the list may be their only option. Still, only a lucky few get help from pro bono lawyers.

UCLA law professor Ingrid Eagly analyzed 1.2 million deportation cases between 2007 and 2012 to address the lack of access to counsel. She found just 2% of detainee cases had free representation. Most immigrant attorneys came from solo practitioners or small firms.

Faraway detention facilities can pose a logistical challenge to the court system as well. Court procedure can vary by jurisdiction. Some have judges at the facility. Some conduct business by teleconference. Some use a combination of the two.

At Etowah, it's neither. Detainees there have already been ordered deported and are sent there while waiting for their final deportation date, according to area attorneys. The few still seeking legal counsel hope a last-ditch appeal will halt the deportation process.

A losing game for detained immigrants

ICE may also detain those it deems to be a flight risk or danger to the community, which does not require a prior criminal conviction. In fact, civil violations have been a recent focus of enforcement.

The overwhelming majority of removal cases since May 2016 involved Immigration and Customs Enforcement officials citing people for immigration violations rather than for criminal activity, according to TRAC, a nonpartisan, nonprofit data research center at Syracuse University.

Regardless of the reason for the detention, once housed at an ICE facility, immigrants under deportation orders are significantly less likely to find a lawyer compared with those who aren't detained.

An analysis found that 37% of all immigrants facing deportation, whether detained or not, had an attorney, according to research by UCLA's Eagly. When looking only at detained immigrants, only 14% secured counsel.

The percentages are even lower for those held in a small city or rural area.

Distance isn’t the only reason access to counsel is so low for detained immigrants. Some cases require interpreters and testimony from medical experts, who all require prior ICE security clearance.

Some facilities have no accommodations for medical examinations or will often refuse entry to physicians or psychologists, London said. This means that an attorney may have to fight a separate legal battle just to have an expert evaluate a client.

Cases are also concluded more quickly for those placed in detention centers, statistics show. While those not detained may have their cases tied up in immigration court for years, those who are detained may face judgment within 30 days.

In the most extreme scenarios, an immigration judge can rule on a deportation in as little as 24 hours, virtually ensuring that detained immigrants won’t have time to engage an attorney.

This was the case in Tucson, Eagly's analysis found. Nearly all of its detainee cases between 2007 and 2012 were decided within a day. This resulted in a representation rate of 0.002%, the lowest among any immigration court.

ICE did not answer specific questions about why detained immigrants are significantly less likely to obtain counsel or if systemic hurdles limit access to legal representation.

ICE has previously said that it is “very supportive and very accommodating” to detainees who wish to have a lawyer. ICE spokeswoman Jennifer D. Elzea said the department maintains that position.

No attorney or legal aid group interviewed for this report agreed with ICE's position.

“The government is locking people up in remote jails and prisons hundreds of miles from attorneys, and arguing that having phones there that sometimes work is sufficient access to counsel,” National Immigrant Jusice Center executive director Mary Meg McCarthy said in response to ICE's statement.

“The government spends billions of dollars to sustain – and expand – a system that obstructs lawyers’ ability to defend their clients’ due process rights. We’ve been told by ICE that the agency does not consider availability or proximity of counsel as any part of its assessment of the suitability of a new detention center, and we have no reason to believe that it cares at all whether people in detention have lawyers,” she said.

An uncertain outlook for reform

The administration's executive orders on immigration have reversed enforcement priorities. Arrests increased by 37.6% during Trump's first 100 days in office compared to the same period in 2016, according to ICE data.

Instead, the fight for reform will take place in more liberal cities and states, and among legal aid groups.

The Southern Poverty Law Center recently launched the Southeast Immigrant Freedom Initiative. The goal is to provide counsel to every detained immigrant in the Southeast – a region with a high number of deportation cases.

But the program, director of the initiative Dan Werner said, was a stopgap initiative built out of necessity. “Relying on volunteer attorneys as a long-term solution is not a solution at all,” he said.

“The real solution is systemic reform of immigration policy.”

In March, New York became the first state to dedicate funding in an effort to provide pro bono legal services to every detained immigrant.

And in June, California lawmakers put $45 million in the state budget to expand legal services for immigrants. That figure includes a $12-million legal defense program for those facing deportation who do not have a violent felony record.

Despite these legal reforms, attorneys and advocates view it as incremental in the long run.

The system is designed with the assumption that there will be no counsel, London said. Her sentiment is shared with many in the field who wish to see improvements in access to counsel, or better yet, a system-wide change of the immigration system.

“In most cases there won't be accountability in the government, so there's no incentive for them to address it.”