Inspired by stained glass, Burbank resident Jennifer Turnbull’s mural “Good Morning, Burbank” depicts a sunrise over the Verdugo Mountains, in shades of green and yellow, with crepuscular rays lighting up the pink and red clouds in a pale blue sky.

The painting, which graces a pad-mounted electric equipment box on a small island of land where South Beachwood Drive intersects with West Olive Avenue and West Verdugo Avenue, is one of six new art pieces that have added color to otherwise drab utility fixtures in Burbank.

Seven artists were recruited recently to paint unique murals on the boxes throughout the city as part of a pilot beautification project under the city’s Cultural Arts Commission. Turnbull, who teaches art at a public high school in Palmdale, was the only artist from Burbank selected. She said she was eager for the opportunity to contribute her work. 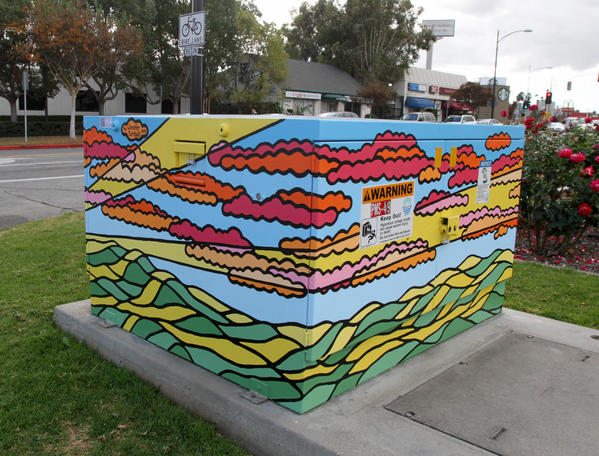 “I think public art is so important. I think it’s the highest form [because] it’s for everyone,” Turnbull said, adding that it’s also free to view.

The project’s theme was “Just Imagine,” and it was designed to bring visual art out of museums and galleries for the public’s enjoyment.

Valley Village-based artist Alexandra Kube painted the utility box near the parking lot at Robert R. Ovrom Park in a Cubist style to raise appreciation of the artistic movement that Pablo Picasso pioneered.

The five other murals are located at the following locations: near the Verdugo Park Recreation Center, by the parking lot off Clark Avenue at George Izay Park, between the Burbank City Hall building and parking lot, at Bel Aire Park and near the tennis courts at Brace Canyon Park.

See them all on the map below:

“The results, as you see, turned out amazing,” Altman told the audience at a recent Burbank Coordinating Council meeting.

Kube said during one of the five full days she spent working on the mural, titled “Taking Flight,” she overheard a little girl tell her mother she wished she could do something like that, which Kube said was “heartwarming.” She said she hopes the mural near the Ovrom Community Center will inspire other future artists. 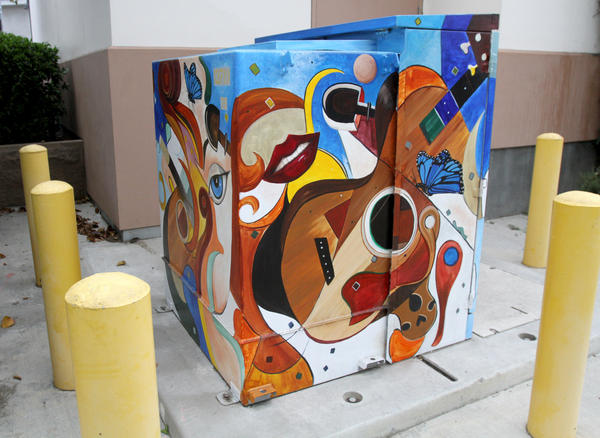 Officials in several Southern California cities, including Glendale, San Luis Obispo and La Quinta, have adopted similar programs to beautify their utility boxes, which are often drab gray and on public property, such as on street corners and in public parks.

Kube, who is a fine-arts painter but has also worked in animation, said she first saw the painted boxes in Glendale and thought, “That is so cool.” She said she’s also hoping to do a mural in North Hollywood’s Arts District, which has launched a program of its own.

Details about Burbank’s program, the selection committee and the artists, as well as the NoHo Arts District program are available at streetboxart.com.

The murals were paid for through sponsorships from local organizations. Dunn-Edwards Paints provided $500 gift cards for the artists to purchase supplies. Each muralist also received a $1,000 stipend, which in Turnbull’s case was paid for by the Burbank Fine Arts Federation. She said she’d have done it for free, though.

Turnbull said she spent 87 hours painting the mural and estimates the total project took 150 hours, including her preliminary design work. Artists also agreed to do touch-ups over the course of the three-year pilot program.

Altman said that the program, if successful, could be expanded to include projects to paint murals on blank walls throughout city or in parking garages.

Chad Garland covered the city of Burbank and Bob Hope Airport for the Burbank Leader until 2016. Previously, he has covered Arizona’s congressional delegation in Washington, D.C., for Cronkite News Service and Oregon’s Legislature for the Associated Press. His work investigating questionable veterans’ charities as part of the award-winning News21 national investigative project “Back Home” earned a “Best in Business” award from the Society of American Business Editors and Writers in 2013. Before becoming a reporter, he spent more than a decade in various assignments related to national defense. An Illinois native, his first California address was at Marine Corps boot camp in San Diego. He has degrees from the University of Illinois at Urbana-Champaign and Arizona State University, as well as a diploma from the Army’s Defense Language Institute in Monterey, where he learned to speak Russian.