“The Department’s guiding value when using force shall be reverence for human life.”

The videos in this story capture some profanity, blood and violence. Click or tap on a video to unmute or mute audio.

Since the May 25 death of George Floyd at the hands of a Minneapolis police officer, Angelenos have turned out to protest many facets of modern policing, including the use of excessive force against the public. Witnesses have flooded social media with videos showing police responding aggressively in turn to the large and sometimes volatile protests.

A Times review of social media videos from the first days of the protests found Los Angeles Police Department officers using extreme and at times violent measures against protesters, seemingly without following department protocols around the implementation and escalation of force — which themselves offer little by way of guidance.

An LAPD SUV drives into crowd of protesters in Pershing Square. (Video by Sophia Lee)

During protests, LAPD is authorized to use sponge and foam bullets, batons and other projectiles if officers deem circumstances an imminent threat to themselves or to the public. What poses a threat, however, is largely up to the discretion of officers. Here are the major tactics officers used based off of our review of social media videos. The LAPD declined to comment on the incidents shown below.

Officers are required by protocol to verbally ask crowds to disperse before using force if the situation allows them to.

Videos from the last two weeks have emerged showing that, without even touching members of the public, LAPD has engaged in unusual tactics that intimidate crowds such as stopping them from dispersing, and in at least one instance, driving a police car into a crowded location.

“The intent of a dispersal order is to permanently disperse a crowd, not to relocate the problem to another location. Supervisors should make a reasonable assessment to determine if the members of the crowd are attempting to comply with the dispersal order.” LAPD directive

A line of LAPD officers contain a group of protesters asking to leave. (Video by Matt Hamilton / Los Angeles Times)
With their hands up, protesters chant, "Let us leave." (Video by Abraham Guzman)
Officers chase and take down man. (Video by Gadi Schwartz / NBC News)

Police officers use different kinds of launchers for sponge and foam bullets and other projectiles, such as foam marking rounds and beanbags, which are considered less lethal than regular munitions.

But video accounts show that these weapons, especially when used at short range, can do real damage.

“Less-Lethal force options shall not be used for a suspect or subject who is passively resisting or merely failing to comply with commands. Verbal threats of violence or mere non-compliance do not alone justify the use of Less-Lethal force.” LAPD directive

As such, LAPD protocol directs officers to use these launchers only when immediate action is necessary. Officers are not allowed to use weapons in response to verbal threats or “mere noncompliance.”

Officers' primary target is the navel area or belt line, according to policy. They are not allowed to target the head, neck, spine, chest, groin or kidneys, nor can they shoot at people running away.

Man in hospital after being shot in the head with a less-lethal projectile by police. (Video by @LowkeySinistra)

“Firearms shall not be discharged from a moving vehicle, except in exigent circumstances and in the immediate defense of life.” LAPD directive

During the protests, some officers used batons and tasers to control protesters in ways that appear to violate their policies.

In order to use batons and tasers, officers have to undergo training. Use-of-force directives say that use-of-force is up to the judgment of a "reasonable officer" on the scene. At the same time, they also state, "the test of reasonableness is not capable of precise definition or mechanical application."

“The baton may be used to push individuals who do not respond to verbal commands and encroach upon officers on a skirmish line or who intentionally delay departure while officers attempt to disperse the crowd, whether or not a lawful dispersal order has been issued.” LAPD directive

Officers in Hollywood pile on top of a woman, while the buzz of a taser is heard. (Video by Nicholas Flickinger)

This week, LAPD has said it is investigating 56 allegations of misconduct by officers at protests, 28 involving use of force. An LAPD spokesperson declined to comment on those incidents.

The department has assigned 40 investigators to look into the complaints and "hold every officer accountable for their actions." So far, seven police department employees have been taken out of the field as a result of the investigations.

The Times has reviewed videos from May 29 to June 2 found on social media platforms. Documents from the LAPD were received through records requests. Clips in the opening video are credited to Times staff writer Matt Hamilton, Sophia Lee, Gadi Schwartz of NBC News, Eli Waimberg, @ricci_sergienko on Instagram and Times staff writer Aida Ylanan. 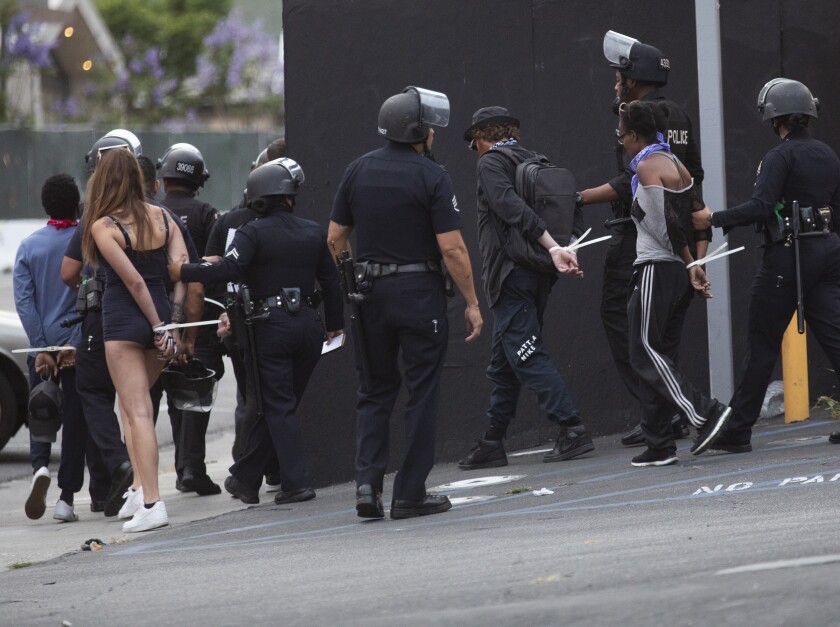 LAPD’s use of batons, other weapons appears to violate rules, significantly injuring protesters 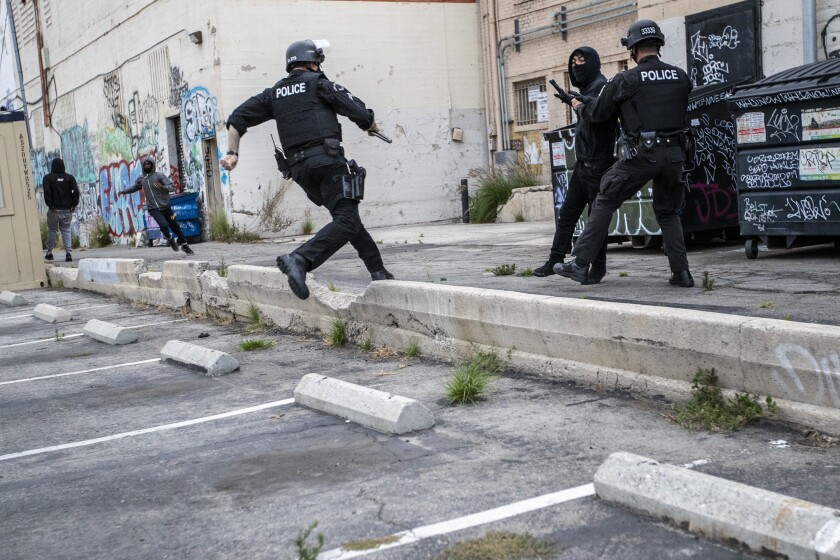 LAPD investigating 56 allegations of misconduct by officers during protests; 7 taken out of the field