The first call came across the Las Vegas radio channel in a burst of static.

“We got shots fired,” the police officer said, in a breathless voice. “Sounded like an automatic firearm.”

The Las Vegas Metropolitan Police Department’s scanner traffic, and body camera video released Tuesday, captured officers’ frantic efforts to find and stop the gunman firing into a crowd of 22,000 people from a perch high above the fairgrounds at a music festival.

From the first reports of gunshots at 10:08 p.m. Sunday, it would be 72 chaotic minutes until a SWAT team crept down a carpeted hallway on the 32nd floor of the Mandalay Bay hotel and blew open the hotel room occupied by suspected gunman Stephen Paddock.

By then, the gunfire had long since ceased and Paddock was dead.

Although 72 minutes sounds like an eternity during an active shooting, officials and experts on Tuesday insisted that the delay before entering the gunman’s hotel room did not suggest a slow response.

“I want to make it clear, again, that while there was that slight delay, the suspect was no longer firing into the crowd,” Clark County Undersheriff Kevin McMahill said at a news briefing late Tuesday.

President Trump tweeted: “It is a ‘miracle’ how fast the Las Vegas Metropolitan Police were able to find the demented shooter and stop him from even more killing!”

Body camera video showed officers ducking behind a cinder-block wall, looking for the source of the gunfire. It was coming from somewhere high up, first responders said, but they weren’t sure where. Mandalay Bay? An entrance gate? The Luxor?

“I need eyes,” one man said on his radio. “Somebody, can you tell me where it’s coming from?”

That initial confusion is common during mass shootings, said James Allen Fox, a Northeastern University criminologist. Locating a gunman is even more challenging when he is perched above the ground, in a building covered in blinding gold windows.

“He was camouflaged,” Fox said. “It would be hard to find him at such a high profile.” 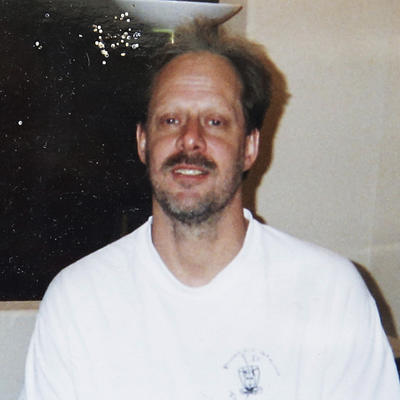 But within minutes, officers had zeroed in on the source of the gunshots.

“We’re seeing multiple flashes in the middle of Mandalay Bay on the north side,” one officer said at 10:13 p.m. over the sound of gunfire. “It’s one of the middle floors.”

A minute later, a police officer who had darted into Mandalay Bay had already reached the floor below Paddock’s room.

Breathing heavily, he whispered into his radio: “I’m inside the Mandalay Bay on the 31st floor. I can hear the automatic fire coming from one floor ahead.”

Paddock, using rifles that had been modified to allow multiple shots per second, continued to shoot.

Thirty-two stories below, concertgoers lay inert on the artificial grass. First responders, panic clear in their voices, reported victims bleeding from their mouths, chests and thighs.

One officer found himself pinned against a wall at the edge of the fairground, huddled next to more than 40 people.

Moments later, the extent of the attack began to sink in. Bodies lay scattered among discarded bottles and hats. Friends knelt in the grass, administering CPR as bullets whizzed around them.

At the medical tent, volunteers tended to injures with few supplies. “We’re making tourniquets out of blankets, but I’m running out of blankets here,” one officer said into the radio.

As reports of injuries came in thick and fast, a dispatcher broke in: “Hey officers, please stay calm. Just relax. We’re trying to get this set up. Just stay calm.”

When the gunfire showed no sign of letting up, a veteran officer cut through the reports of the wounded with a harsh reminder.

“Hey, we can’t worry about victims,” he said. “We need to stop the shooter before we have more victims. Anybody have eyes on the shooter?”

“ It is very tough to step over a body or wounded person, but the shooter has to have priority ” — Charles “Sid” Heal

It’s a difficult message, but a shooter can kill victims faster than medics and police can save them, said Charles “Sid” Heal, a retired Los Angeles County Sheriff’s Department commander who reviewed the Las Vegas audio.

“It is very tough to step over a body or wounded person, but the shooter has to have priority,” Heal said.

The gunman’s position made killing him from the ground almost impossible, experts say, and an attack launched by air too dangerous.

Instead, police officers who had been working another event at the Mandalay Bay began searching the hotel floor by floor, accompanied by hotel security guards and the tempo of gunfire.

They knew they needed to move quickly to find the gunman, or the shooting could continue for hours.

Mass shootings in Orlando, Fla., and Columbine, Colo., have shown “that even a small police response will stop the suspect’s actions,” Clark County Sheriff Joe Lombardo said Tuesday. “Officers on their own, without direction from a supervisor, knew what they had to do.”

Tips from hotel guests and the officers’ observations soon narrowed the field. Police and guards fanned out to sweep the 29th, 30th, 31st and 32nd floors.

At the time, officers feared there were at least two armed suspects in the hotel, and maybe more.

“It is not unusual in these situations for officers to see the potential for multiple suspects with multiple vehicles,” said John Incontro, the former Los Angeles Police Department SWAT captain and the police chief in San Marino. 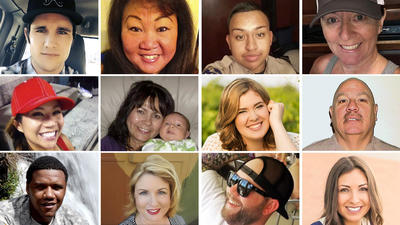 Portraits of the victims: Who they were

U.S. Army veteran Chris Bethel heard the crack of gunfire echo through the hotel from his room on the 30th floor. He could tell that the shots were coming from nearby and that the shooter was changing weapons and changing calibers.

He called 911 and the hotel front desk, to no response, then tried the police again, telling them to try the 32nd floor, he told CBS-DFW.

Moments before police arrived at Paddock’s room, a Mandalay Bay security guard approached the door, McMahill said. The gunman fired through the door at least twice and struck the guard in the leg.

“He was acting independently,” Lombardo said. “He got separated from our team.”

Police would later determine that Paddock had installed two security cameras outside the room and one peering out through the room’s peephole, giving him the ability to see the guard coming down the hall.

By then, Paddock had stopped shooting. Investigators believe he had been firing off and on for nine to 11 minutes, McMahill said.

It is unclear why Paddock stopped shooting — and the fact that he did took a few minutes to register with harried officers.

“It’s been a while since we’ve heard any shots,” an officer said about 12 minutes after the attack began. “Does anybody have eyes on the shooter?”

Officers decided he was no longer an active shooter, and decided not to enter the room immediately, McMahill said.

Pinpointing the location of a gunman that quickly is “very, very good work,” Heal said. “The behavior changes when they become the prey, not the predator.”

Police feared there could be another gunman roaming the hotel, armed with automatic weapons. Officers and guards moved through the hotel, evacuating guests and clearing the way for SWAT teams to arrive.

Officers descended on movie theaters, casino floors and the Sports Book Grill, hoping to protect tourists and gamblers from another attack.

“Be advised, we’re getting multiple calls about shooters at multiple locations,” a dispatcher said at 11:15 p.m.

Pedestrians on the Strip described an older white man in fatigues with a black bag hiding in a mobile home at a Motel 6. Tourists at the New York-New York and the Tropicana hotels reported hearing shots. All those reports were false.

It’s common for anyone under fire to report “shadow or ghost sightings,” Heal said. Witnesses can see anyone with a gun — including a police officer — as a possible shooter, he said, adding to the confusion.

By then, two SWAT teams had gathered at the valet stand at Mandalay Bay, and a third was headed upstairs.

As the officers converged in the 32nd floor, they heard no sound from Paddock’s room. A SWAT officer switched on his radio.

“We’re gonna sit on the suspect’s door,” he said. “I need everybody in that hallway to be aware of it and get back. We need to pop this and see if we can get any type of response from this guy.”

Five seconds passed. Then, one officer radioed, “Breach, breach, breach!” and an explosion rattled the hallway.

Five minutes later, a SWAT officer turned on his radio to report that Paddock was dead in his room. He is believed to have committed suicide before officers entered, but the timing of his death is still unclear.