Professional boxers break down what to expect at the Saturday super-fight between UFC champion Conor McGregor and 49-0, five-division boxing champion Floyd Mayweather Jr.

McGregor is stepping outside his comfort zone of the UFC octagon to fight the greatest boxer of the past generation. The Times consulted those who know McGregor and boxing best to assess if the underdog from Ireland can shock Mayweather. "The only way I can give him a chance is through self-belief. He's got self-belief like I've never seen in anyone before." "It's very hard to believe [McGregor will win]...I do give him his props on being very respectful to the sport, and how courageous he is getting in there and taking a tough task like Mayweather." "I respect his sport... I don't follow UFC, but I hear a lot about this guy, and he's supposed to be at the top of his game...but this isn't the UFC, this is boxing."

This will be McGregor’s first professional bout in a boxing ring. Professional boxing rings can vary in size depending on the competition, but most major bouts use a 20-by-20-foot ring. A UFC octagon is larger and lacks the sharp corners of a boxing ring. The UFC’s octagon melds boxing’s square ring with wrestling’s circular ring. What McGregor won't (or shouldn't) do

Several moves that rules allow McGregor to use in UFC are illegal in boxing. McGregor and Mayweather say their contract states they must fight using boxing’s classic Queensberry rules. If McGregor violates those rules, Mayweather has said McGregor will forfeit a significant amount of his purse, and can be sued if the violation injures Mayweather. According to Conlan, the threat of losing a significant amount of money is enough for McGregor to resist the temptation of using the kicks, knees and elbows permissible in MMA action.

Hitting opponents when they're down

McGregor did this to finish off former featherweight champion Jose Aldo, but in boxing, a knocked down opponent is allowed time to recover in a standing eight-count. McGregor relied on kicks routinely in defeating Chad Mendes and Nate Diaz to set up his powerful left-handed punch. While Mayweather has a storied history of coyly delivering elbows away from the referee's view, McGregor is not allowed to throw the Muay Thai blows permitted in the UFC. McGregor is a striking specialist who’s 21-3 with 18 knockouts and has never been knocked out. The Irishman’s endurance will be tested by Mayweather, who has dominated 12-round fights against the likes of Manny Pacquiao and Canelo Alvarez. That’s 36 minutes of work. McGregor's longest fight totaled 25 minutes.

How their records compare As Mayweather has aged and moved up in weight during his extended career, the more likely he's been to go 12 rounds and let the judges decide the winner. McGregor, whose professional career is nearly 15 years shorter than Mayweather's, has shown he prefers to pursue a rapid finish.

Because of Mayweather's tendency to fight through the final round, Robles says McGregor must be prepared to go the distance.

"Mayweather's going to come in and fight his fight...gonna box the lights out of [McGregor] and counterpunch him for 12 rounds if he has to."

While creature-of-habit Mayweather has returned to his home gym in Las Vegas to prepare under his father/trainer, Floyd Mayweather Sr., he said age has led him to curtail working out on consecutive days. McGregor has been in Las Vegas for the last few months but has declined to align with a world-class boxing trainer, instead maintaining his relationship with head MMA coach John Kavanagh.

We asked Conlan, Magdaleno and Robles to inspect videos of McGregor and Mayweather boxing. Here's what they had to say:

McGregor worked out on bags during his recent media-day session at UFC headquarters in Las Vegas. Boxing experts have scoffed at his punching style and even a warm-up routine he displayed that day.

"He looks very green...how much can you really learn in a couple of months?" 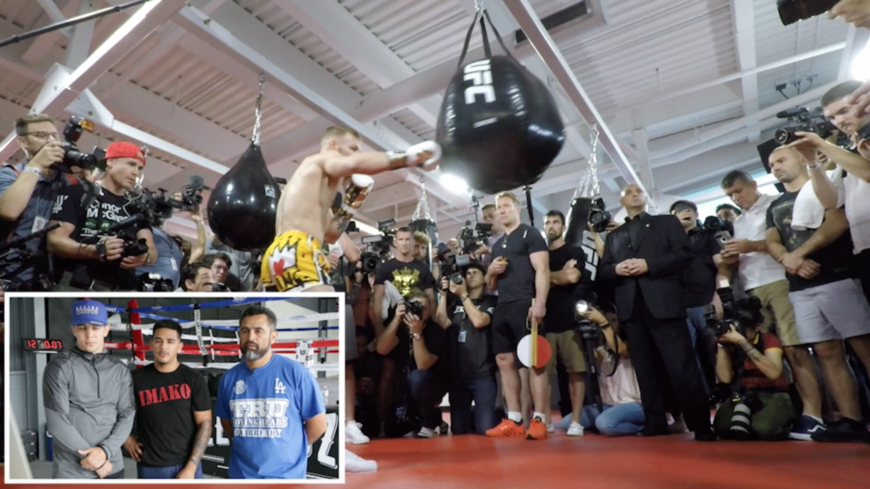 Showing the sophisticated punching style he’s studiously developed since his days boxing as a child, Mayweather stands as the most disciplined, committed fighter of the past 25 years, and his recent workout on his media day revealed no noticeable slippage.

"You can just see the difference between the way Mayweather hits the bag and [McGregor]...he's 40 but he trains like a 21-year-old." 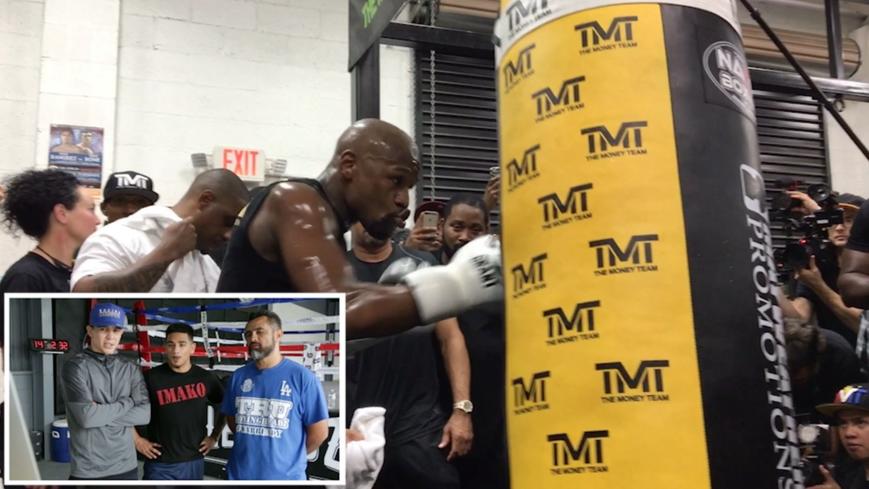 How McGregor could win

The extremely confident Irishman has risen from non-televised UFC undercard action to a string of impressive triumphs that included dethroning longtime featherweight champion Jose Aldo, moving up 25 pounds above that weight class to avenge a loss to strong-boxing UFC foe Nate Diaz, then dominating gritty lightweight champion Eddie Alvarez. He says he believes he can topple Mayweather by relying not so much on pure boxing skill but on his ability to pounce on the openings he’s become used to spotting in the UFC cage.

"His best tactic is to go in and give it his all as early as possible – put it all on the line – and if it doesn't work he'll go out on a sheet."

"Give [Mayweather] a surprise and go hard, and see how Floyd reacts to it - and try to do it as soon as possible because 36 minutes is a long time."

"The problem is, it's not gonna be a surprise anymore. I can't imagine McGregor taking his time and trying to box the guy and measure him up...you can't beat Mayweather at his game."

Tale of the tape

McGregor and Mayweather are champions in their own right, but on Aug. 26, McGregor makes his pro boxing debut after less than one year of limited training. Mayweather emerges from his two-year retirement for a 50th professional bout that would allow him to surpass former heavyweight champion Rocky Marciano’s undefeated mark. Here's how the two stack up: Note: The original article misidentified an image of Conor McGregor fighting Dustin Poirier. The page has been updated to reflect this change.