In 2016, Josh Cohen had traveled from Santa Ana to Cooperstown, N.Y., with his baseball team for a game, but he couldn’t play because his stomach hurt so much.

At first, he thought it could be food poisoning, but then the pain lasted for a couple of weeks.

A couple of years later, he ended up in the emergency room for what his doctor initially thought was appendicitis. That’s when Cohen, now 17, was diagnosed with ulcerative colitis, an inflammatory bowel disease that causes inflammation and ulcers in the colon.

While the cause is unknown, genetics appears to play a role. Cohen’s mother has a milder case of the disease, a chronic condition which has no cure but can often be managed through medication and diet.

Cohen had never been particularly interested in cooking, but his diagnosis forced him to think more carefully about his food intake and what triggered his flare-ups.

“Seventy percent of our patients will require surgery in their lifetimes,” explained Jessica Reiter-Flax, senior manager of fundraising campaigns and volunteer engagement for the Crohn’s & Colitis Foundation. “But a lot of patients have found, by trial and error, the foods that agree with them.”

Cohen quickly realized that dairy and fried foods irritated his stomach, and it helps to keep his diet gluten-free.

“A family friend of ours published a cookbook a while ago, and that gave me the idea of ‘What if I made a cookbook geared for other kids who are experiencing what I experienced?” he said. “And hopefully I can make it a little easier for them.”

In July, Cohen self-published “Comfort Food For An Uncomfortable Stomach, By a Kid for Kids,” to share what has worked for him.

All proceeds of the book benefit the Orange County Chapter of the Crohn’s & Colitis Foundation to fund research and provide resources for its patients. The mission is to find a cure and to provide quality of life for kids and adults with the autoimmune disease.

Reiter-Flax said Cohen first reached out to her earlier this year leading up to the foundation’s Take Steps fundraiser in June.

Usually, they host an annual walk to fundraise, but this year, they had to do it all virtually. Cohen was one of their top fundraisers, raising $1,600 despite the pandemic.

Reiter-Flax said Cohen had already done all the work and self-published his cookbook himself before reaching out to tell her that he’d like the proceeds to go to the foundation.

“We’re so happy he chose us,” she said. “He’s just a really great kid. He just wants to help people, he takes initiative, and he’s so business-savvy for his age.”

The cover of the book is Cohen’s favorite recipe: waffles made with almond flour.

“We’d triple the recipe, bag it, and my whole family would eat it,” Cohen said, of the “Lisa’s Waffles” recipe, named after his mother. 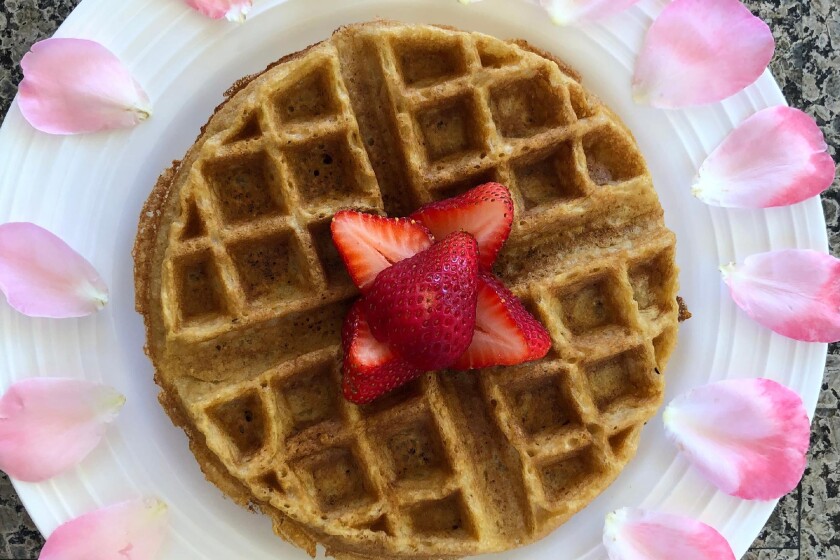 Breakfast food is his favorite, and his cookbook also includes recipes for banana bread and pumpkin chocolate chip muffins.

Other categories include entrees like steak and marinade made with coconut aminos, pineapple juice, sesame oil, garlic, honey, fish sauce and ginger; sides like homemade hummus; and treats including a peanut butter shake and chocolate almond butter bars.

There are also family recipes like “Pearl’s Thanksgiving Raspberry Cranberry Sauce,” named after his grandmother.

In addition to 18 recipes, Cohen gives tips and healthy food brand recommendations, and he penned a dedication to his mother as an introduction to the book. There, he jokes about a holiday a decade ago, where his mom gifted him a KitchenAid mixing bowl, while his older brother got a Star Wars light saber.

He thought it was “lame” at the time, but “I would later understand the importance of cooking and the value of this very thoughtful gift that has lasted for years, used hundreds of times, while the light saber my brother received was broken in a couple weeks,” he wrote.

He wants to teach people how he has been able to continue his enjoyment of food despite his limitations, with some simple adjustments “that allowed me to feel like I wasn’t missing out.”

“The recipes can really be for anyone,” Cohen said. “But I just really wanted to help kids.”

“Comfort Food For An Uncomfortable Stomach, By a Kid for Kids” is available on Amazon.com. On Oct. 23, the Crohn’s & Colitis Foundation will be hosting a “Raise Your Spirits” fundraiser, offering at-home tastings kits, while the Southern California Distillery provides a virtual tour of the spirit samples, food pairing and snacks. For more information, visit crohnscolitisfoundation.org.

Support our coverage by becoming a digital subscriber.

Ada Tseng is an assistant editor on the utility journalism team at the L.A. Times. The utility journalism team publishes stories and information that help people solve problems, answer questions and make big decisions about life in and around Los Angeles. She previously led coverage of Orange County as TimesOC’s entertainment editor, and she co-hosts the Asian American pop culture history podcast Saturday School.

More on this Subject