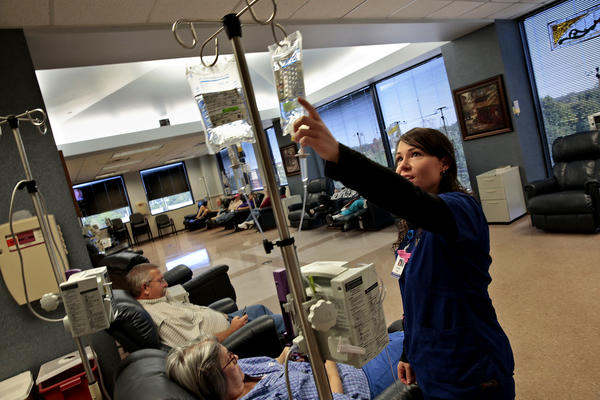 
Patients begin lining up outside Capitol City Family Health Center before the doors open at 7:30 a.m.

The clinic, on a ragged stretch of the boulevard that separates the black and white sections of town, is a refuge for thousands of this old southern capital’s poorest and sickest residents. They come seeking relief from diabetes, heart disease and other debilitating illnesses.

Twelve hundred miles up the Mississippi River, in the shadow of a public housing tower in St. Paul, Minn., the waiting room at the Open Cities Health Center also fills daily with the city’s poorest.

But the patients in Minnesota receive a very different kind of care, which leads to very different outcomes. They are more likely to get recommended checkups and cancer screenings. If very ill, they can usually see specialists. Their doctors rely on sophisticated data to track results.

Diabetics at the St. Paul clinic are twice as likely as those in Baton Rouge to have their blood sugar under control. That can slow the onset of more serious problems such as kidney failure and blindness.

Young patients with asthma also benefit from Minnesota’s more comprehensive medical system. Asthmatic children in the state’s poorest neighborhoods are 37% less likely than those in Louisiana to end up in a hospital.

And poor seniors in Minnesota are half as likely to be prescribed a high-risk drug and 38% less likely to go to the emergency room for an ailment that could have been treated in a doctor’s office.

“Being low income doesn’t destine you to poor healthcare. Where you live matters,” said David Radley, a health policy expert who has led several studies on geographic disparities in medical care for the Commonwealth Fund, a nonpartisan research foundation that analyzes healthcare systems.

The extremes in America’s health system are striking. In some U.S. communities, people live longer, healthier lives than the residents of Europe’s wealthiest nations. In America’s least healthy regions, premature death and disease are as common as in parts of Asia and Latin America. 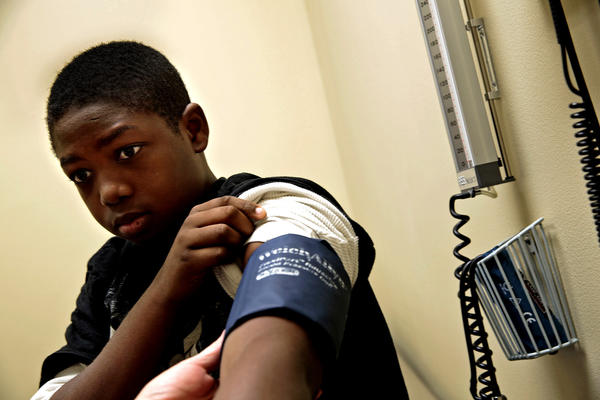 At Capitol City Family Health Center, Isaac Williams, 14, gets his blood pressure taken during a physical. The eighth-grader hopes to join the basketball team at school. More photos

President Obama’s health law, which takes full effect this year, was designed to narrow some of the disparities by expanding coverage and providing new tools for improving quality. But with some states embracing the law and others resisting it, the gaps in health from one region to another are poised to widen.

Poverty and wealth are part of the answer. How much schooling people have, what they eat and whether they smoke also play a role.

But so do decisions by doctors, hospitals, business leaders and elected officials about what local health systems should do. A review of data from the nation’s 306 healthcare markets, as well as interviews with scores of experts and visits to communities from Maine to Hawaii, points to many common features of America’s healthiest places.

Louisiana has opted not to expand Medicaid under President Obama’s health law, and it bars publicly subsidized coverage for working-age adults without children.

Those ingredients are often missing in places such as Baton Rouge, where a poorly organized health system joins poverty, low education and bad diet to form a toxic mix.

“Nearly every day, I am seeing families who need the help of doctors, and it’s just not there,” said the Rev. Melvin Rushing, an engineer who left a career in the petrochemical industry to become a pastor. He leads two African American congregations not far from the clinic.

Built on a bluff on the Mississippi River 80 miles from New Orleans, Baton Rouge began as a port town where sugar cane and cotton were shipped from nearby plantations. Grand antebellum homes shaded by towering live oaks still line the river to the north and south.

Today, an ExxonMobil refinery, one of the nation’s largest, and the growing Louisiana State University and state government campuses give the area one of the region’s few diversified economies.

Chronic diseases such as diabetes and cancer are commonplace. One in 5 patients at Capitol City Family has high blood pressure. One in 10 is infected with HIV, the virus that causes AIDS.

I just wish I had gone to the doctor sooner.” — Ralph Washington, 59 Share this quote

In addition to the crush of illness, nearly half the clinic’s patients lack insurance, as few businesses in the area offer health benefits and the government safety net covers fewer people than in many other states.

“Patients drift in and out. Sometimes they will go missing for months,” said Constance McNeely, the clinic’s nurse manager. “When they come back, it’s like we’re starting over.”

Other patients show up only after they discover a serious disease.

Ralph Washington, 59, left work at one of Baton Rouge’s chemical plants more than a decade ago to start his own laundry and dry-cleaning business. In recent years, times have been tough, and health insurance was out of the question. Until last year, he hadn’t had a checkup or lab test in years.

When Washington’s legs started swelling in February last year, his wife pushed him to go the emergency room. He was diagnosed with Type 2 diabetes.

Doctors and nurses at Capitol City Family, which charges a reduced fee for his care, helped get Washington’s blood sugar under control. But the diabetes and high blood pressure had already taken a toll; he is now on several medications to slow the advance of heart disease, a common diabetes complication.

“I just wish I had gone to the doctor sooner,” he said.

Healthcare access and outcomes vary enormously across the country from one community to another. Explore our interactive project to compare characteristics of the nation’s 306 healthcare markets.

Lack of insurance “is really the No. 1 driver of our healthcare challenges,” said Scott Wester, chief executive of Baton Rouge’s largest hospital system, Our Lady of the Lake Regional Medical Center, which last year took over the city’s charity health system.

The St. Paul clinic also faces challenges as a growing number of immigrants from East Africa and Southeast Asia seek care there. Four in 10 patients speak little or no English. Many can’t afford medical care.

But the clinic has several key advantages over its counterpart to the south. State leaders of both parties have worked to ensure the vast majority of Minnesota residents have health coverage, which makes it easier for the clinic to find specialists who are willing to see its patients.

A strong collaborative spirit in the state also has yielded partnerships among clinics, doctors and hospitals, as well as businesses and government leaders.

Those kinds of partnerships, a hallmark of many of the nation’s healthiest places, are rarer in communities where civic traditions are weaker, particularly those with a history of segregation. Doctors and nurses at the Baton Rouge clinic describe what they call a “treat and street” mentality at some medical facilities that do just enough for poor patients to avoid running afoul of a federal law that prohibits turning away the sick.

At the Minnesota clinic, doctors and nurses often have a reassuring message for patients: “We’ll get you set up.” 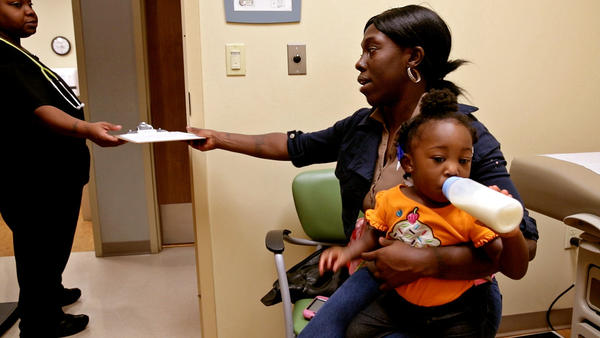 Edricka Louis holds her daughter, Kendra Curtis, 1, as they wait for a nurse at Capitol City Family. More photos

When Malvin Wade, 52, a former cook with a history of heart problems, came in recently after chest pain, a nurse arranged a follow-up appointment with a cardiologist. Gregory Blakey, 11, who had been to the emergency room three times with asthma attacks, got an appointment with a pulmonologist.

Roderick Jackson, a 57-year-old laborer who came in for a routine physical, was up to date on his screenings, having had his recommended colonoscopy.

“They always take care of me,” said Jackson, a Louisiana native who has lived in Minnesota for more than three decades.

“I have seen what it’s like elsewhere,” said Open Cities’ medical director, Dr. Fred Lewis, who grew up in a small Texas town near the Louisiana border.

“This is an unusual place,” he said. “We can actually treat our patients here. We can get them the help they need.” 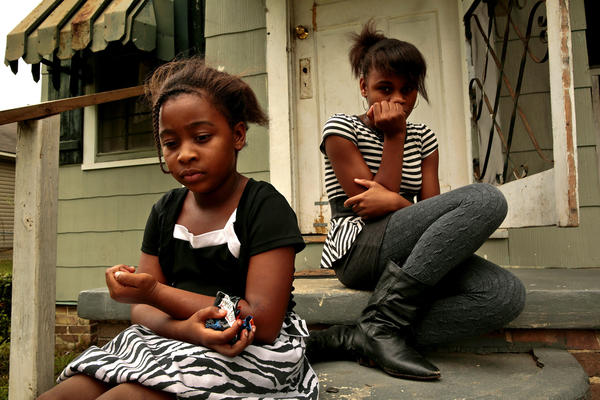 Ceaira Revish, 9, left, and Bobbie Parker, 13, live in the Mid-City neighborhood. Bobbie says she had lead poisoning as a young child and spent months in a hospital. More photos

Back in Baton Rouge, doctors and nurses at Capitol City Family struggle to find neurologists, gastroenterologists and other specialists willing to take their patients, even though the community has the same number of specialists per capita as St. Paul. Every day, the clinic faxes out referral requests. Most are never answered.

Clinics in the state charity system offer many specialty services, including eye surgery, cardiac catheterization and chemotherapy. But demand is so high that wait times have stretched as long as a year.

“Basically, patients have to be desperately ill to get access to a lot of care,” said Dr. Luther Stewart, one of the clinic’s physicians. “You have to do what you can, rather than what you might want to do.”

In the coming year, the gap in available care at the two clinics may widen.

If we don’t get to him, he’s going to end up in the hospital.” — Sam Boadu, nurse practitioner Share this quote

Minnesota has opened its Medicaid program to all poor adults under the Affordable Care Act. At a desk next to the billing counter at Open Cities, two new employees help uninsured patients sign up for coverage.

Louisiana has opted not to expand Medicaid and bars publicly subsidized coverage for working-age adults without children.

Working parents in Louisiana get publicly funded medical care only if they make less than a quarter of the federal poverty level, or $4,687 for a family of three. By contrast, Minnesota will make fully subsidized coverage available this year to families of three making up to $26,951.

Patients at the St. Paul clinic also benefit from one of the nation’s first statewide systems to track care and develop better ways to keep patients healthy.

Hundreds of Minnesota doctors report whether diabetic patients have controlled blood pressure, how long patients with depression go before relapsing, and whether young patients who have been prescribed drugs for attention deficit hyperactivity disorder get follow-up care.

“It’s really hard to improve if you don’t have data,” said Jim Chase, president of Minnesota Community Measurement, a nonprofit organization funded by the healthcare industry and the state that gathers and publishes data on doctors’ performance. 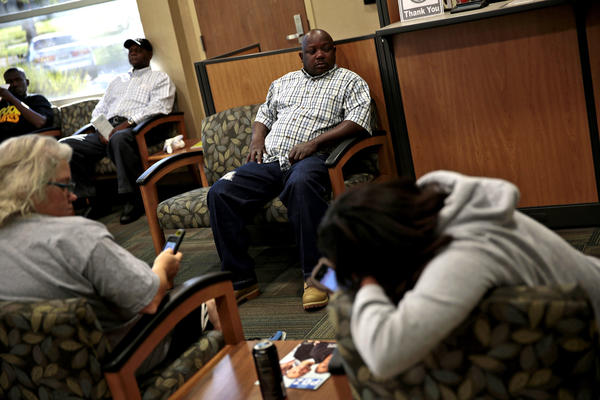 In Louisiana, just a quarter of physician practices in 2012 used electronic medical records that can do things such as track medications and store lab results. That is the lowest rate in the nation, according to federal data.

Wester, the hospital chief executive, acknowledged that effectively caring for all patients in his state remains a distant goal. “It’s going to be a long haul, 10 years or more,” he said.

In Minnesota, the focus on measuring quality has changed the way Open Cities cares for patients.

Every morning, the medical team huddles in clinic manager Roxanne Tisdale’s office to review the day’s appointments and highlight patients who’ve recently been to the hospital or are due for an important test.

At one recent huddle, Tisdale called out several diabetics overdue for blood sugar tests, a middle-aged woman in need of a mammogram and another who might benefit from seeing the clinic’s mental health specialist.

Sam Boadu, a nurse practitioner, reminded the team not to turn away one of his patients — an immigrant with limited English and unreliable transportation — even if the patient showed up late. “If we don’t get to him, he’s going to end up in the hospital,” Boadu cautioned.