Fires in Southeast Asia may be emitting more greenhouse gases than the entire U.S.

A toxic haze has repeatedly wafted over huge swaths of Southeast Asia in the last month, causing school closures, grounded flights, canceled events and widespread concern about public health risks across the region. Here’s what you need to know about the Great Haze of 2015.

Nearly 100,000 fires are burning, setting up what looks to be the worst fire year in the region since 2006. The carbon emissions from the blazes have now surpassed those of the entire United States — the world’s second-largest emitter of greenhouse gases — on 26 out of 44 days since September, according to a report by the World Resources Institute.

That’s because about half the fires are in peatland areas — concentrated mainly in South Sumatra, South and Central Kalimantan, and Papua — that are among Earth’s biggest carbon storehouses.

Compared with ordinary fires, peat fires can emit up to 10 times more methane, a greenhouse gas whose impact on climate change is 25 times more potent than carbon dioxide, according to the U.S. Environmental Protection Agency.

The immediate effects on health are even more worrying.

The upshot is a whole lot of smoke — enough to create a billowy haze which, since late September, has engulfed swaths of Indonesia, Brunei, Malaysia, Singapore, southern Thailand, Vietnam, Cambodia and the Philippines.

On Monday night, in parts of Singapore, one of the world’s most fastidious cities, readings of PM2.5 — particulate matter small enough to enter the bloodstream — soared to 471, shrouding the city in a deep grey smog that called to mind industrial centers like Beijing. 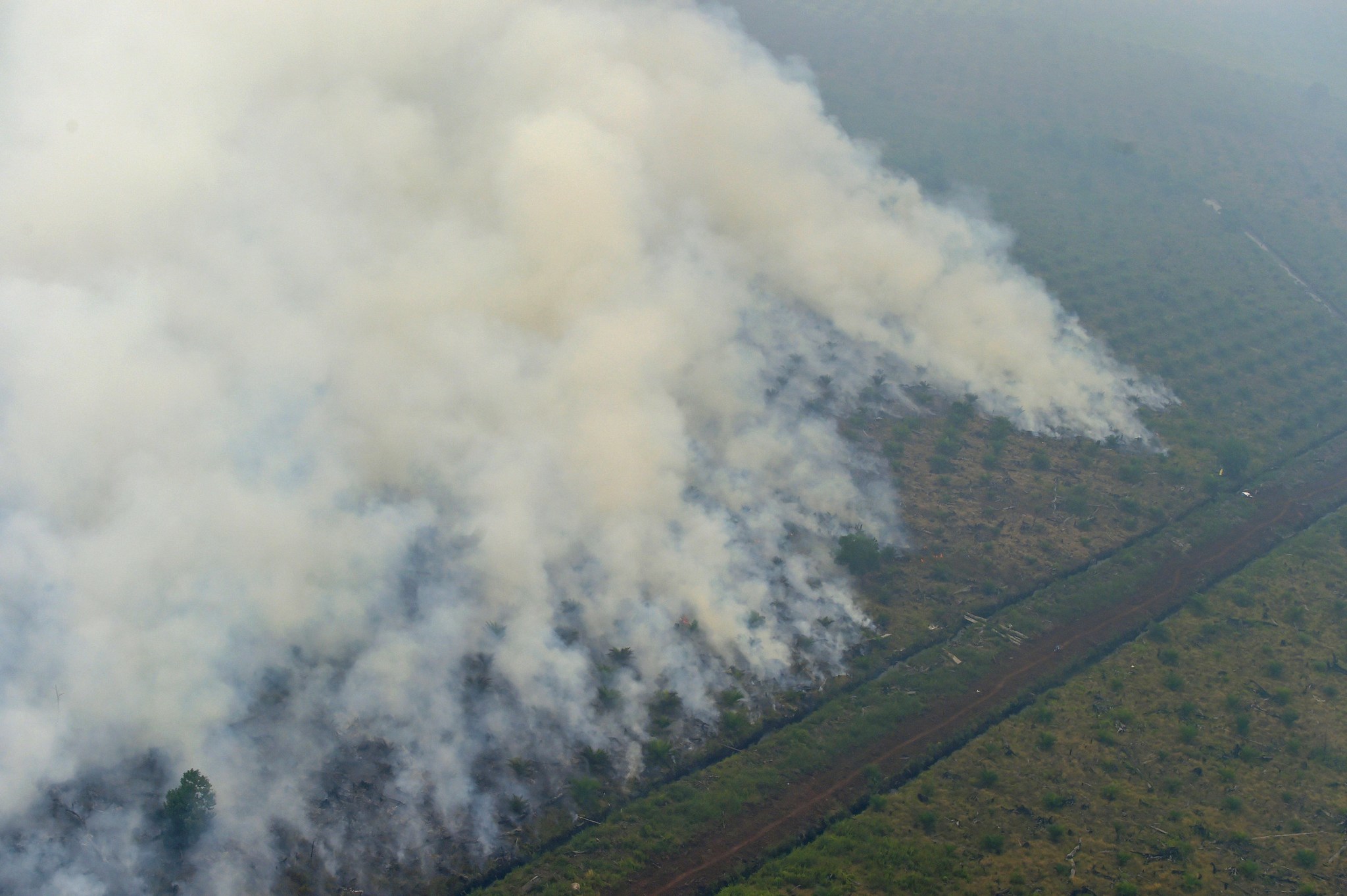 How bad is it, really?

It’s bad. Aside from posing a clear public health hazard — the World Health Organization estimated last May that 7 million deaths a year were linked to air pollution — the haze has put a major damper on the daily lives of millions.

Singapore canceled the 2015 FINA Swimming World Cup, and Malaysia canceled the Kuala Lumpur marathon. As monsoon winds blew the haze northeast from Indonesia, officials on the Philippine island of Cebu grounded flights due to low visibility.

The Malaysian government has advised asthma sufferers to remain indoors and ordered temporary school closures across four states and in the capital, Kuala Lumpur. In early September, an Indonesian government ministry declared a state of emergency across six provinces. Some of the country’s pharmacies have started selling bottled oxygen. 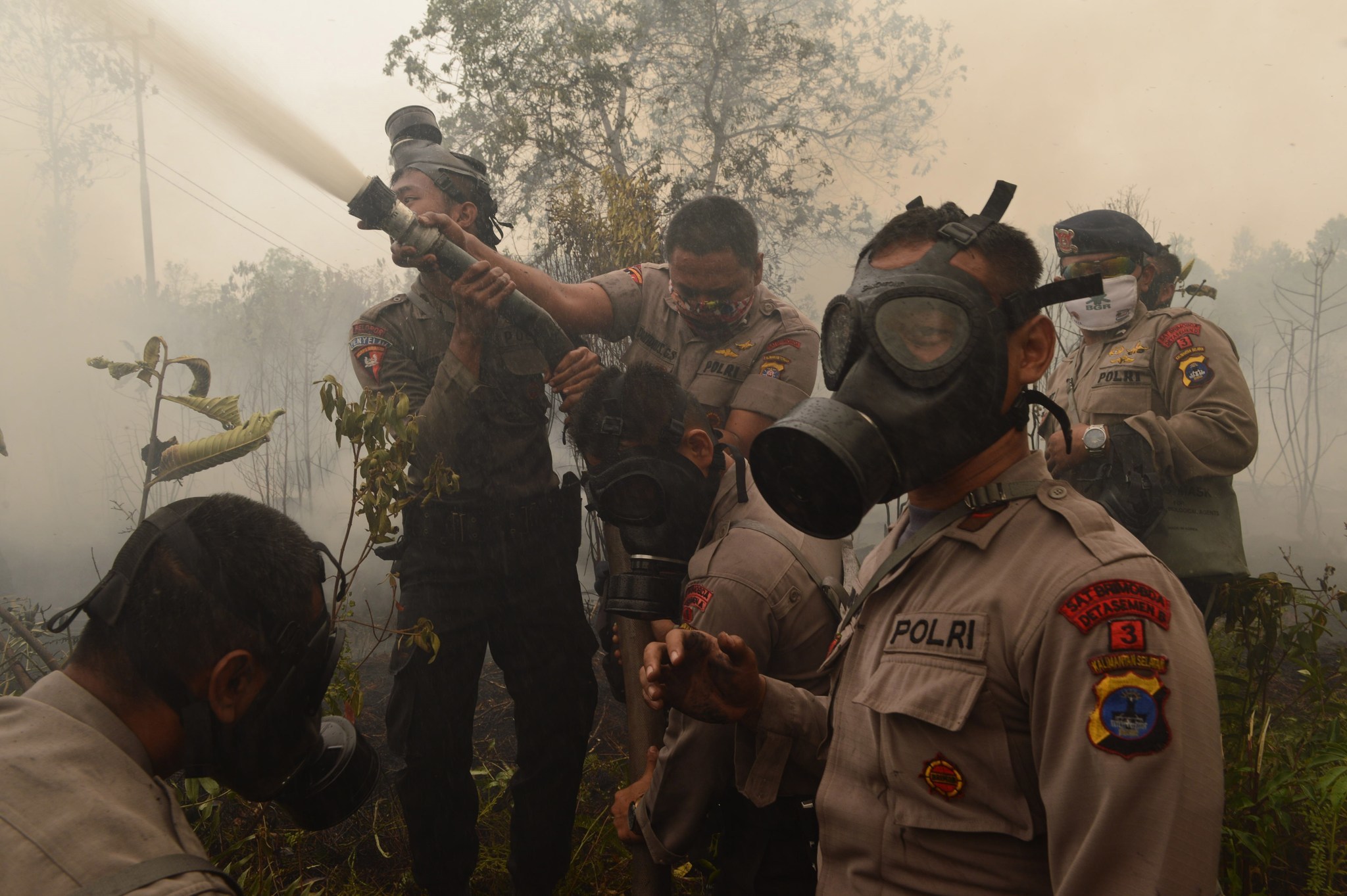 Has this happened before?

The haze has been a periodic event since the 1970s. Yet this year, a particularly dry autumn in Indonesia, brought on by the El Nino weather event, has made the haze one of the worst on record — about as bad as in 2006, when NASA satellite images showed the smoky clouds extending all the way to South Korea. 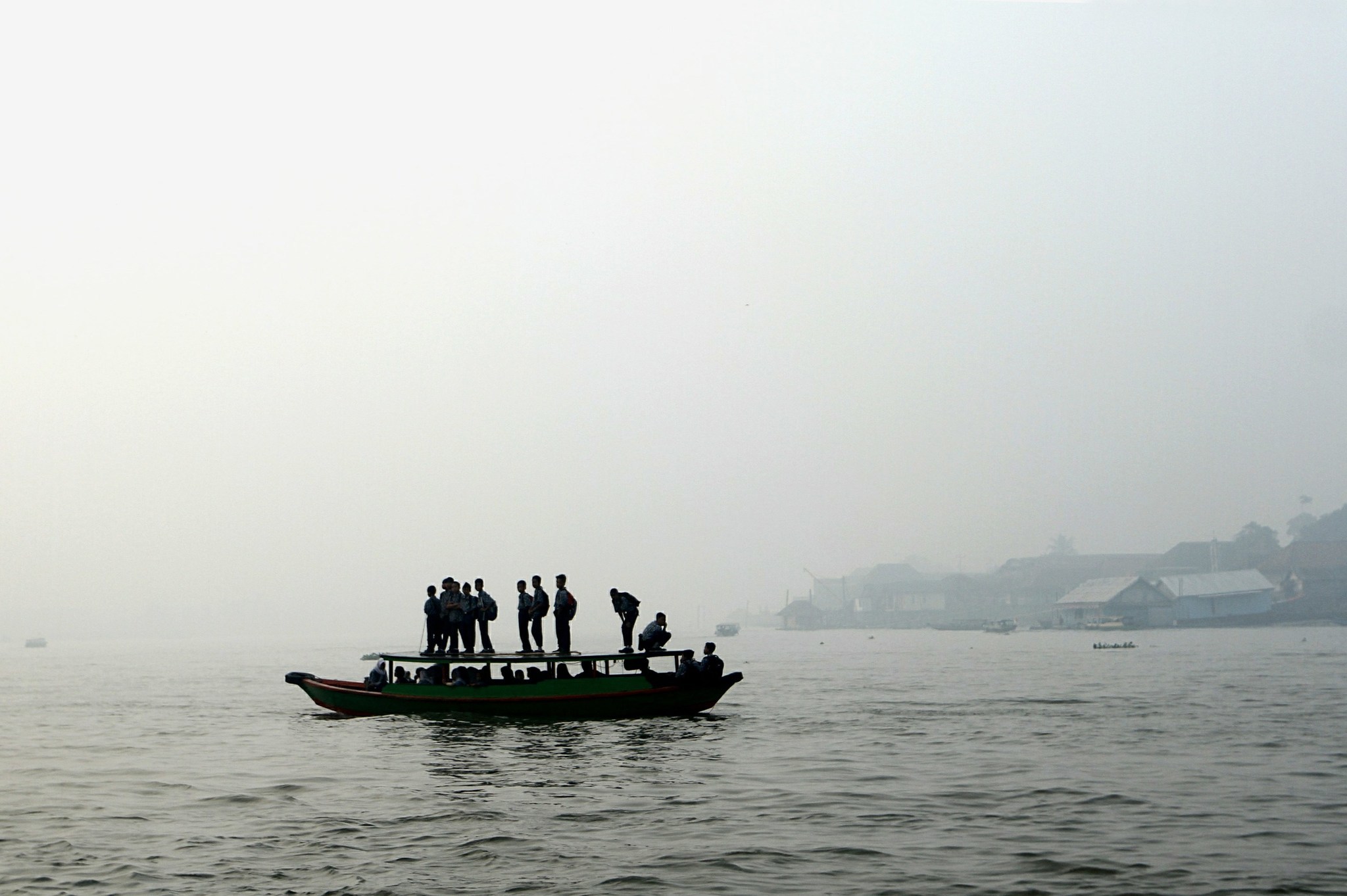 Indonesian students cross a river by boat under a blanket of haze from forest fires on Sumatra island. (Abdul Qodir / AFP/ Getty Images)

What is this doing to the environment?

Nearly 100,000 fires have been detected in Indonesia this year, according to Guido van der Werf, an expert on wildfire emissions at VU University Amsterdam. More than half of the fires have occurred on carbon-packed peatland — land covered in dense layers of decayed organic matter, which produces thick, acrid smoke when it burns.

Together, they’ve generated an estimated 600 million tons of greenhouse gases, he wrote on the Global Fire Emissions Database — about as much as Germany emits in a year. 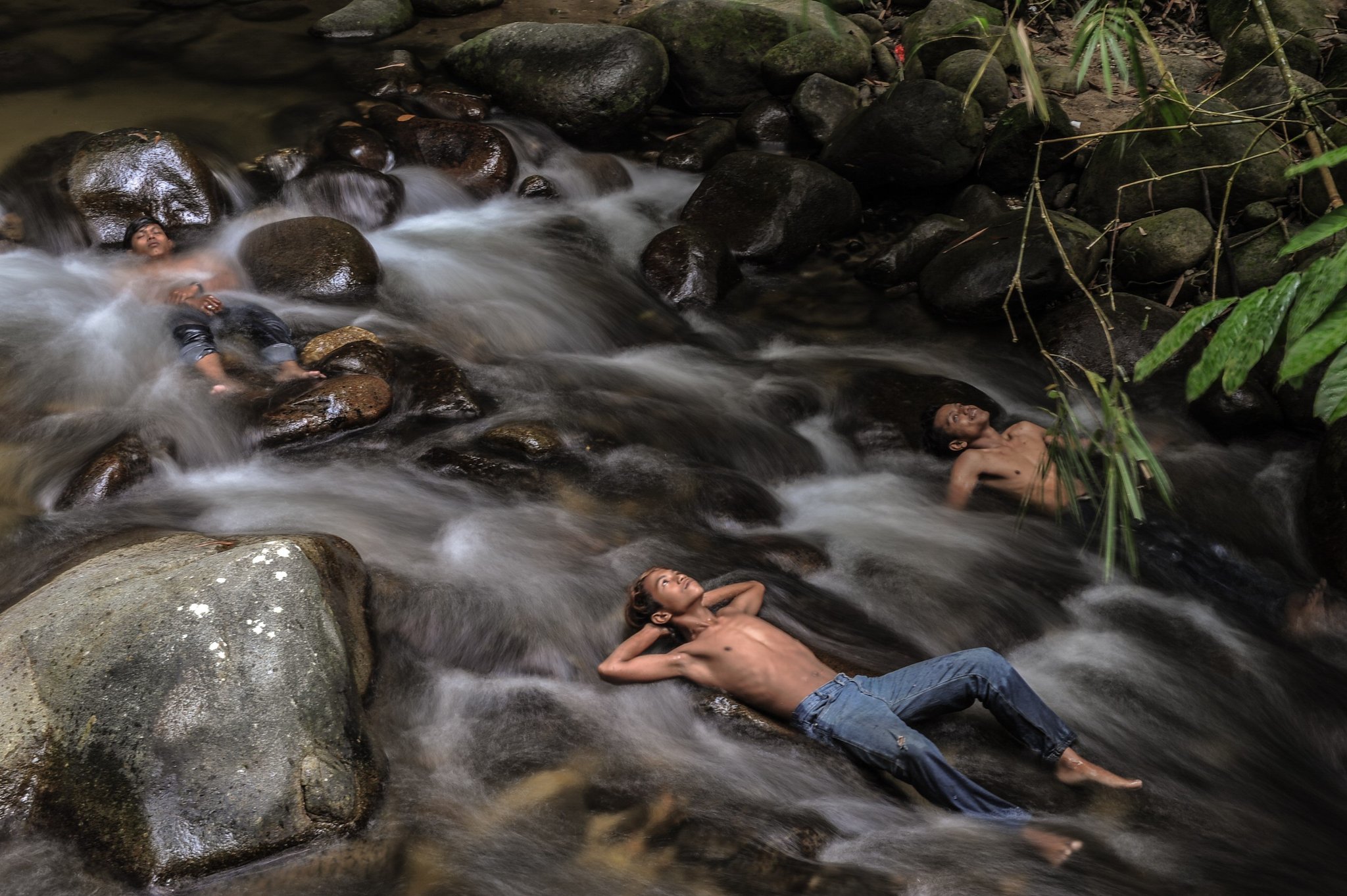 Malaysian youths cool off in a river as schools remain closed due to hazy conditions in Hulu Langat. (Mohd Rasfan / AFP/ Getty Images)

What are countries doing about it?

Indonesia has deployed 14 helicopters to douse flames in Sumatra and Kalimantan, and has begun encouraging plantations to adopt more environmentally friendly agricultural techniques on peatlands.

Early this month, the country’s government — after repeatedly insisting that it could take care of the fires on its own — agreed to accept offers of personnel and equipment from Singapore, Malaysia, Russia and Japan to help douse the infernos. Singapore is also doing its bit: this year, the country began allowing legislators to prosecute companies — both local and foreign — that are involved in causing the fires.

"We have done the best we can,” the head of Indonesia's disaster agency, Willem Rampangilei, told reporters in early October. "It is understandable if other countries are upset, but we Indonesians are more upset." 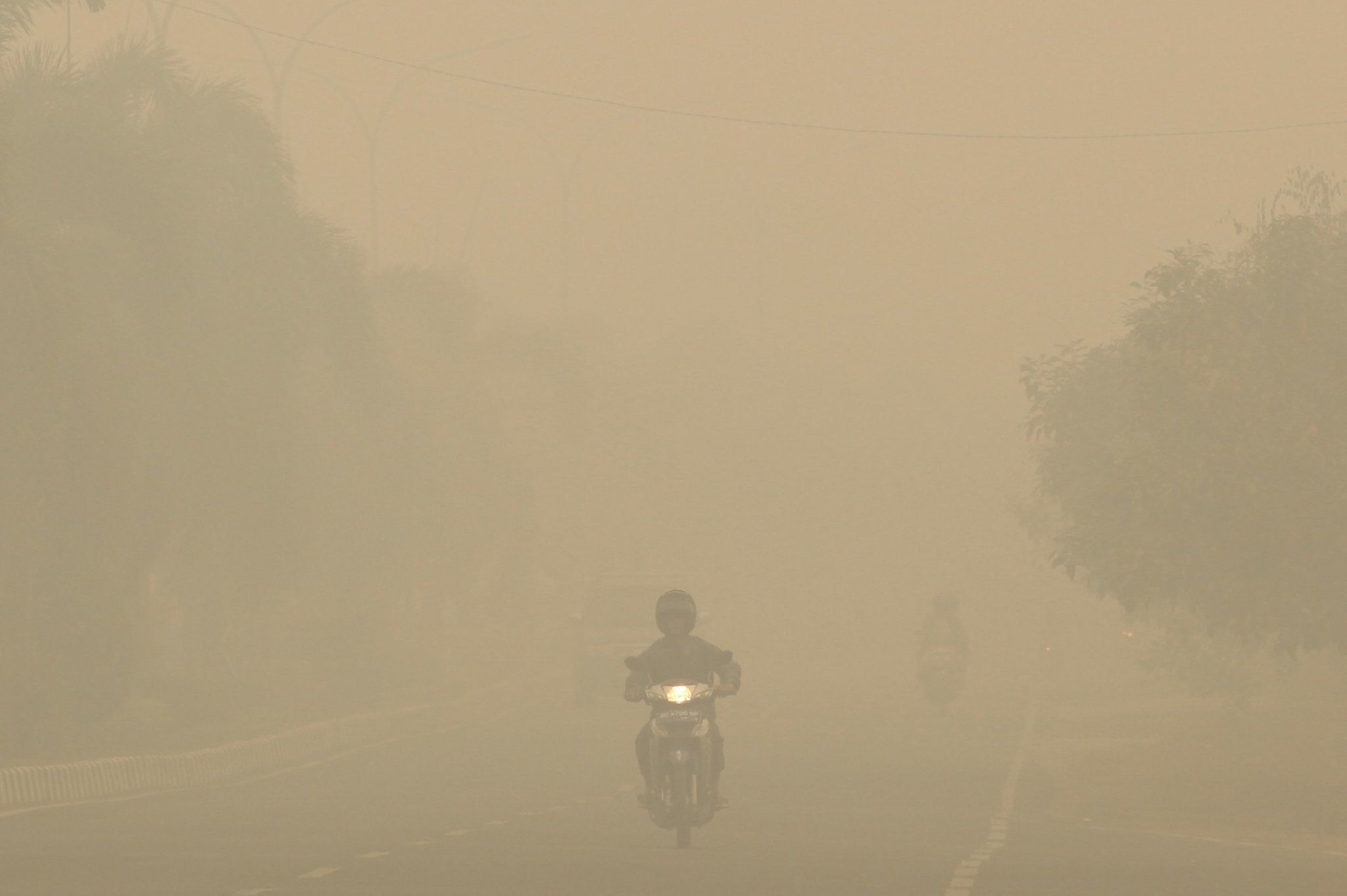 However, the Indonesian government has come under fire for not doing more to put the problem to rest.

In late September, about 150 protesters from 10 student and nonprofit groups gathered in Palangka Raya, in Central Kalimantan province, to protest what they described as official inaction. “We want disaster management teams to be prepared in advance in order to safeguard people’s health,” Ali Wardana, one of the protest leaders, told the Singaporean broadcaster ChannelNewsAsia. “And we want sanctions against those who burn the land for profit.”

In China, strong-arm tour guides are forcing people to shop