Click on an image above to jump to the actor's thoughts about holiday TV programs.

It’s that time of year that has people choosing Christmas TV movies and cuddle over Netflix and chill.

True progress in Hollywood mostly has yet to trickle down to this genre for those who aren't white or heterosexual.

Still, November and December (even October, in some cases) bring a flurry of holiday programming on broadcast, cable and streaming networks. CBS is colorizing the classic Christmas episode of “I Love Lucy.” ABC is celebrating the 50th anniversary of “A Charlie Brown Christmas.” ABC Family is the go-to destination for “Dr. Seuss’ How the Grinch Stole Christmas.” Even Netflix has gotten into the spirit with its Bill Murray holiday special “A Very Murray Christmas.”

And then there are the made-for-TV Christmas movies on Hallmark, Lifetime, UP TV, and other cable networks. We spoke to some of the actors about their thoughts on the genre.


Watch the trailer for "A Christmas Detour."

Yeah, there can be a cheesiness to them, but there’s always a heart thread that runs through all of them. I like getting those messages from fans who watch them and genuinely take something away from them.

Hallmark Synopsis: Two New York City-bound travelers find themselves inextricably linked when a snowstorm reroutes them to an airport hotel in Buffalo. Ever the eternal optimist and hopeless romantic, Paige desperately needs to find a way back home to meet her fiance’s parents before her forthcoming wedding. And it’s somehow up to fellow passenger Dylan MacKenzie, who is permanently soured on romance following a recent heartbreak. Yet Dylan somehow rises to the occasion to become Paige’s chivalrous helpmate. The pair are joined on this misadventure by an older couple named Frank and Maxine trying to get to Connecticut. As their madcap journey ensues, our foursome will find plenty of surprises in store.


Watch the trailer for "A Christmas Melody."

I personally love watching them. It’s what we watch whenever I’m visiting my parents. It’s content that makes you feel good. With everything going on in the world, it’s nice to have something that, for an hour and a half or two hours, can take your mind off something.

Hallmark Synopsis: “A Christmas Melody” revolves around Kristin (Lacey Chabert), a beautiful, stylish divorcee who is a talented clothing designer and her young daughter. Kristin has just had to close her small Manhattan boutique to return to her Ohio home town and live in her parents’ former home. It’s an adjustment for Kristin and Emily – especially when she runs into her former high school rival Melissa (Mariah Carey). Melissa is president of the PTA and tries to make Kristen feel as unwelcome as possible. Kristen and Emily struggle to find their new normal with the help of the music teacher Danny (Brennan Elliott) and Kristin’s Aunt Sarah (Kathy Najimy), the local coffee shop owner. With a little holiday magic and music, Kristin and Emily find that home is where the heart is.


Watch the trailer for "My One Christmas Wish."

I watch ‘Miracle on 34th Street,’ ‘It’s a Wonderful Life,’ and ‘Elf’ every year. Those are my traditions. And I think it’s awesome that I get to maybe contribute work that can be part of someone else’s tradition.

UP TV synopsis: My One Christmas Wish” is based on the true story of Jackie Turner, a woman growing up in the foster care system who so desperately wanted a family for Christmas that she advertised on Craigslist… and people answered! 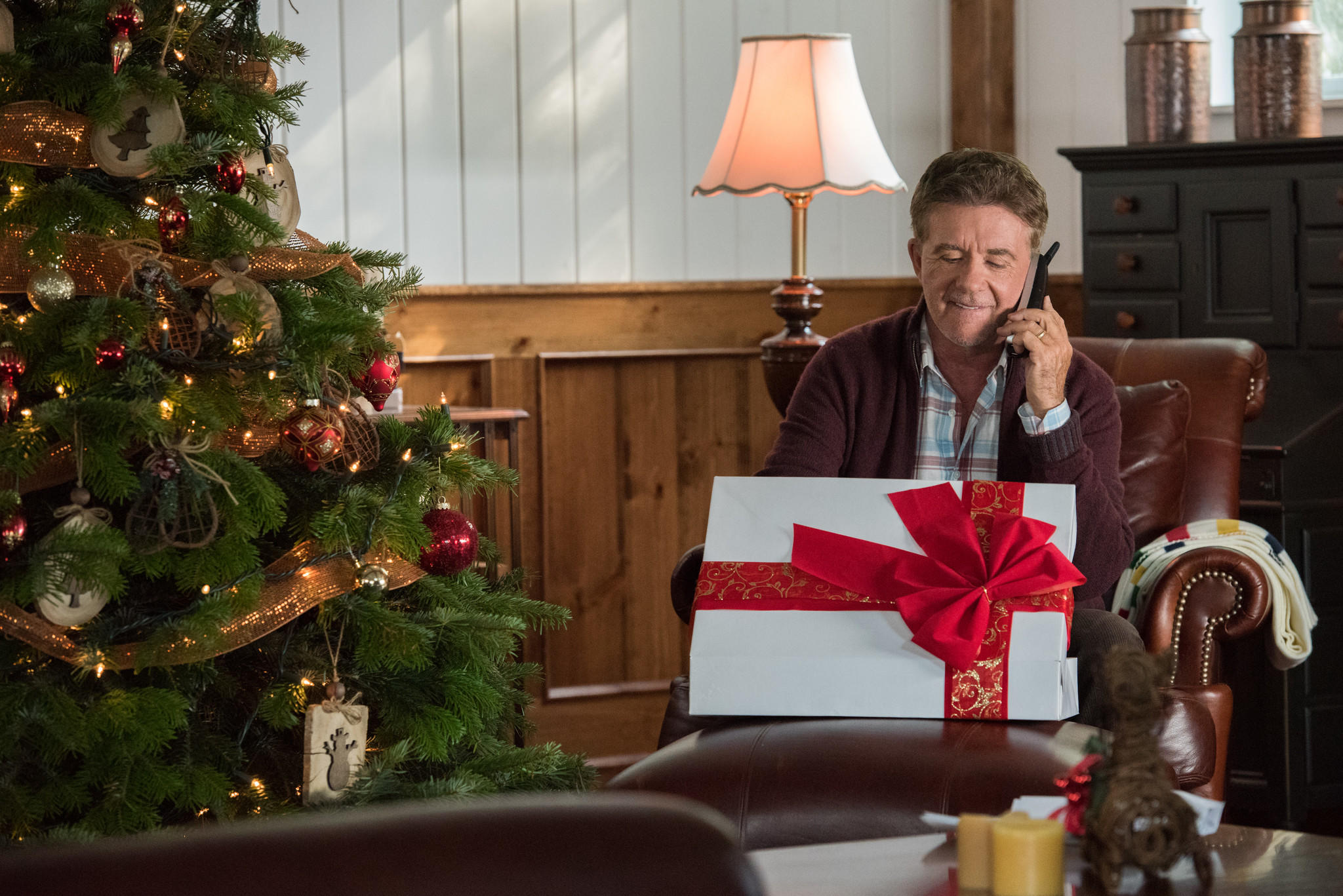 A scene from "Wish Upon a Christmas." (Lifetime)

I have done about a dozen or so holiday movies. I have now, probably, played every possible Christmas role except Prancer and Vixen.

Lifetime synopsis:When business executive Amelia returns home to help a family-run ornament company, the employees see her as their savior who is coming in to rescue the company. They are heart-broken and shocked to learn that her plan to get the company on track involves massive layoffs. As Amelia prepares for the holiday ‘trimmings’, she finds herself rekindling an old romance with her high school boyfriend Jesse, who is also the company’s owner. She also soon begins to see the charm of the local business - but will she be able to save it in time? 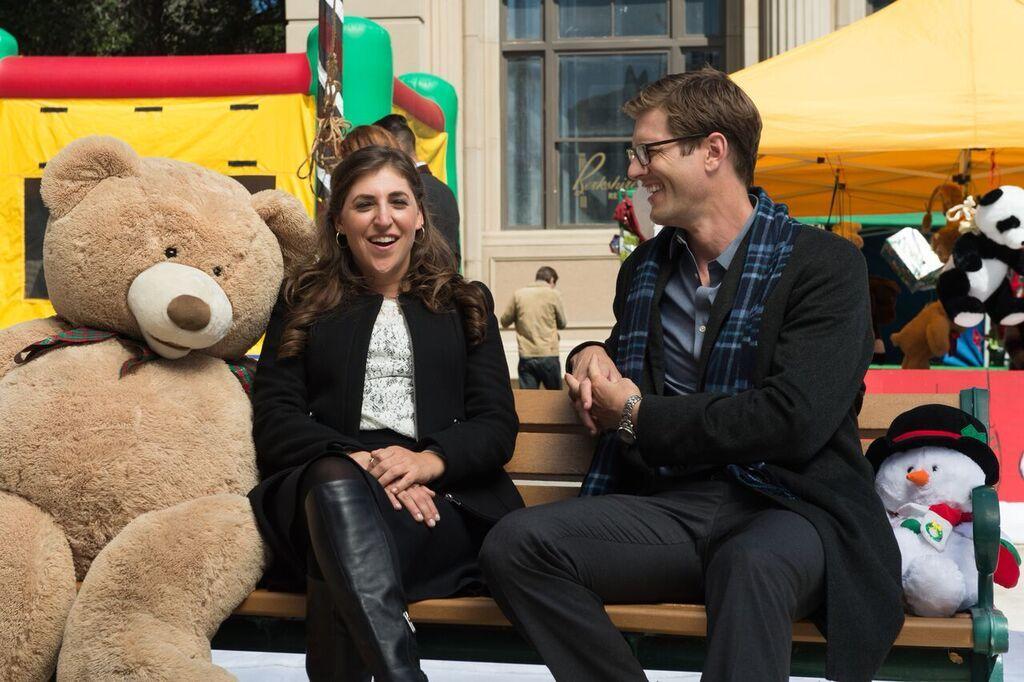 A scene from "The Flight Before Christmas." (Hybrid / Lifetime)

Growing up in a traditional Jewish household, I didn’t understand a lot of the Christmas movies that were very popular. But I grew up watching a lot of classic Christmas movies — 'It’s a Wonderful Life' and 'Miracle on 34th Street.' That feel-goodness of the holiday season is something that is not just for people who celebrate Christmas.

'The Flight Before Christmas,' Dec. 5

Lifetime synopsis: Excited to take the next step in their relationship and move in with her boyfriend, Stephanie is crushed when he drops the bombshell that he wants to break up. Faced with spending the holidays heartbroken and homeless, she decides to fly home to Connecticut. On a red-eye the day before Christmas, Stephanie finds herself seated next to Michael, who is planning to propose to his college girlfriend. The two get off to a rocky start but things get even worse when the pilot announces that a huge, unexpected snowstorm is crossing the country. Their flight is diverted to a small town in Montana where Stephanie snags the last available room at the town’s bed and breakfast. Despite their differences, she offers to share the room with Michael and try their best to get along.

For the Record:
9:29 a.m.: An earlier version of this post included an innacurate synopsis for "The Flight Before Christmas."


Watch the trailer for "Angels in the Snow."

I think the music, the gifting, the being grateful and thankful — all those reminders in these movies make us feel warm and fuzzy inside. They just really soften us. Right after Halloween, we all start to look for that. I think that’s why these movies are so popular.

UP TV synopsis: Charles and Judith Montgomery have a strained marriage mostly due to Charles’ non-stop work schedule. Their children, Alexander, Jennifer and Emily sense the tension and fight among themselves, as well. They are headed to the lavish cabin that Charles built for his family in the hopes of having a special family holiday. But the bickering continues until Joe and Marilyn Tucker and their children Lucie and Robbie are forced to spend Christmas with them as they wait out a blizzard. The love, respect and happiness exhibited by the Tuckers has a profound effect on the Montgomerys. 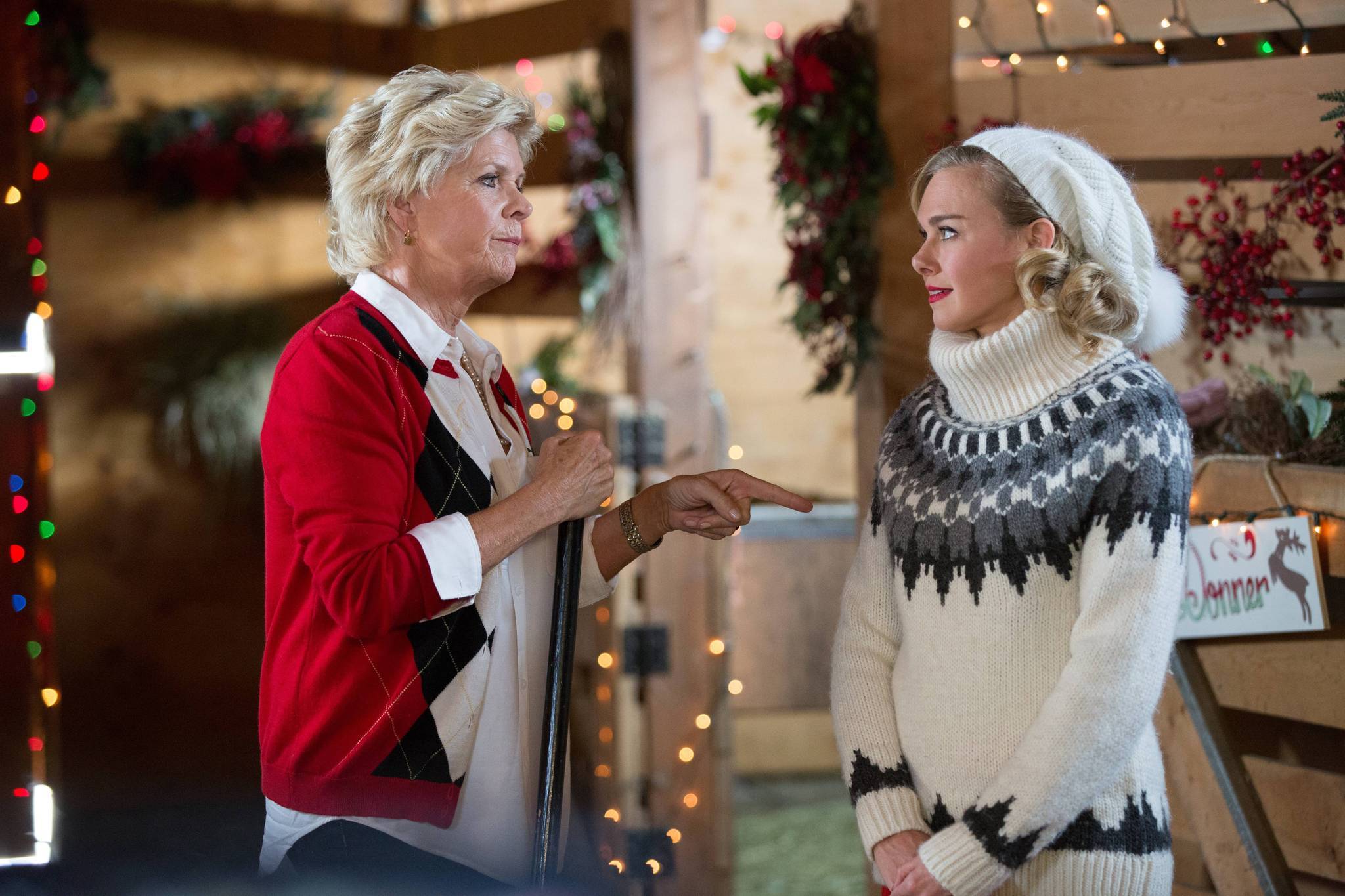 A scene from "Becoming Santa." (Lifetime)

I was put off by the sentimentality initially. It’s not to my palate. But I think they really make an effort to be quite honest and moving and with an emphasis on family. It’s hard to not go along with that.

Lifetime synopsis: Holly has never introduced her toy designer boyfriend Connor to her family and has only revealed that they live "up north." As their relationship intensifies, Holly knows she can't wait any longer and decides to bring Conner to meet her parents for Christmas. Connor is in for a shock when he discovers he’s actually headed to the North Pole and Holly’s parents are none other than Santa and Mrs. Claus! Connor embraces his time there despite running into Holly’s ex, Jack Frost. Will Conner be ready to take their relationship to the next level – especially when it means he would be next in line to be Santa?


Watch the trailer for "A Baby for Christmas."

They remind us what is important in our lives. I think that’s part of why the genre is so popular.

UP TV synopsis: “A Baby for Christmas” is the third installment of UP’s Chandler family Christmas movies. Marci and Blair are expecting a baby and the whole family learns the true meaning of Christmas. 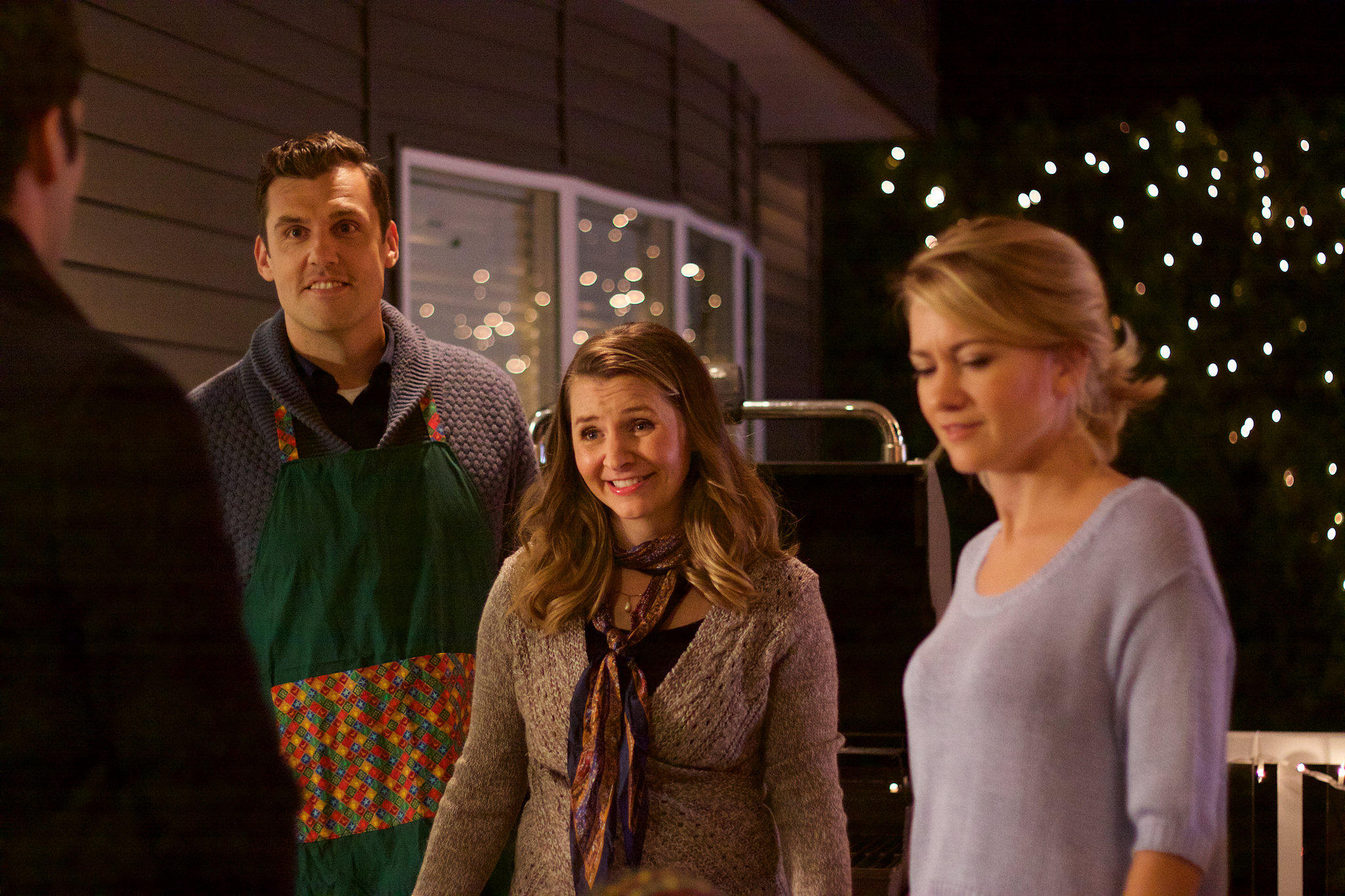 A scene from "A Gift Wrapped Christmas." (Bentley Photographic / Lifetime)

It is always fun doing Christmas movies because you’re basically shooting them in July and wearing big ol’ jackets and sweating like crazy.

Lifetime synopsis: Personal shopper Gwen's newest client, Charlie, is a high-rolling, workaholic, single father. When Gwen meets his 8-year-old son, Owen, during a package drop, she is saddened to see just how little time Charlie spends with him. Determined to get Charlie to appreciate his family, Gwen makes it her Christmas mission to get him into the festive spirit. As she gets closer to Charlie and Owen, she also discovers what she wants for the holidays.