’s budget would eliminate federal funding for an earthquake early warning system being developed for California and the rest of the West Coast which, if enacted, probably would kill the long-planned effort.

The budget proposal for the year ending in September 2018 also seeks to eliminate U.S. funding for critical tsunami-monitoring stations in oceans and reduce funds for a next-generation weather forecasting system.

Scientists said the loss of federal funding would derail the early warning system, which officials hope would one day send public earthquake alerts to smartphones seconds or even minutes before a temblor.

“It probably would kill the early warning system if we thought there were no more funding coming from the U.S. Geological Survey,” said John Vidale, director of the Pacific Northwest Seismic Network and a seismology professor at the University of Washington.

In a statement announcing the USGS budget, the Department of the Interior said the budget “focuses on core USGS science and efficiency,” and asserted that the budget would be able to fund monitoring of the nation’s earthquakes.

Bill Leith, the USGS acting associate director for natural hazards, said a decision was made to focus on USGS’ service core capabilities — services that are already offered, rather than a new service such as the earthquake early warning system.

The budget document posted on the U.S. Department of the Interior’s website did not elaborate on the reason for cutting the alert system, saying only: “This elimination would end USGS efforts to implement the ShakeAlert earthquake early warning system.”

The earthquake early warning system, being built by the USGS in conjunction with several major universities, still needs more seismic sensors installed across Washington, Oregon and Northern California, and it needs a staff of 40 to 50 people to install and maintain equipment as well as monitor the computer systems.

Already, hiring has proven difficult. Since Trump was inaugurated, the Department of the Interior has frozen hiring of senior scientists, including those needed to operate the early warning network.

“There are people we’ve identified and interviewed and we’d like to hire them as soon as we have permission,” Vidale said. “These are the people who would keep the computer doing what we need to to get the early warning system up and operating.”

Without ongoing funding, the ShakeAlert system would need to lay off employees, said Tom Heaton, a Caltech professor of engineering seismology.

“If that funding went away, we would have to lay off a number of the developers and the development would basically cease,” Heaton said. “I’m not sure how we could possibly recover from that.”

Such a blow probably would lead Heaton, who said he is nearing retirement, to work on other issues.

“I’ve been kind of excited at the possibility we’ll have a system up and running by the time my career was done. That hope would be dashed in that case,” Heaton said.

Companies have been seeking to use the system

Companies have started to notice the potential benefits of an earthquake early warning system. Intel, for example, “is very eager to use early warning to make their manufacturing safer,” Vidale said. Computer companies can use seconds of warning before shaking comes to halt sensitive manufacturing processes — preventing equipment from clanging together and being damaged in the shaking. That would enable factories to resume operations much faster after the earthquake.

And factories using toxic chemicals can prevent problems by securing operations before shaking arrives, too, Vidale said. And just telling people that shaking is coming so that they can drop, cover and hold on could save lives and reduce injuries.

“This is a simple technology. We know how to do it,” Vidale said. “Even Mongolia is doing it.”

The budget proposal would also reduce $800,000 in funding for earthquake monitoring in Alaska and the central and eastern United States, where earthquakes are a risk on the East Coast, in the South and in the Midwest. The reduction may “slow the rate of updates to seismic provisions in building codes and provide less science to support risk mitigation actions. The USGS would also suspend its annual forecast of hazard related to both natural and induced seismicity.”

A champion of the earthquake early warning system, Rep. (D-Burbank), said it would be foolish to end it.

“After years of educating the public and Congress to the benefits of the earthquake early warning system, we have been able to deliver $23.4 million in federal funding to help build out an early warning system across the West Coast,” Schiff said in a statement.

“But we cannot stop now, just as monitoring stations are being built out and the system is expanding its reach. Support for the early warning system in Congress is sustained, growing and bipartisan, and we will not accept this attempt by the president to cut a vital funding stream for a program that will protect life, property and critical infrastructure,” Schiff said.

Rep. (R-Corona), who serves on the House Appropriations Committee, said in a statement Friday that he believes the “earthquake early warning system can be a lifesaving tool for the millions of Californians and other Americans who live in earthquake-prone areas.

“That’s why I have been at the forefront of advocating for funding of the program, including the $10.2 million in funding that was signed into law earlier this year,” Calvert said. “Obviously, the president’s budget proposes some reductions for this program and other agencies that fall within the Interior Appropriations Subcommittee’s jurisdiction, which I oversee as Chairman. During the appropriations process, important programs like this will be given full consideration.”

U.S. far behind other nations

The United States is far behind other nations in developing an earthquake early warning system. In Japan, for instance, national TV broadcasts and cellphones are interrupted with warnings about incoming shaking, and for significant quakes, high-speed trains automatically slow down, as slower speeds reduce the threat of a deadly derailment.

“All of Japanese society is very happy for their early warning system,” Heaton said. “Nobody in Japan really wants to turn it off. They view it as a great step ahead for them. Californians will, too.”

In the last few years, lawmakers in Washington and Sacramento have started to devote significant dollars to developing the system.

“Eliminating the $10 million a year that the government has been spending would stop the program and waste the $23 million that has already been invested,” Jones said in an email. “The talented scientists and technicians that are working on the project now will go to other jobs, so their experience and expertise would be lost.

“Many life- and money-saving measures would not be available when the next earthquake strikes,” she added.

How the early warnings work

The earthquake early warning system works on a simple principle: The shaking from an earthquake travels at about the speed of sound through rock — slower than the speed of today's communications systems. That means it would take more than a minute for, say, a magnitude 7.8 earthquake that starts at the Salton Sea to shake up Los Angeles, 150 miles away, traveling on the state’s longest fault, the San Andreas.

The prototype system has had some early successes. When a magnitude 6.0 earthquake hit Napa in 2014, the system gave researchers in San Francisco about eight seconds of warning before shaking began. Last year, 30 seconds of warning reached downtown L.A. before the ground shook from a magnitude 4.4 quake centered near Banning.

As the system gets built, officials have talked about allowing places such as classrooms, offices, shopping malls, amusement parks and police and fire stations to have ready access to alerts. Eventually, bigger benefits are expected: technology to open elevators at the next floor, sparing occupants from being trapped, and warnings that could halt the flow of natural gas through major pipelines, preventing catastrophic fires.

Officials last week had said they hoped to have an early version of the system sometime next year.

The proposed budget also affects other agencies monitoring natural disasters. The U.S. Department of Commerce, which oversees the , faces eliminating funding — $12 million — that pays for a crucial network of buoys in the Pacific and Atlantic oceans, the Caribbean Sea and Gulf of Mexico. The network can sense an incoming tsunami, enabling officials to send watches and warnings for the United States.

This is known as the Deep-Ocean Assessment and Reporting of Tsunamis, or DART. A budget document said that the termination of the program “is anticipated to have a 20% or greater impact on the accuracy, certainty, and timeliness of NOAA’s tsunami watches and warnings.”

The DART buoys are essential for telling local authorities whether the public needs to be evacuated from the coast, Vidale said. “Those DART buoys are our eyes out in the sea for incoming tsunamis from distant earthquakes.”

“The zeroing out of the DART buoys is just startling,” said University of Washington atmospheric sciences professor Cliff Mass.

The agency is also facing a proposed reduction of funding for a network of automated weather stations that can indicate rapidly deteriorating weather conditions, called Mesonet. That means NOAA won’t be able to monitor these conditions in all 50 states, but will have to “prioritize states most susceptible to tornadoes and severe weather.”

The budget also proposes reducing funding for an array of sensors in the ocean designed to detect El Niño, which officials said may delay the recognition of the onset of phenomenon and hamper the ability to deal with its effects, such as heavy rain or drought.

Slowing or ending programs to improve weather and tornado forecasts

The budget proposal also would slow the development of the ’s next-generation weather forecasting system. Scientists and officials have been pushing for a major upgrade to the weather service’s forecasting system, which is well behind European modeling systems, Mass said. That shortcoming was seen in the U.S. forecasting of Hurricane Sandy as it struck New York, he said.

“What they’re proposing to do is cutting a large amount of money out, which would delay it at best and kill it at worst,” Mass said. “If you look at the statistics for virtually any place in the country, you’ll see the American model is well behind.”

The proposal would also end an effort to extend operational weather outlooks from 16 days to 30 days, saving $5 million, and halt a project that would improve tornado forecasts in the southeastern United States, which would also save $5 million.

In an executive summary accompanying the budget proposal, the Commerce Department said that “the termination and rescaling of programs, while challenging and impactful, is necessary as we move toward a more efficient government model that refocuses on national security and core government functions.” 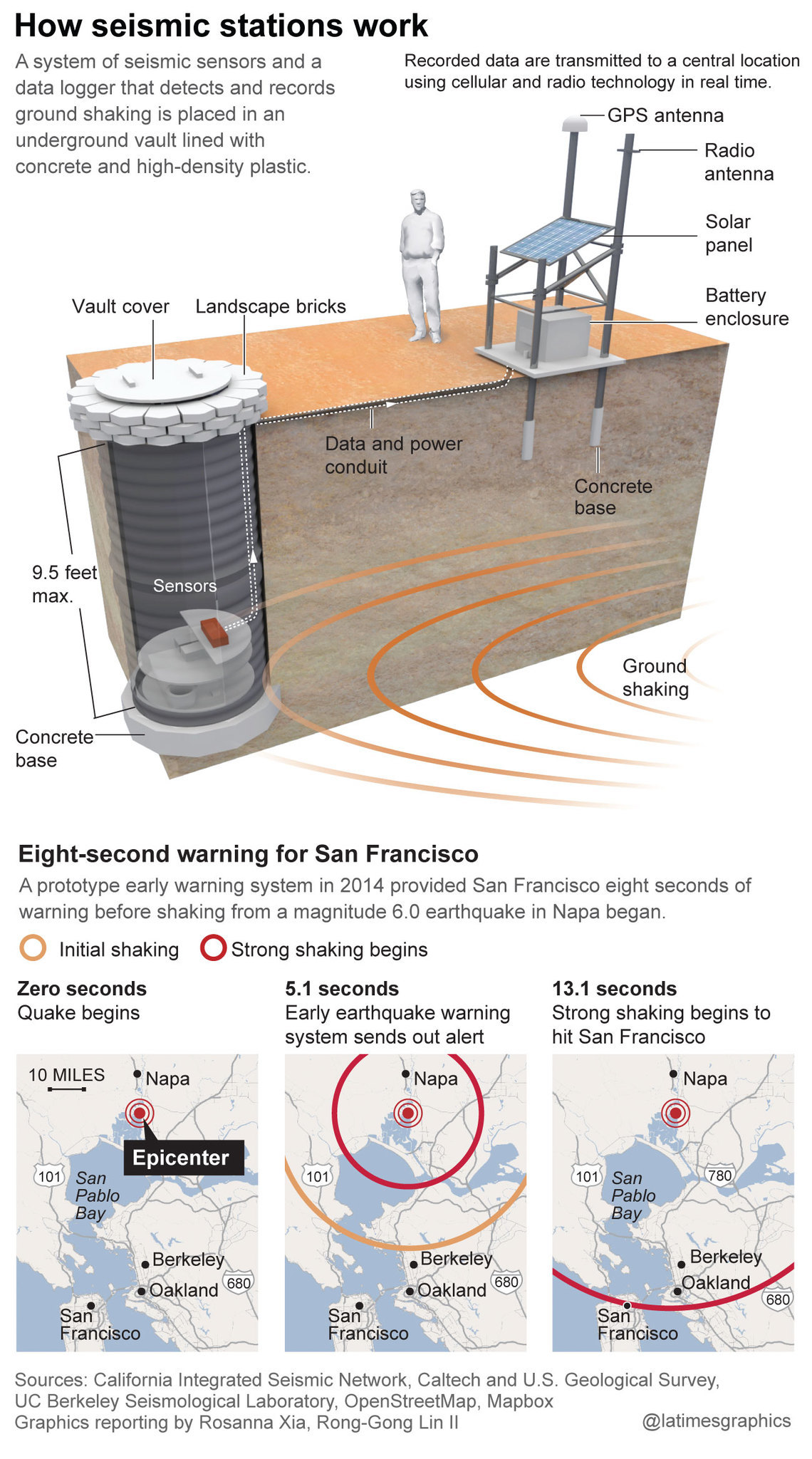 After years of planning, California is likely to roll out its earthquake warning system next year

May 26, 12 a.m. This article was updated with details on proposals to end efforts to extend operational weather outlooks and improve tornado forecasts.

11:10 p.m.: This article was updated with a statement from seismologist Lucy Jones.

9:40 p.m.: This article has been updated to include comments from the USGS and the Commerce Department.

This article was originally published on May 25 at 8 p.m..