Talk about a “poverty trap”! The phrase was recently used by House Budget Committee Chairman Paul D. Ryan, R-Wisc., to suggest that the nation’s panoply of programs to aid low-income households was keeping them from rising into the middle class.

Wal-Mart’s annual report, issued late last week, puts a different spin on things. Buried within the long list of risk factors disclosed to its shareholders--that is, factors “outside our control” that could materially affect financial performance--are these: “changes in the amount of payments made under the Supplement Nutrition Assistance Plan and other public assistance plans, (and) changes in the eligibility requirements of public assistance plans.”

Wal-Mart followers say this is the first time the company has made a disclosure like that.

The Supplemental Nutrition Assistance Plan, or SNAP, is the formal name for food stamps, which were slashed late last year and again this year by your Congress. The deal Congress reached on the farm bill and food stamps in January will cut an average $90 a month from the food assistance for 850,000 families. That’s on top of the cut averaging $29 a month (for a family of three) imposed in November.

Wal-Mart says it gets more than half its sales from its grocery departments. Since low-income shoppers are a big part of its clientele, it’s unsurprising that that squealing you hear is coming from its annual report. There’s no indication that Wal-Mart executives stepped up to the plate during the debate in Washington to warn Congress off these cuts in assistance to its customers.

One interesting sidelight of Wal-Mart’s disclosure is that it doesn’t actually discuss how the company benefits from public assistance programs by sticking the U.S. taxpayer with the bill for keeping its workforce fed and clothed. As Barry Ritholtz observed in November, the retailer is one of the nation’s biggest “welfare queens”: In many states its employees are the largest group of Medicaid and food stamp recipients.

Who’s paying for Wal-Mart’s addiction to paying its employees less than a living wage? You are.

But let’s not blame Wal-Mart alone. On average, America’s working families have been getting cheated of a fair share of their labor and productivity since at least the early 1980s, as can be seen in this chart from economists Atif Mian and Amir Sufi: 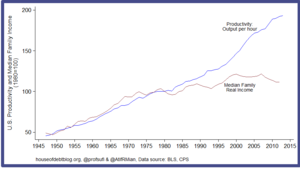 The chart shows that while U.S. productivity has continued to soar, median family income has stagnated. Who gets the fruits of this labor? Shareholders and corporate executives, like those of Wal-Mart.