You might assume walnut grower Mike Poindexter would be regretting his vote for Donald Trump.

Since the inauguration, immigration officials have raided his Selma, Calif., office and China has slapped tariffs on his walnuts to retaliate against President Trump’s protection of steel, aluminum and manufacturing.

But you’d be dead wrong. Like many other farmers in the rural and conservative San Joaquin Valley, Poindexter, 46, is holding as steadfast as his trees.

“It’s not about sticking through thick and thin,” he said. “What is our other option? In California, they’re not willing to back [Sen. Dianne] Feinstein because she’s not liberal enough. They don’t have anyone who’s palatable to us.”

So, if Trump thinks a trade war will improve the market for U.S. goods, so be it, Poindexter figures. “You know what? The Cold War affected us, too,” he said. “It’s not going to be free to win this war, but it may be worth it. I don’t think you’ll have farmers go out and vote for Democrats over tariffs.”

Poindexter’s stoicism echoes across the farms of the San Joaquin Valley, where rural and suburban voters strongly supported Trump and where they regularly send Republicans to the House of Representatives. House Majority Leader Kevin McCarthy of Bakersfield is in his sixth term, and fellow Republican Devin Nunes, farther north in Tulare, is in his seventh.

“If I’ve gotta take a few bullets getting caught up in the cross-fire, but after four years or eight years — however long he spends in office — we’re on a better trajectory as a country, then it’s all parred up,” said Matt Fisher, a fourth-generation citrus grower in Arvin, near Bakersfield. “I did my part, so to speak.”

Jeff Bortolussi grows half a dozen fruit crops at the eastern edge of Kingsburg, where he contributed to his precinct’s 70% tally for Trump.

He lives in the house where he grew up, and eagerly invites a visitor on a driving tour around a mile-square box of country roads to show off the spring crop: peaches and nectarines the size of a baby’s fist, almond and walnuts still too small to see, reedy blueberry bushes, leafy grape vines and trees pregnant with apples, pomegranates, clementines, persimmons and figs.

It’s that kind of diversity — California grows more than 200 crops — that could soften the impact of tariffs on the state. And it’s what differentiates California’s $45-billion agriculture industry from frustrated farmers in the Midwest, who heavily depend on a soy crop that faces tariffs of 25%. (A tariff raises the price for Chinese importers, making the U.S. crop less competitive.)

Bortolussi is as patient about politics as he is with his crops.

“A lot of this stuff needs to play out,” he said. “I think a lot of it is posturing, and his way of communicating, his ‘art of the deal.’ We really don’t know what’s going on.”

Even almonds, California’s second-largest agricultural export to China, may not suffer from tariffs as much as first thought, Bortolussi says. “The almond crop this year is going to be a little off, because it got a little freeze,” he said. “So, if the tariffs are going to affect almonds, this may be the year when it will have less effect.”

Last year, California sold $1.1 billion worth of nuts — almonds, walnuts and pistachios — to China, its third-largest foreign customer, according to the state Department of Food and Agriculture. China also bought more than $240 million in fresh citrus and table grapes from California in 2016, according to the department's data.

Bortolussi confided what might be a political heresy here: Agriculture “seems to do better under Democrats, generally,” he said. “The dollar is weaker, exports are higher and there’s more giveaway programs.”

Democrats also tend to be more laissez faire on immigration, he added, which should help farmers with their labor shortage. Still, he counters, regulation sprouts like weeds when Democrats are in power, and candidates aren’t getting any less liberal in California.

“We’ll see,” Bortolussi said of voting for Trump again. “I can’t see myself voting for a Bernie Sanders.”

Mention Bernie to Poindexter and he spits out “Game of Thrones” villain metaphors. “Bernie Sanders — you think I’m going to support him, the High Sparrow? He’s the High Sparrow.”

That magnified fear of liberal zealotry — founded or not — explains a lot of what keeps agriculture in Trump’s fold. Politics is local, and nothing is more local than planting crops in the ground.

In the last general election, the Central Valley map was an ocean of pink dotted with blue archipelagos, mostly in urban areas — similar to the urban/rural divide that marked Trump’s electoral victory. 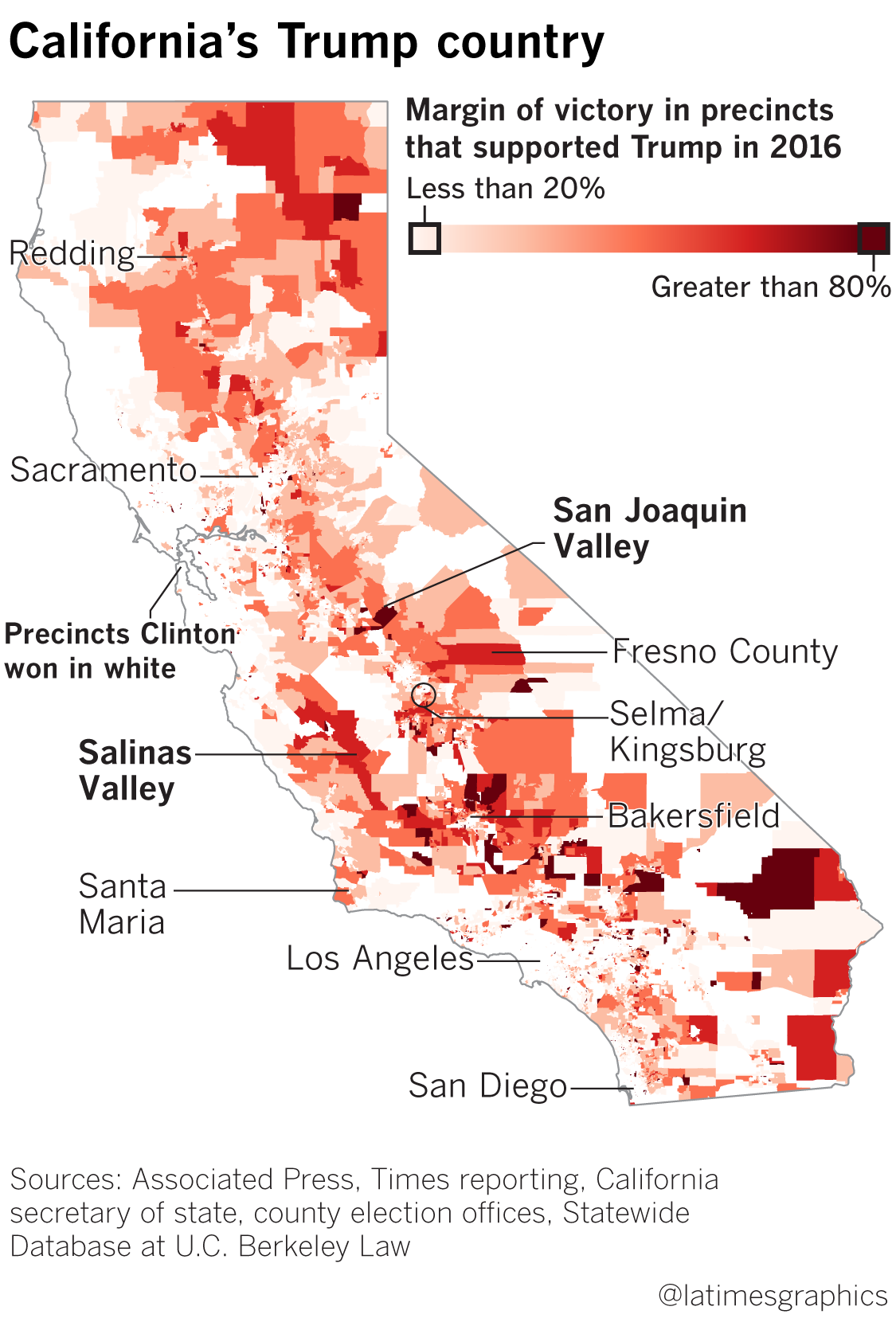 A March poll showed Trump holds a 45% approval rating here, higher than his national ranking at the time, and second in California only to the approval rate in Orange and San Diego counties, said Dean Bonner, associate survey director of the Public Policy Institute of California.

And 51% of likely voters in the Central Valley, including Sacramento and the Delta area, said they would elect Republicans to Congress, while 44% said they would vote Democratic, Bonner said.

So, if the Chinese government aims to undermine Trump’s constituency, growers here are scratching their heads about why it chose them. The state’s voters haven’t helped a Republican win the White House since George H.W. Bush in 1988 — the last year voters sent a Republican, Pete Wilson, to the Senate.

California’s top export market is Europe. Notably absent from the state’s crops are major commodities like soy, a vital part of Midwestern agriculture and by far the top U.S. agricultural export to China.

“Soybean growers aren’t too happy in the Midwest,” Bortolussi said. “Is part of that politically motivated by China? There are a lot of elections in the Midwest.”

Growers have complained that the Trump administration’s stepped-up actions against undocumented immigrants scare away workers, a view Agriculture Secretary Sonny Perdue has relayed to the White House. In February, federal immigration agents arrested 232 immigrants in the Central Valley, most of them with criminal convictions. Immigration officials also audited work documents on file at Central Valley packing houses, as well as hundreds of other businesses statewide.

But Poindexter blames state Democratic politicians for drawing the attention of federal immigration authorities by actively opposing Trump’s efforts to fortify the border and deport immigrants with criminal records — partly through the “sanctuary state” policy, in which local authorities opt not to cooperate with immigration enforcers.

“They’re picking a fight with the federal government,” he said. “You have to ask, who’s instigating here?”

Federal authorities first audited Poindexter’s paperwork in 2008. He wound up letting go 70% of his workforce, including both parents of three U.S.-born children.

Poindexter held up a silver-colored pen the workers gave him, and choked up. “They didn’t have a lot of money; they lost their jobs, but they got me a nice pen,” he said. Before they left, he tried to gather them for a group photo. “Most of them didn’t show. They thought they were being rounded up.”

Left, A world map in Mike Poindexter’s office shows some of the places he has traveled in China. Right, Mike Poindexter holds a pen given to him by workers he was forced to lay off because of their immigration status. (Tomas Ovalle / For The Times)

Poindexter has no idea what became of those workers, but he suspects they didn’t go back to Mexico. “They just got jobs at my competitors, or other places.”

Immigration and Customs Enforcement officials revisited him in February, justifying the return as a follow-up on previous offenders. That only makes Poindexter angrier.

“Tariffs affect all of our industry — a paperwork raid affects only me,” he said. “The first time they did it, how many walnut packers did they raid? One. They just walked into my company, grabbed a grenade, pulled out the pin, threw it in the door and said, there, that’ll teach the whole industry.’ And then 10 years later: ‘Hey let’s do it to Mike again.’”

Poindexter lost at least a dozen workers who scattered at word of the latest audit.

It has been hard enough to find workers in an area where so many crops ripen at overlapping times. Immigrants residing in the U.S. are aging out of agriculture, while Mexico’s birth rate has plummeted. Fewer young men are crossing the border, either because it’s too difficult and expensive, or because they have other options at home.

Growers and labor contractors from different regions of the state are locked in a wage war, and they have opted to recruit record numbers of agricultural guest workers under the H-2A visa program to fill jobs that native-born Americans don’t appear eager to take.

“And if I pay more the illegals won’t show up?” Poindexter said. “You think people without documents only look for [low]-paying jobs? They’ll show up for those, too.”

Poindexter is persistent — he admits to a stubborn streak dating to childhood. He has chosen and stuck with the family business despite the fact that he’s allergic to its product; the trees, leaves, and the 50 million pounds of nuts he processes annually literally bring him to tears.

So it’s no surprise that Poindexter has hounded federal officials for the results of their audit, which could cost him tens of thousands of dollars in fines. Repeated calls render the same answer: There are eight other audit reviews ahead of you.

“Now what do I do? Do I trim my staff and have them come back and say, ‘Now we want you to get rid of all these people you kept?’” he asked.

“Just give me the damn answers.… I’m still waiting.”

Plenty could change by harvest, they know. Trump has promised he’ll get back to growers and make it up to them. In the meantime, there’s Syria, North Korea, Stormy Daniels and God only knows what.

“I’m the fourth generation doing this,” Fisher says. “When you look back at all the presidents and all the Congresses and everybody we’ve weathered, it’s like: OK, here we are again.

“It’s like more of the same,” he said. “We take a long view in agriculture. We have to.”