NTSB: Truck appears to have traveled down tracks prior to crash

According to preliminary information from the NTSB, the truck involved in the crash was not stuck on the tracks, as previously thought.

“It was not stuck, it was not bottomed out on the track or something like that,” said Robert Sumwalt, a board member with the NTSB, at a press conference late Tuesday.

It appears the truck was traveling down the railroad tracks just prior to the crash, Sumwalt said.

“We’re very concerned about that, we’re very interested in it.”

Engineer’s reaction and call for witnesses

How did engineer respond when he saw a truck on the tracks? Headlights were on bright, emergency brake had been pulled, @NTSB says. — Laura J. Nelson (@laura_nelson) February 25, 2015

Anyone who witnessed the #MetrolinkCrash should contact the @NTSB via email: witness@ntsb.gov. — Laura J. Nelson (@laura_nelson) February 25, 2015

More from @NTSB on truck movement in Metrolink crash: Train hit the truck to the WEST of the grade crossing, pushed the truck 300 feet east. — Laura J. Nelson (@laura_nelson) February 25, 2015

. @NTSB will review video showing what was in front of the Metrolink train at time of the crash, and another that recorded inside the cab. — Laura J. Nelson (@laura_nelson) February 25, 2015

Robert Sumwalt, who has served on the National Transportation Safety Board since 2006, is scheduled to speak to the press at a news conference tonight.

Sumwalt has a background in aviation and worked as a pilot for more than three decades, according to his bio.

He is pictured here at the scene of a deadly train derailment in New York earlier this month. 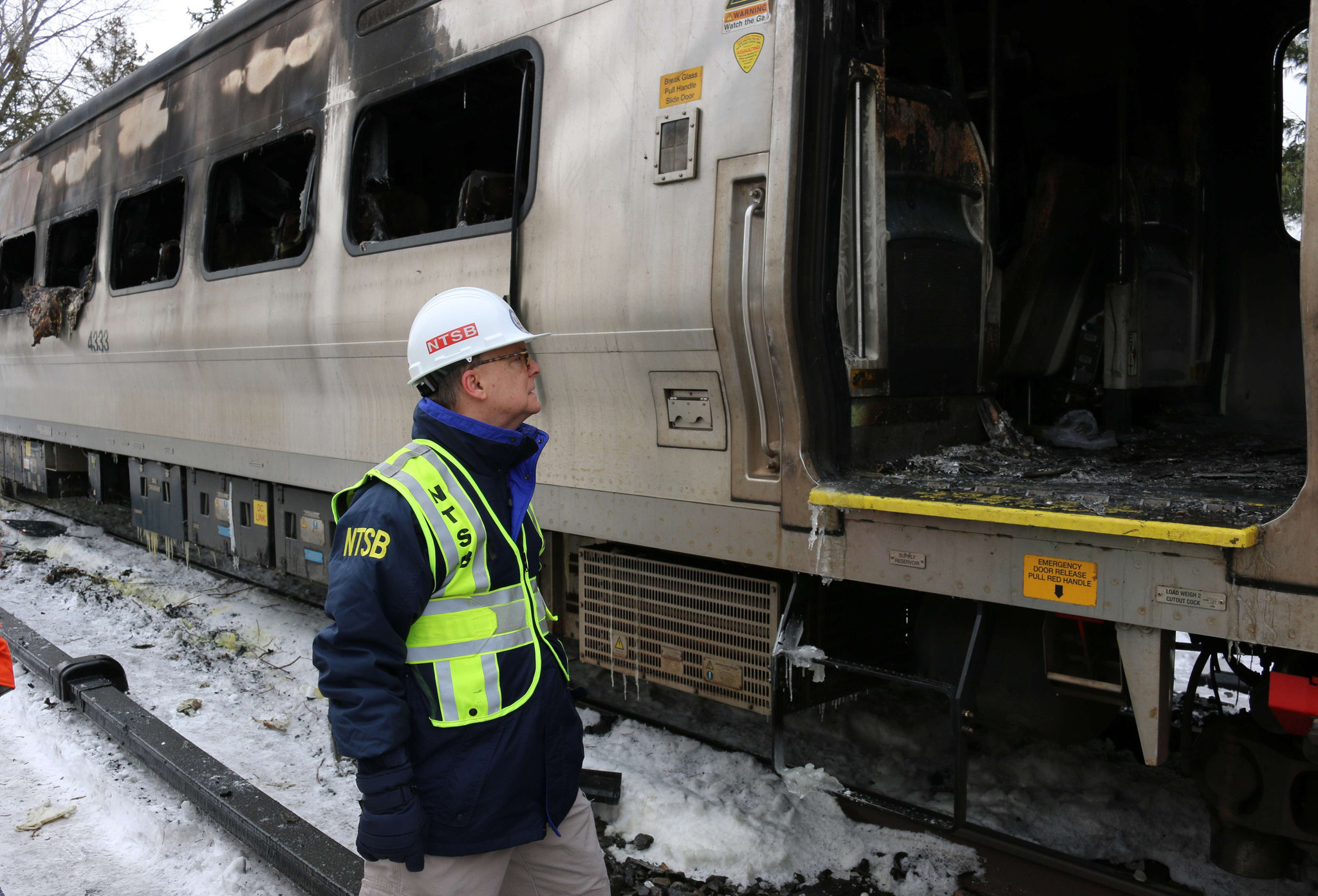 Wife of truck driver: ‘It’s not his fault’

The wife of the driver whose truck collided early Tuesday with a Metrolink commuter train in Oxnard spoke out Tuesday evening, telling the Los Angeles Times that explosive collision that followed was not her husband’s fault.

Lucila Sanchez said her husband is a mechanic and was heading to a job site in Oxnard when his truck unexpectedly stalled on the tracks. She said he was unable to start the engine and -- with the train fast approaching -- jumped out of his truck.

“It’s not his fault,” she said. “It’s the truck company’s fault. They gave him a truck that doesn’t work.”

NTSB Go-Team has arrived in Oxnard and will be heading to the accident scene shortly. #Oxnard . — NTSB (@NTSB) February 25, 2015

‘We can only speculate at this point’

Jose Alejandro Sanchez-Ramirez has been arrested for felony hit and run after this morning’s Metrolink crash.

An officer found Sanchez-Ramirez 1.6 miles south of the wreck -- “a substantial distance, given the circumstances,” said Jason Benites, assistant chief of the Oxnard Police Department.

Sanchez-Ramirez, who officials said has a valid Arizona commercial driver’s license, was speaking with detectives at Oxnard Police Department on Tuesday evening.

“We can only speculate at this point -- in order to get past that barrier, the signal had to be up. He could have been there for quite some time,” Benites said.

The truck got stuck on the tracks and the train “collided with it in a head-on fashion,” he said.

When asked about whether Sanchez-Ramirez was driving under the influence, Benites said, “I can tell you that we are looking at that angle.”

Vehicle involved in crash was a work truck

The truck had welding equipment in the trailer. It was a work vehicle. Authorities not releasing name of company. #MetrolinkCrash — Sarah Parvini (@ParviniParlance) February 25, 2015

Driver is currently in custody. He does have a valid Arizona driver’s license. #metrolinkcrash — Sarah Parvini (@ParviniParlance) February 25, 2015

Driver is currently in custody. He does have a valid Arizona driver’s license. #metrolinkcrash — Sarah Parvini (@ParviniParlance) February 25, 2015

And an update on the critically injured train operator:

Workers put this derailed car (far left) back on the tracks. Rolled it down some. Not sure where it’s being taken. pic.twitter.com/RmYLYnYfaz — Sarah Parvini (@ParviniParlance) February 25, 2015

The creak of cranes shifting the overturned Metrolink cars echoed in the air. Two cranes lifted one car from the crash site, placing it back onto the tracks and rolling it away. Another remained on its side, while workers stabilized a third silver car, left slanted and derailed.

More overhead shots of the aftermath 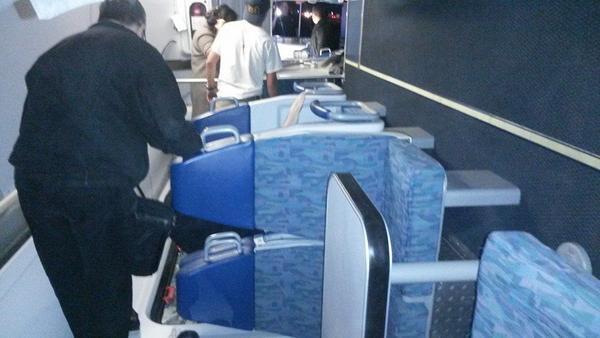 Ted Maloney, 59, of Oxnard, was driving to work in Ventura when he heard the train horn.

He usually takes the same route to work and always sees the same train. But this time it was different.

“[The train engineer] just laid into the horn,” Maloney said. “I looked up and it was just a horrendous ball of fire.”

As he ran toward two train cars flipped on their sides, he was met by two farm workers from a nearby strawberry field.

They helped Maloney, who has an artificial knee, climb into one of the trains.

“Is anybody bleeding?” he screamed.

A passenger yelled back, “Yes, this lady’s bleeding.”

Maloney searched for a first aid kit, but couldn’t find one. So, he grabbed a sweater, placed it under her head and held her hand.

The Metrolink operator is the most critically injured of the six train passengers taken to the hospital, said Bryan Wong, chief medical officer for Ventura County Medical Center.

“He has been moved into our ICU and is being worked on actively to stabilize his injuries,"Wong said.

His son was flown in from the Temucula area and is now with him. He suffered chest injuries.

“Really the next 24 to 48 hours will give us the best sense of how he will recover from his injuries. Certainly our hope is that his body rallies and his heart and lungs start to turn the corner,” Wong said.

He has not been operated on and when he arrived at the hospital he was communicative. Wong said he’s not expected to undergo surgery.

“At this point we’re still moment to moment,” Wong said.

Last crash at the crossing was in 2014

The last crash at this crossing was in June when two people died after a southbound car collided with a train.

There is a proposal to build a bridge at this crossing. It’s been in the works for several years.

Mayor: We have a number of RR crossings where it is possible bridges will be constructed--this is a site being considered for that. — Sarah Parvini (@ParviniParlance) February 24, 2015

A wrong turn, then a crash

The derailment of a five-car Metrolink train headed to downtown Los Angeles from East Ventura County was triggered by a produce truck driver who turned onto the railroad tracks instead of the street and got his vehicle stuck, Oxnard police said.

The driver, a 54-year-old Arizona native, was hauling a 12-foot trailer and was southbound on Rice Avenue and wanted to turn right onto 5th Street when he turned right onto the railroad tracks instead and got stuck, said Oxnard police assistant chief Jason Benites.

The truck, which appeared to be an early 2000s-model Ford F-150, sat there and was hit by the train, which then derailed and sent three of its five cars spilling onto the nearby gravel and adjacent street. Authorities said 28 people were injured, four of them critically including the train’s engineer.

While authorities rushed to the scene to help the injured, an Oxnard police officer found the driver more than a mile away from the crash, Benites said. The driver “appeared disoriented” and was taken to a local hospital for observation. The driver is cooperating with police, Benites said.

NTSB is en route to the scene and will be the lead agency on this investigation. #metrolinkcrash — Sarah Parvini (@ParviniParlance) February 24, 2015

Police say they “believe at this time” that the produce truck, driven by a 54-year-old Arizona man, got stuck on the tracks. #Metrolinkcrash — Laura J. Nelson (@laura_nelson) February 24, 2015 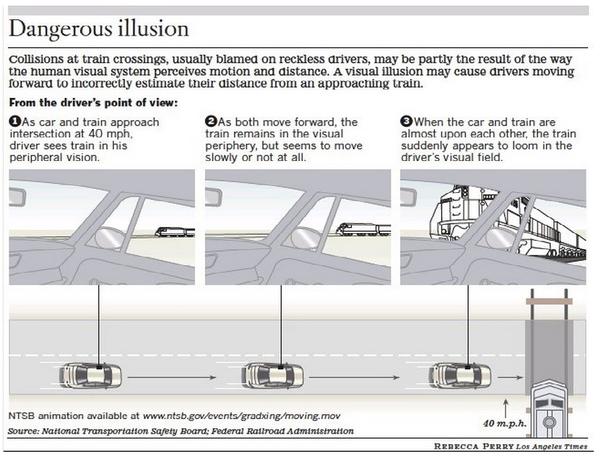 In a 2003 Column One, The Times looked at why drivers are so often blamed for carelessness when trains and cars collide and found the issue more complicated than poor driving. Here’s an excerpt:

Scientists say that many of these accidents are caused by deadly misperceptions, the visual and behavioral quirks known to science but not to ordinary drivers. And making rail-crossing encounters even more treacherous are train and crossing designs that fail to take into account how people perceive and behave.

The most dangerous crossing in Ventura County

The Oxnard intersection where the #MetrolinkCrash occurred is the most dangerous in Ventura County, the feds say. https://t.co/6ug9Ehzj6p — Laura J. Nelson (@laura_nelson) February 24, 2015

The data indicate the Rice Avenue crossing had more collisions than any other Ventura County crossing in the 2009-2013 period.

Officials have talked about making some of these crossings safer, in some cases with extra barriers. But building more grade separations has been a slow process because such projects are expensive.

The Rice crossing was one of the places officials have talked about building a grade separation.