Thousands march in L.A. as part of nationwide call to raise minimum wage

Several thousand low-wage workers and their supporters marched through downtown Los Angeles to drum beats and whistles Tuesday afternoon calling for a $15 minimum wage and a union.

The march was part of a nationwide "Fight for 15" protest in which workers from 270 cities were expected to walk out in what organizers hoped would be the fast-food industry's largest ever strike. A major backer of the Fight for 15 campaign is the Service Employees International Union, which is trying to organize fast-food workers in Los Angeles.

The group in Los Angeles gathered at a local McDonald's before marching to City Hall. Home care workers and child care workers marched alongside fast-food employees, union members and community organizations. The crowd gathered at the steps of City Hall and spilled onto Spring Street. Huge green and purple balloons with $15 painted on the side soared above the group.

The L.A. City Council and L.A. County Board of Supervisors have already approved a law that would raise the minimum wage to $15 an hour by 2020. Workers in L.A. marched to show solidarity with workers in other cities that do not have a $15 minimum wage, as well as to call for a union.

Frank Trejo, 22, said a $15 minimum wage would help him buy a car. He currently walks the 1.4-mile distance from his home in Pasadena to the local McDonald's where he works.

His paycheck helps to pay the bills at his mother's house, where he lives with her and his brother.

He was scheduled to work a 4 a.m.-to-12 p.m. shift at McDonald's on Tuesday but did not show up for work so he could take part in the protest.

"It's hard to save when you have to spend so much," Trejo said of living in the Los Angeles area.

Joanna Morales, 24, has worked at the McDonald's at Rodeo Road and South La Brea Avenue in the Baldwin Hills/Crenshaw neighborhood for two years. She said a $15 minimum wage would give her independence since she currently lives at home with family.

"It would give security and stability," she said. "I would also like to go back to school."

Morales started college but never finished because she gave birth to her now 3 1/2-year-old son. She had wanted to be a medical assistant at the time and still hopes to work in the field one day.

"It was either buy diapers and feed him or go to school," she said.

In a statement, Oak Brook, Ill.-based McDonald's pointed to its decision to raise the minimum wage for workers at company-owned stores starting in July. The wage increase, which affected more than 90,000 workers, but not employees at franchises, boosted pay to at least $1 above local hourly minimum wages.

"McDonald's and our independent franchisees support paying our valued employees fair wages aligned with a competitive marketplace," the company said in a statement. "We believe that any minimum-wage increase should be implemented over time so that the impact on owners of small and medium-sized businesses -- like the ones who own and operate the majority of our restaurants -- is manageable."

Here are some of the images of the strikes and protests across the country. 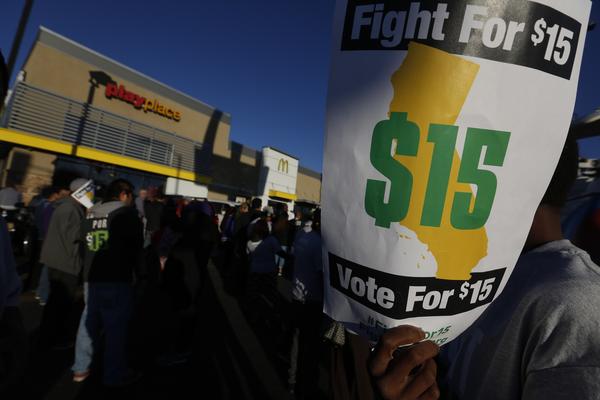 Protesters and activists carry signs and chant for higher wages in the parking lot at a McDonald's in South Los Angeles. (Mark Boster/Los Angeles Times) 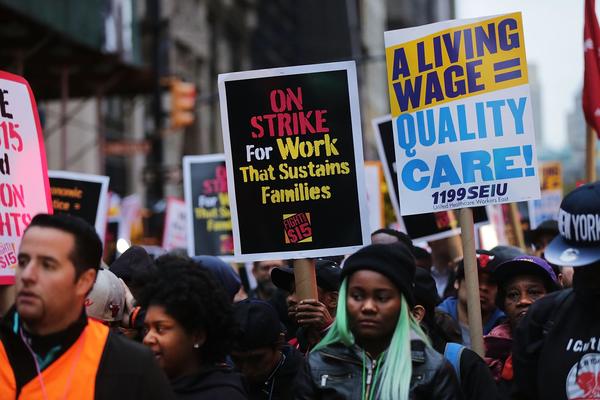 Workers and supporters protest for a $15 an hour minimum wage on Nov. 10 in New York. (Spencer Platt / Getty Images) 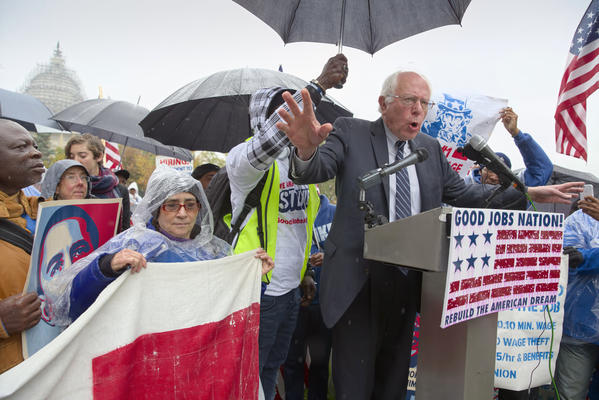 Senator and Democratic presidential candidate Bernie Sanders joins workers, some of whom work as cooks and cleaners at the Capitol, at a rally in Washington. (J. Scott Applewhite / Associated Press)

Democratic presidential hopefuls Bernie Sanders and Hillary Clinton both Tweeted their support of the protesters.