Jim and Pam forever! Jenna Fischer has admitted that her love for costar John Krasinski was real during their time on NBC's "The Office."

Fischer, who appeared on Bravo's "Watch What Happens Live!" on Wednesday to promote her new NBC series "You, Me and the Apocalypse," shared that her chemistry with her costar wasn't merely good acting.

"John and I have real chemistry," she told a caller. "There's like a real part of me that is Pam and a real part of him that's Jim. And those parts of us were genuinely in love with one another."

The Dunder-Mifflin pranksters-turned-parents, who set relationship goals for people in and out of the workplace, spent nine seasons tugging on our heartstrings with their prolonged courtship, subsequent marriage and foray into parenthood. However, Fischer also said that despite their chemistry, she and her costar weren't totally compatible. 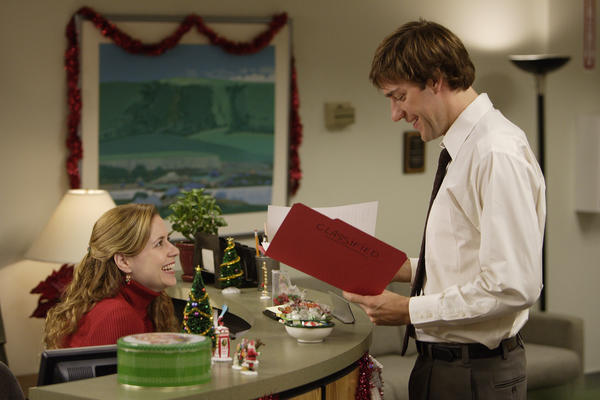 "In real life, we aren't totally Pam and totally Jim. So in real life, we're not like the perfect match," the 41-year-old said. "It's a really complicated thing. He was like a type of spouse that I had for a long time. He was my partner and we will always be close because of it."

Incidentally, the actors both got married in July 2010 — but not to each other. Fischer wed writer-director Lee Kirk in Malibu on July 3 and Krasinski married "Sicario" star Emily Blunt in Italy about a week later.

The mother of two also dished to host Andy Cohen and his viewers that Krasinski was the "most fun" on set and said she approved of his new buff physique for the Benghazi drama "13 Hours."

The actress spilled more tea about her former costars too. Watch it here.