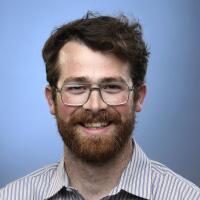 Eben McCue created animated content for the Los Angeles Times. McCue, a motion graphics artist, previously worked in Vancouver on a television series. A growing interest in infographics drew him to The Times, where he explored the potential of animated journalism. McCue graduated from Massachusetts College of Art in 2013 with a BFA in animation; he left The Times in February 2017.