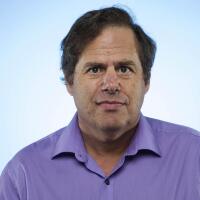 Mike Boehm is a former arts reporter and pop music critic for the Los Angeles Times; he left in 2015. He also has covered police, courts, government and politics and general news and features for the Danbury (Conn.) News-Times, Miami Herald and Providence Journal. He grew up in Connecticut and has degrees from Yale University and the Columbia University Graduate School of Journalism. Lifelong commitments include his family and the New York Giants, Mets and Knickerbockers. Boehm died in May 2019.