A search at Mount Zion for the tomb of a prominent Yiddish author reveals a dystopian landscape of toppled tombstones at a site no one seems to own.

A search at Mount Zion, an East L.A. cemetery, for the tomb of a prominent Yiddish author reveals a dystopian landscape of toppled tombstones at a site no one seems to own. 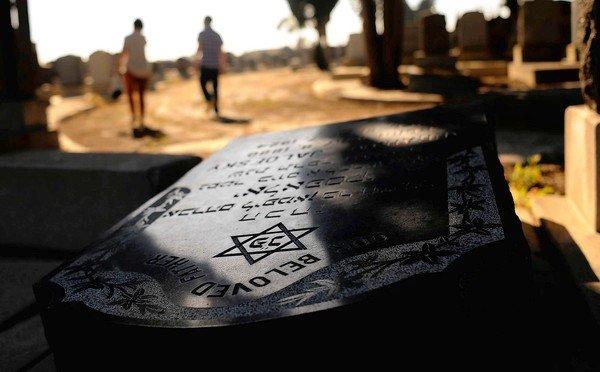 One of the many toppled headstones at the East L.A. cemetery. (Wally Skalij / Los Angeles Times) More photos

A search at Mount Zion for the tomb of a prominent Yiddish author reveals a dystopian landscape of toppled tombstones that no one seems to own.

The black gates of Mount Zion are chained. A sign stamped on a wall of bright bougainvillea on Downey Road asks visitors to call a neighboring graveyard if they want to go in. The phone number doesn’t exist anymore.

Robert Adler-Peckerar stood at the entrance of the Jewish cemetery in East L.A., the downtown skyline behind him, the rush of the 710 and 5 freeways around him. It was a Sunday, and he was on a quest to find the grave of a man born on that day more than 100 years before.

He tracked down a caretaker next door who led him through a fence into Mount Zion. Once inside, he saw dozens of children’s graves closely spaced. Tiny and delicate, several headstones had been knocked down.

Walking down a winding asphalt road scabbed with dirt, weeds and a shag carpet of dried cypress leaves, the 38-year-old saw that hundreds of tombstones were on the ground, some lying like small, toppled Stonehenges.

On one tomb, a vandal scrawled a cryptic graffiti: "Here lies Horse. RIP."

An hour later, he finally found what he was looking for: the grave of Lamed Shapiro, a writer of gruesomely dark stories of pogroms in Eastern Europe who died a pauper in Los Angeles in 1948.

Shapiro’s tombstone, in the shape of an open book, had rolled to the ground like a decapitated head but, by a stroke of fortune, landed face-up. 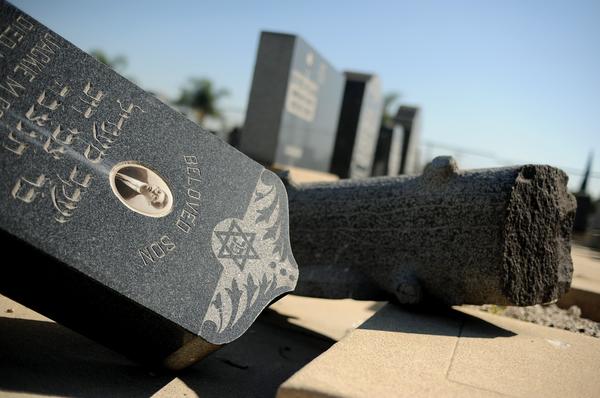 "This is what happened to one of the greatest Yiddish writers in L.A.," said Adler-Peckerar, executive director of Yiddishkayt, an organization dedicated to preserving the Yiddish language and culture. "I'd never seen a cemetery like this in America."

He had gone looking for the grave of a man who had become "unbalanced" by the end of his days. He ended up finding a place the writer might have understood. Both, in their own way, had been left behind.

The Eastside neighborhoods of East L.A. and Boyle Heights have long served as an archive of Los Angeles’ multicultural history — Ellis Islands for transplants from the East and across the Pacific — and in more recent years, from Mexico.

Nowhere is this more evident than in their graveyards.

On 3rd Street off Eastern Avenue, there's the pristine Serbian Cemetery. On the 1st Street side of that graveyard is the Chinese Cemetery. The sprawling Evergreen Cemetery in Boyle Heights is the final home of some of the most familiar family names in Los Angeles history, including the Lankershims and the Van Nuyses.

On Whittier Boulevard in East L.A., Home of Peace is a large Jewish cemetery with Roman columns and beautiful mausoleums for noted rabbis. Among the well-known buried there are two of the Three Stooges — Curly and Shemp Howard, and Jack Warner, the film executive who co-founded Warner Bros.

Earlier this year, Eddie Goldstein, perhaps the last Jew to be born and live in Boyle Heights his whole life, was buried at Home of Peace.

And then there's Mount Zion, a graveyard with a hard-luck history. 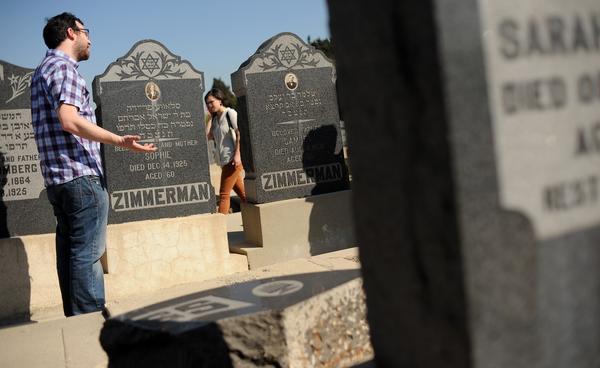 It was opened in 1916 by a burial society dedicated to provide free burials for poor Jews. Where other cemeteries featured vast expanses of trimmed grass, handsome columns and statuary, Mount Zion was mostly concrete and dirt.

The cemetery rarely made the news, for good or bad, but in 1932 it did when a Hyman Bobroff, age 50, shot himself in the head inside Mount Zion. A second bullet pierced his heart, apparently the result of a reflexive movement of his gun hand after the first pierced his skull.

A year before, the cemetery hosted the funeral for a murdered "alcohol broker."

"No big shots were at the funeral," it was reported in the Los Angeles Times, "although a number of lesser lights from the underworld appeared both at the undertaking parlors and the cemetery."

Born in Ukraine in 1878, Lamed Shapiro became known for stories bathed in hyper-violent acts of murder, rape and even cannibalism. He wrote most of his tales after immigrating to the U.S. in 1905.

Despite his reputation for graphic violence, there was a spare beauty to his writing, some scholars said, and not all of his stories ended in bloodshed. But in one blog, a writer described reading a Shapiro short about a boy and his dog and waiting with dread for something awful to befall the dog. How could it not, after the other stories he had read? He was relieved, he wrote, "to watch the dog run off, never to return." 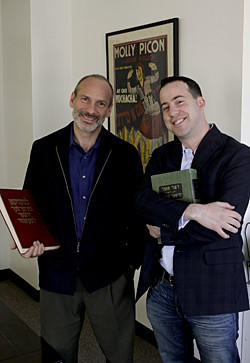 By the time Shapiro died in 1948 in Los Angeles, Yiddish was becoming a marginalized language as Jews sought to assimilate, said David Shneer, a professor of Jewish history at the University of Colorado. Shapiro died poor, alcoholic and past Yiddish literature's heyday.

"It's terrible to say it, but he didn't die soon enough," he said. "It doesn't surprise me that a man who was clearly depressed most of his life ... was buried in a cemetery that is in ruins."

Below the sign providing visitors with a defunct phone number is another one that reads: "This property is maintained through contributions to the Mt. Zion Cemetery Fund & by the generosity of the Jewish Federation Council."

Richard George, the director of the Home of Peace cemetery next door, hops on a golf cart and drives toward the forgotten little cemetery just over a fence.

Although the Jewish population all but disappeared from the Eastside, there are enough ties to the neighborhood to keep Home of Peace moderately busy with burials, about 100 a year. Mount Zion hasn't been an active cemetery in years. The last burial there was about six years ago, he said.

Home of Peace and the Jewish Federation agreed to look after the cemetery many years ago, but neither organization knows who actually owns the property, and county records are inconclusive, listing the name of the apparently defunct burial society.

George said the federation pays Home of Peace about $1,000 a month to do basic maintenance, some of which involves killing weeds that grow rampant. About two years ago, he said, the federation paid to cut down cypress trees that spread debris throughout the cemetery.

Most of the fallen headstones were knocked over by vandals, though there’s no evidence anti-Semitism is a motivation.

Jay Sanderson, the president of the Jewish Federation, said that in June 1969, the federation received a letter from the burial society that founded Mount Zion stating that the organization would no longer continue operating the cemetery.

This cemetery needs money help. I'm personally upset when I walk in here. It's just shameful."

— Richard George,
the director of the Home of Peace cemetery next door to Mount Zion

Sanderson said a title search for the property found that it belonged to the Masonic Cemetery Assn., but that turned out to be a dissolved corporation. In 1974, the Jewish Federation reached an agreement with Home of Peace to pay the monthly fee to take care of Mount Zion.

In 1987, the Whittier Narrows earthquake devastated the cemetery and four years later, the federation sent a letter to all known living heirs of Mount Zion’s dead.

"They were almost all elderly people living on fixed incomes," Sanderson said. "Since then, they've all passed away.... I don't know what happens when no one owns a cemetery. I don’t know what you do with a cemetery like that."

The federation, a philanthropic nonprofit group with more than $50 million in revenue, according to the most recent tax records, funds scores of programs, including supporting schools, universities, Jewish social service organizations, the restoration of a shul in Boyle Heights and aid to poor Holocaust survivors.

"It's an interesting moral dilemma if you think about it," he said. "We try to do the best that we can do. We can do more, yes. But the question is, what are we not going to be doing if we do that?

"This is a cemetery in need most people don't know exists," Sanderson said. "It's a cemetery that no longer really belongs to anyone."

Two days after his first visit to Mount Zion, Adler-Peckerar returned. A Home of Peace caretaker rode a dirt bike to meet him at the gate. Throughout the cemetery, rounded, oval photographs set in enamel lay on the ground. The caretaker, Lupe Munoz, said vandals probably used rocks or screwdrivers to pry them off. 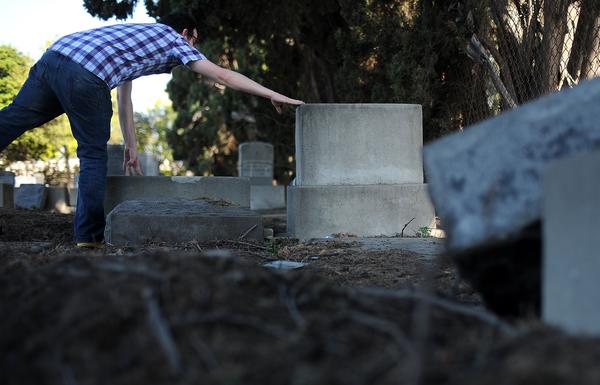 Loved ones did visit from time to time, he said, but not too many anymore.

This time, Adler-Peckerar paid closer attention to the messages on the monuments. There was obvious love here once. One stone featured a 27-year-old man, "our beloved son," with a violin on his shoulder. Someone’s daughter was described as a "beautiful maiden." One World War II pilot was described as a hero who was "blown to pieces in flame at the age of 26."

Shapiro’s own gravestone proclaims: "Lamed Levi Shapiro, Author of the Yiddishe Melukhe" — "The Jewish Empire," one of his works.

Next to it, his wife’s grave marker lay face-down in the dirt.

"There’s a cemetery in New York that’s like the pantheon of Yiddish writers," Adler-Peckerar said. "This is the complete opposite... This is what happens when people are left behind."

On Dapper Day, Disneyland is the nattiest place on Earth

Kinder and gentler: The rumors about Perez Hilton are true