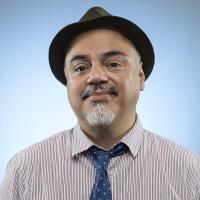 Hector Tobar worked at the Los Angeles Times for two decades: as a city reporter, national and foreign correspondent, columnist and with the books and culture department. He left in September 2014. Tobar was The Times’ bureau chief in Mexico City and Buenos Aires and was part of the reporting team that won a Pulitzer Prize for coverage of the 1992 L.A. riots. He has also worked as features editor at the LA Weekly and as editor of the bilingual San Francisco magazine El Tecolote. Tobar has an MFA in creative writing from UC Irvine and studied at UC Santa Cruz and at the Universidad Nacional Autonoma de Mexico in Mexico City. The Los Angeles-born writer is the author of three books. His most recent novel, “The Barbarian Nurseries,” was named a New York Times Notable Book in 2011 and also won the California Book Award Gold Medal for Fiction. He’s married, the father of three children and the son of Guatemalan immigrants.