Newsletter: Water and Power: Taps back on, for some

Little help: El Niño is not coming to California’s rescue. An intense storm system could bring copious amounts of rain to the state, but it likely won’t be enough to make up for years of drought. And new research suggests California should just get used to more extreme droughts. “The state’s water rights, infrastructure and management were designed for an old climate, one that no longer exists.”

Lifting restrictions: State water officials are easing restrictions on some of the state’s most senior water right holders. Users whose rights date from 1903 to 1913 may once again divert water from the Sacramento and Feather River watersheds. “Some parties are going to be glad to see today’s action, and unfortunately, because the drought is continuing, today’s action is quite limited,” said Kathy Mrowka, the state board's program manager for water rights enforcement.

Turf rebates: Before Orange County capped how much money businesses could receive for ripping out their lawns, one country club received a $1.9-million rebate. It went to the El Niguel Country Club, and its rebate represented 10% of the total amount paid out to businesses and homeowners. The highest residential rebate went for $32,000.

Lawn benefits: As long as you have a lawn, you may as well water it. That’s according to two experts on irrigation. Urban landscapes can provide dust control, wildlife habitats and cooler temperatures. “Lawns have of course been especially singled out as water-wasting culprits and borne the brunt of the anti-water scorn — but this, too, is unscientific.”

Hot in here: Urban heat islands are real. In the summer, some parts of L.A. experience a 19-degree increase in the temperature because of the heat absorbed into the asphalt and concrete.

Animal populations: Birds on the Channel Islands aren’t reproducing this year, and experts believe that’s somehow related to the drought. The Island fox population has started breeding again, thanks to a very small uptick in water available on the islands. “We’ve had a little bit of precipitation and I think it takes very little precipitation to break the drought on the islands, at least as far as island foxes go,” said Tim Coonan, a National Park Service biologist.

Still or sparkling: California’s extreme weather conditions didn’t make it into last week’s Republican presidential debate in Simi Valley. Candidate Marco Rubio, however, did get in one joke. “I’m aware that California has a drought, so I made sure I brought my own water,” he said, making a reference to the awkward water sip he took during the GOP rebuttal to President Obama's 2013 State of the Union address.

“No one could have anticipated the severity of this drought, but this shouldn’t be a surprise to anyone, and there definitely should have been more preparation taking place.”

“As a farmer, you have to be resilient. There are a lot of things out of your control, from the weather to the market prices.”

-- Ed Zuckerman of Delta Bluegrass Co. on being a sod farmer during a drought. 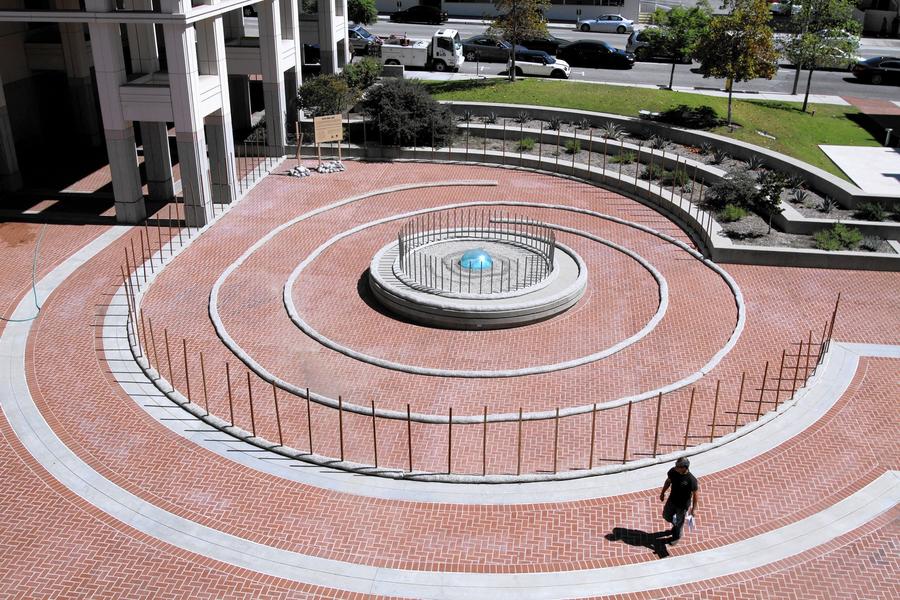 A new art installation called "Water Finds a Way" at Perkins Plaza in Glendale serves as a stark reminder of the drought. (Raul Roa / Glendale News-Press)

Even in a drought, mature trees need water. The best way to water these trees is slowly. The Sacramento Tree Foundation recommends placing an inch-high can, like one for tuna or cat food, next to your tree. Turn on the sprinklers and then shut them off once that can is full.

How do you know it’s time to water your tree? Check the soil around the tree.

Thursday: The L.A. Department of Water and Power will host a public meeting in the Sunland-Tujunga community to discuss rate increases.