In a cycle of life and fine dining, Bob Combs turns free leftovers into slop for his hogs, many of which eventually land back on Las Vegas casinos’ buffets.

Nevada pig farmer relishes role as recycler: In a cycle of life and fine dining, Bob Combs turns free leftovers into slop for his hogs, many of which eventually land back on Las Vegas casinos' buffets. 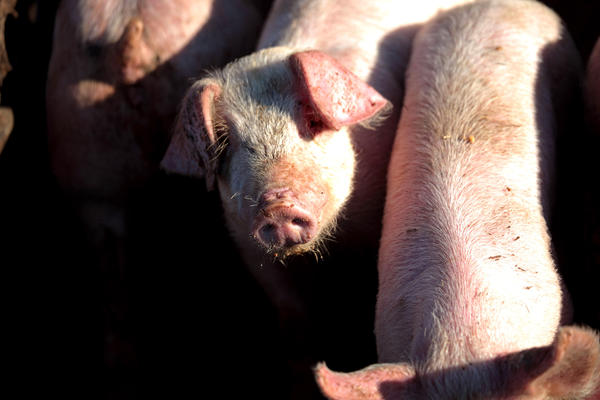 In a cycle of life and fine dining, Bob Combs turns free leftovers from Vegas casino buffets into slop for his hogs, many of which eventually land back on the buffet lines.

With a satisfied grin, farmer Bob Combs watches the big truck slowly dump its greasy load, a Niagara Falls of yesterday's kitchen leftovers that sends off a sickening spray as it splashes into a metal bin.

The greenish-brown concoction — with hot dogs, corn, bright-orange carrots and bits of lobster bubbling to its surface — is ready to start a new culinary chapter. Just 24 hours earlier, these food scraps, albeit in decidedly more appetizing form, were served up to customers at lavish all-you-can-eat buffets on and off the Strip.

"What smell?" the farmer asks with a wry smile. "Ahhhh, that's good. It don't bother me. To me, it's like walking past a bakery."

For hours each day, Combs oversees a process in which the noxious mulch is steamed, cleaned and culled for such impurities as plastic bags, champagne bottles and, once, a loaded .38-caliber pistol.

After that, it's time to ring the hog farm's dinner bell.

For half a century, long before the nation's "green" frenzy, the 72-year-old Combs has recycled not only food but also cardboard, plastic, scrap iron, outdated milk — you name it. He's one of southern Nevada's most visionary yet controversial entrepreneurs and, over time, has serviced nearly every casino on the Strip.

Each night, Combs' three trucks — with their image of a cartoon pig in bib overalls — arrive at the backsides of 12 client casinos to collect the day's buffet leavings. By morning, the slop has been whisked back to his 160-acre RC Farms, where it goes through a sorting and sanitizing process Combs devised himself, including heating tanks to meet health codes and a conveyor system to make his job easier.

Pig farmer Bob Combs has been picking up food scraps at Las Vegas casinos and feeding them to his hogs since 1963. During the recent building boom, houses were built nearby, prompting resident complaints over the odors from the farm. (Michael Robinson Chavez / Los Angeles Times) More photos

Six months later, Combs sells the pigs to middlemen, part of a process that eventually lands many back on the casino buffets. It's a cycle of life and luxury dining — 1,000 tons of food scraps each month — that pleases the fifth-generation hog farmer. Combs calls the casinos his cornfields.

The casino buffet business in recent years has morphed from 99-cent fare to spreads such as the "Bacchanal Buffet" at Caesars Palace, where nine kitchens serve up to 500 dishes, including prime rib, king crab, dim sum, roasted South Carolina shrimp, chocolate souffle, creme brulee, velvet pancakes and gelato. In the end, the leavings still go to Combs and a few recycling competitors.

RC Farms resembles the realm of some wacky artist whose passion is pigs. Porcine images prevail, with hog statues in the front yard and on the hood of a 1930s farm truck. Inside the house are pig clocks, glasses and pictures. The email of Combs' wife, Janet, is "misspiggycombs." Chickens — including a finicky rooster named Henry — rule the yard alongside rabbits, a peacock and piglets escaped from their pens.

Combs speaks with a slight slur, the vestiges of a car crash 20 years ago. He keeps his sense of humor. Dressed in a blue flannel shirt, jeans and boots left behind by a visitor revolted by their smell, he calls a shovel his "pig attitude adjuster." Riding in his golf cart, he ended a spiel about the bulk of food he handles by saying, "That's the extent of my math — I've got a headache now."

He likes feed time: "Anytime I walk by those pens and hear 'em eating — that snorting, squealy sound — that's as pretty to my ears as a babbling brook. I love to hear them hogs slop it up." 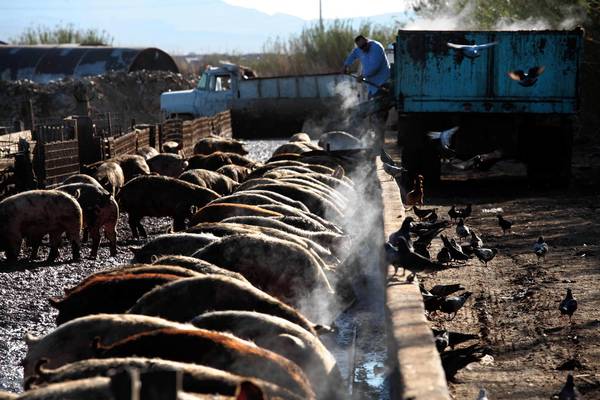 Pigs line up as a worker at RC Farms shovels out food that has been steamed, cleaned and culled for impurities. (Michael Robinson Chavez / Los Angeles Times) More photos

Not everyone feels that way. During the recent building boom in North Las Vegas, a suburb of its mammoth namesake, developers surrounded Combs' farm with rows of suburban housing so close he can see them from the pens. Residents complain about the odor, which after a spring rain can be so pungent that two nearby schools have the same nickname: "Pigsty High."

Combs' relationship with the county is tense. Inspectors say the pig farmer has banned them from his premises and protests new recycling licensing codes. "He's contentious, often irascible," said Dennis Campbell, environmental health manager for the Southern Nevada Health District. "We've been trying to work with him for years."

The farmer denies keeping officials off his land. Recently, he welcomed two animal control officers who showed up unannounced to ask about uncaged animals in the yard. Although he says he's stayed out of court, Combs acknowledges that responding to odor complaints is often a pain.

Combs has his defenders, such as casino owner Angelo Stamis, who has done business with him for five decades. "Back in the 1960s, nobody was thinking about recycling — just Bob Combs," said the co-owner of Jerry's Nugget casino in North Las Vegas. "And guess what — now his philosophy is wildly popular."

You've got a bunch of city slickers who think milk comes from a carton and hamburgers from McDonald's. They don't understand the good he's doing out there. That farm was green long before the nation was green."

Clark County Commissioner Tom Collins, another Combs supporter, says overzealous officials will not stop harassing the pig farmer until he agrees to sell his land. "You've got a bunch of city slickers who think milk comes from a carton and hamburgers from McDonald's," he said. "They don't understand the good he's doing out there. That farm was green long before the nation was green."

Combs isn't going anywhere. He says he once turned down a $70-million buyout offer: "There's a hungry world out there and I'm gonna feed it. I'm gonna go down with this ship."

Combs' recycling career began in 1963. On a family trip to Las Vegas his father stumbled across a large galvanized can where workers tossed food scraps outside the Thunderbird Hotel. To the elder Combs, it was a pot of gold.

At the family's San Diego-area pig farm, the Combses paid restaurants for surplus food. But in Las Vegas the leftovers were free to anyone who could haul them away. "This stuff had value and he knew it," Combs recalls. "But here it was waste, a nuisance."

His father mortgaged their San Diego home to buy a farm, placing in charge a reluctant son he called "Goof." Combs, then 22, ran with "fast cars and faster women."

But with his father's home on the line, Combs got to work. Wearing a suit, he hit up hotels, offering to collect food scraps twice a day and return the silverware tossed by hustling kitchen staff. He began with five clients: the Golden Nugget, Fremont Hotel, El Cortez, Jerry's Nugget and the mess hall at Nellis Air Force Base.

With most clients, Combs hauls the culinary debris free, as long as restaurants throw in their used cooking grease, a vital element in his pig stew recipe. "Pigs like things deep fried," he says. 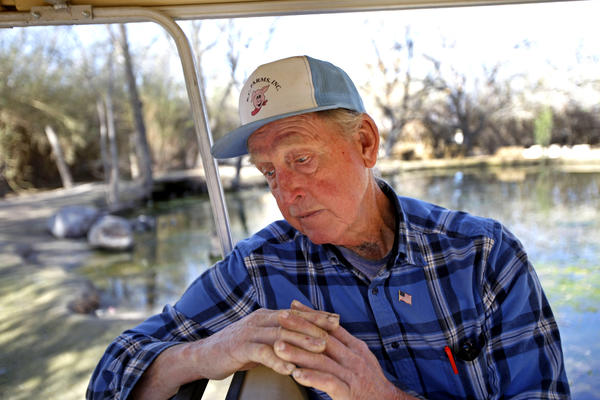 For hours each day, farmer Bob Combs oversees a process in which a noxious mulch of casino buffet leavings is steamed, cleaned and culled for such impurities as plastic bags, champagne bottles and, once, a loaded .38-caliber pistol. (Michael Robinson Chavez / Los Angeles Times) More photos

In 1991, Combs had been running his farm for decades when a crash almost killed him. He was in a truck driven by now-Commissioner Collins when the vehicle spun out of control and struck a parked semitrailer truck, smashing the farmer's skull. Janet, then an employee and best friend, winced as doctors said he'd probably never come out of the coma.

"One day, I held his hand and he squeezed it twice," she recalls. "That's when I knew Bob was back."

Today, Combs speaks with the often-muddy cadence of someone who's been drinking since noon. Even though he avoids alcohol, Janet Combs says, police have made Combs blow into more Breathalyzers than she cares to remember.

She calls Combs an old male chauvinist, joking that when the crash split his head, surgeons forgot to put all the brains back in. He lovingly rolls his eyes at her bossiness.

Out at the pig corral, Combs gazes out over the rows of pens and brags about his pigs like a proud father. What he says about pigs might be said of himself: "They're intelligent and determined. People get mad at them because they're stubborn, but they're conservationists."

He knows all his hogs must eventually go to market. "I don't dwell on the slaughter," he says. "We're all gonna die. These pigs lead short and sweet lives. And they go to a good cause: feeding people." 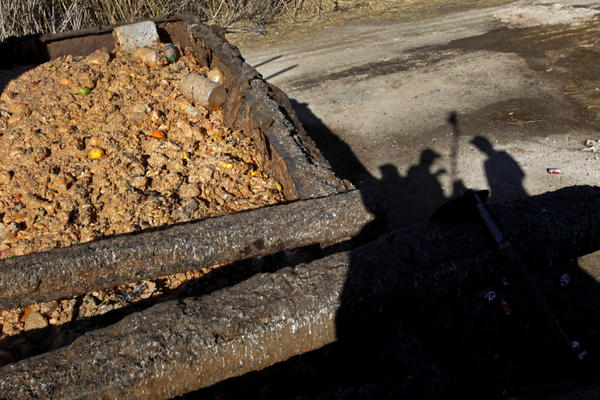 Pig farmer Bob Combs likes feed time: "Any time I walk by those pens and hear 'em eating — that snorting, squealy sound — that's as pretty to my ears as a babbling brook. I love to hear them hogs slop it up." (Michael Robinson Chavez / Los Angeles Times) More photos

It's chow time at RC Farms.

Combs watches a worker atop a motorized cart move down a line of 22 pens, each holding 10 5-week-old piglets, pink-skinned in the morning light. He tosses the first load of gruel over the heads of the hungry hogs. While they run after that first diversionary shovelful, he quickly dumps three more loads into bowls just inside their enclosure.

The outfoxed pigs soon return to the bowls. Grunting and snorting, they snarl at one another, some stepping in the food they eat. Outside one trough, a sign reads "Mess Hall."

Nearby, a worker in a white uniform wears elbow-length gloves to reach into a muck of the latest casino castoffs and retrieve such unwanted ingredients as metal silverware, plates and huge bones. He grabs chunks of ham and slices them to piglet-mouthed size.

Sludge flying, he pushes the remains onto a conveyor belt that sends them into a processing plant that skims off the top layer of grease, which Combs sells to soap and cosmetics makers. "Most everything is reusable if you put some effort into it, some common sense," he says.

Sometimes, though, Combs tires of the whole affair — the neighborhood complaints and nagging county officials. He gets tired of pulling plastic bags and bottles, which he knows could harm his pigs, out of the food scraps. He looks up at the unforgiving desert sun and asks himself, "Why am I doing this?"

Moments later, after downing a glass of well water, he's back at work, reveling in the squeals that have become music to his ears.

Texas beauty queen will charm the masses — of snakes