This pistol-packing pastor shows others how to put their trust in God and take their security into their own hands. 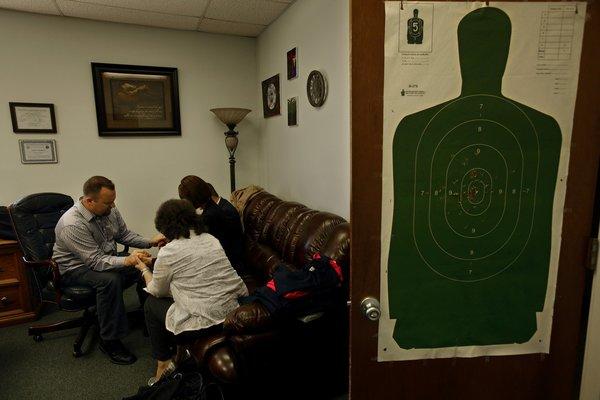 McAbee prays with parishoners in his church office, which holds reminders of his side job as a shooting instructor. More photos

Pistol-packing pastor James McAbee shows others how to put their trust in God and take their security into their own hands.

BEAUMONT, Texas — Two years ago on Super Bowl Sunday, Pentecostal preacher James McAbee was getting into his car after services when he heard a commotion. He saw two men break a window and enter a church hall that was being renovated.

McAbee called 911. The dispatcher said it would take officers at least 11 minutes to respond.

He lingered outside for a moment, frustrated.

"I could hear them snapping the lumber and carrying the sheet rock," McAbee said.

The pastor drew a .380 pistol he wore in an ankle holster and burst into the hall — only to find two adolescents.

McAbee, who'd had a troubled youth, saw himself in the pair. He lowered his gun to offer some fatherly advice, but the older one, a 17-year-old with two outstanding drug warrants, rushed the pastor with the pointy end of a broken 2-by-4.

"I got my gun back out in time," McAbee said. "He froze in his tracks. I said, 'Son, you better not move or I'll put one right in your watermelon!'"

The pastor held them until police arrived.

When the teens agreed to a court-ordered program, McAbee did not press charges. He told reporters he was glad he hadn't shot them — but he was also glad he'd had his gun.

Word spread. McAbee, 36, became known around this industrial Gulf Coast city east of Houston. Strangers picked up his tab at restaurants and approached him at gas stations and Wal-Mart to pose for photos and talk about guns. 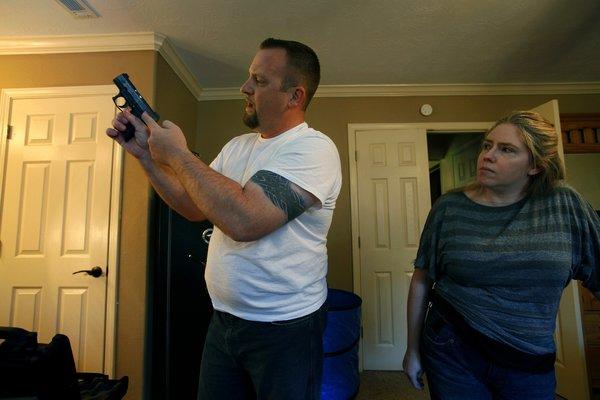 McAbee and his wife, Misty, keep their guns in a safe in their bedroom--when they aren't wearing them. More photos

Soon he had a nickname: Triple P, the pistol-packing pastor.

Just after dawn one recent Saturday, the Rev. McAbee strapped a Glock .40 to his waist and drove deep into the East Texas pine woods to Dirty Harry's shooting range.

He began teaching gun classes shortly after he earned his nickname, and cites Scripture that he says justifies the classes: Psalm 144:1, "The Lord has trained me for battle"; and Luke 22:36, in which Jesus instructs the disciples to arm themselves.

He was expecting more than 100 people to attend his latest class, mandated by the state for concealed handgun licenses.

Students' shooting skills varied. Some had grown up hunting. Others had never fired a gun and recoiled at the kick as shell casings flew through air tinged with gun smoke. A few had trouble finding ammunition because of increased demand, and had to borrow from classmates.

People think I'm a gun nut and gun crazy, but I'm not. I don't want to hurt anybody. ... But that doesn't mean I should let them hurt me."

McAbee, with his crew cut and black bulletproof vest, was a stocky, affable presence. He showed them how to grip their guns, avoid the bite of the slide, take aim and shoot their paper, people-shaped targets. He would grade their accuracy.

"Is the line ready?" McAbee called out. "Let's lock and load!"

The class costs $50, free for teachers. In recent months, McAbee's business has tripled and he's trained more than 1,000 people.

Darren Smith, 33, a human resources manager, enrolled with his wife, a high school teacher, after hearing how McAbee handled the burglary.

"He lives with the impact, and the way he teaches comes from that experience," Smith said.

Guns were a normal part of McAbee's life. He was raised in the small town of Clover, S.C., where his grandfather took him hunting. His mother worked in law enforcement and carried a gun.

One day at the range, his mother accidentally shot and partially paralyzed herself. McAbee was 9.

He grew up caring for his mother, and the stress took a toll. As a teenager he started using drugs and stealing to feed his habit.

When he was 18, McAbee was caught breaking into an elderly neighbor's house. He was convicted of burglary, aggravated assault and battery, and served 2½ years in a maximum-security prison.

There, McAbee felt called to preach. His grandfather sent him a leather-bound Bible. After McAbee's release, he was ordained by the Assemblies of God, married and had children.

But McAbee felt incomplete. He twice applied for a pardon to clear his record.

In 2008, his mother again wounded herself with her own gun. Weakened by the shooting, she died later that year.

McAbee's attitude about guns was unchanged: "Don't blame the tool."

The next year, McAbee's pardon was granted. Afterward, he exercised as many of his rights as he could: He became a notary, voted, bought a rifle and went deer hunting.

The Rev. James McAbee, top, locks up the guns at his home. He and his wife watched as son Connor, 6, posed with a .22 rifle, which he knows how to use. More photos

McAbee was hired three years ago as pastor of Lighthouse Worship Center. His church faces the interstate in a low-income neighborhood where gun crimes and celebratory gunfire are not uncommon.

In his office, McAbee lined a shelf with bullets, some collected outside the church. Across from his desk hangs a paper silhouette, his most recent target — a perfect score.

Next to his desk, he posted a picture of President Obama. McAbee respects him. But the day after Obama was reelected, the pastor bought an AR-15 assault rifle for $989 because he was concerned about new gun control legislation.

On occasion, McAbee wears two guns to church — the .40 on his hip and the .380 in the ankle holster. His wife also carries a concealed gun. Neither has a safety on the guns they carry, and they like to keep a bullet chambered.

"People think I'm a gun nut and gun crazy, but I'm not. I don't want to hurt anybody. I believe the Bible teaches peace. But that doesn't mean I should let them hurt me," he said.

Recently, while McAbee was dining out with his family, a stranger called him a felon. Someone questioned on Facebook why, as a former felon, he was teaching a gun class.

Some members of his church noticed the comment online. A few knew the truth. Many didn't.

"I thought people would hold that against me," McAbee said of his past. "I didn't want people to know."

Last month, he decided it was time to confess.

He stood at the pulpit one Sunday, prison Bible in hand, Glock .40 holstered under his striped dress shirt, about to reveal his secret.

"I've always felt disqualified my whole life. I always felt I had to prove something," McAbee told about 30 church members gathered in the spare, modern sanctuary.

The congregation fell silent as McAbee told the story of his conviction, release and pardon. He talked about his prison ministry, holding his Bible aloft. Inside, he had tucked a copy of his pardon.

"My life is a testimony. I'm not ashamed of who I am. We've all messed up. We've all been given a second chance," McAbee said.

In the front row his wife, Misty, wiped away tears.

"All those voices in my past have died," McAbee said. "I'm not ashamed from here on out."

My life is a testimony. I'm not ashamed of who I am. We've all messed up. We've all been given a second chance."

McAbee opens the nearly 5-foot-tall blue Field & Stream gun safe in his ranch house to examine the family firearms as his children play nearby.

It took four men to hoist the safe into his bedroom. McAbee could have stored it in the garage, but he worried moisture might damage the guns, or that it might get stolen.

"If anybody got in the house, it's right here," said Misty, 37, a caseworker for Texas Health and Human Services.

Their son Mason, 1, wanders by with a Nerf gun, making exploding sounds. McAbee steers him away from the safe, which is filled with long guns, handguns such as the .357 revolver he calls "Old Bessie," and stacks of ammunition — 10,000 rounds, including ballistic tip bullets that mushroom or "rose petal" on impact, and extended clips for his AR-15.

"My children will never know the combination," McAbee said.

Jadyn, 11, a gymnast with a ponytail and a penchant for glitter, is resting on her parents' bed, ignoring what's inside the safe, when her 6-year-old brother, Connor, runs in.

"He hasn't shot a gun," his father teased, and Connor shouted back, "Yes, I have!" 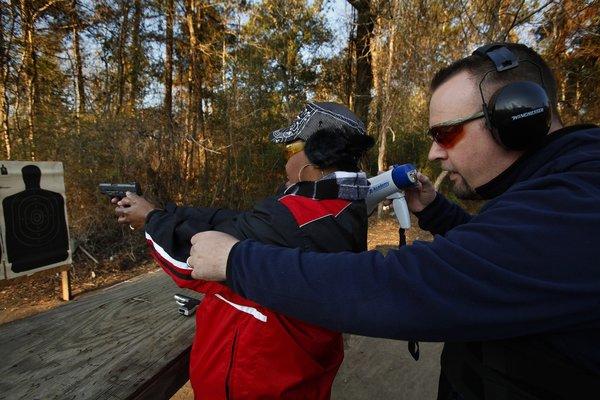 In addition to the classes he teaches for concealed weapons permits, McAbee is starting a gun safety class for children, including his own. More photos

Connor has shot a .22 rifle. His sister can shoot a .22 and a 9-millimeter. McAbee likes to share videos of his children at the range. He compares teaching them about guns to getting them vaccinated.

The McAbee children know their parents carry concealed handguns (although today their mother's gun didn't fit under her sweater dress, so she left it in the station wagon).

"I'm happy my dad has a gun," Jadyn said. "I'll be even happier if my teacher has one."

The McAbees have applied for a federal license to open a gun shop. This Sunday, McAbee plans to offer his first gun safety class for children, including his own.

Connor says that if he found a gun, he'd run and tell his dad. Jadyn says she'd call 911.

"What is it that Daddy always says?" her mother asked. "Treat all guns …"

Standing next to the open safe, Glock .40 in hand, the pistol-packing pastor smiled.

Myanmar's film industry is a flicker of its former self