Los Angeles celebrated the first Earth Day on April 22, 1970, but not without some friction and crazy stunts. Here are some of the wackiest things that happened in and around Los Angeles for Earth Day 45 years ago:

A resolution expressing the city’s support for the first Earth Day was nearly upended by one councilman, who warned that it fell on Vladimir Lenin’s birthday and could “promote Soviet-type radicalism.”

According to the Los Angeles Times, Councilman James B. Potter balked at the resolution and read a news report that suggested “far left groups were planning to take control” of the Earth Day events and hijack them for demonstrations celebrating Lenin’s 100th birthday. 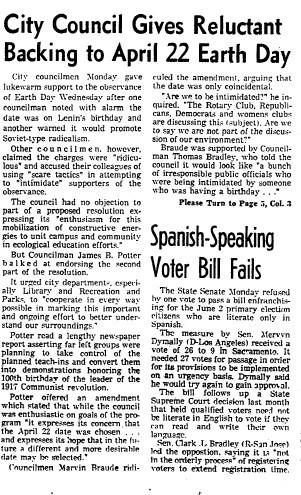 Councilman Tom Bradley (who later became mayor) pushed back, saying the council would look like “a bunch of irresponsible public officials who were being intimidated by someone who was having a birthday.”

Bradley declared that St. Peter was also born April 22. “Should we change his birthday?” Bradley said.

Another councilman, Robert Wilkinson, labeled Earth Day activists “radicals who have taken actions against our own government,” claiming that, at a recent meeting on the environment, he had heard young people “urge a change in the American form of government.”

“They didn’t even salute the flag,” Wilkinson said.

The council voted, 8-6, to approve an amendment stating that, although it supported Earth Day’s goals, “it expresses its concern that the April 22 date was chosen … and expresses its hope that in the future a different and more desirable date may be selected.”

Wearing gas masks and marching to a dirge of drums, students at Santa Ana High School held an 8 a.m. parade, carrying a coffin that contained a globe, “symbolic of a dead Earth.” 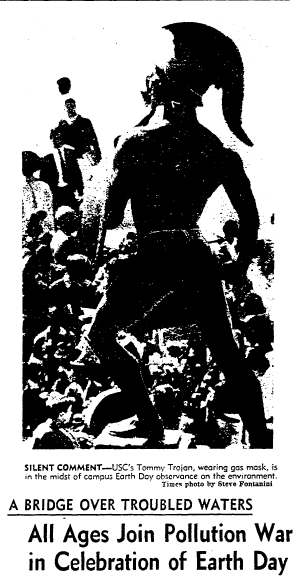 USC students joined in with an Earth Day car engine burial ceremony, but they took it up a notch by outfitting the Tommy Trojan statue with a gas mask -- a stunt that landed on The Times' front page the next day.

While many Southern California students decided to walk or bike to school instead of drive, about 60 Palos Verdes high school students arrived at school on horseback.

One planned Earth Day exhibit at Van Nuys Junior High School involved a 24-foot plastic bag filled with air. Students were supposed to climb into the inflated bag, developed by UCLA researchers to study human behavior in crowded environments, to demonstrate the effects of an overcrowded Earth.

A social studies teacher who organized the event said that students confined in the bag for up to an hour “have experienced emotional reactions including aggression and tension.”

In another exhibit, this one intended to address water pollution, goldfish swimming in clear water were placed side by side with fish in water containing “small amounts of DDT, sludge and detergent.”

An Earth Day miracle: No smog in L.A. 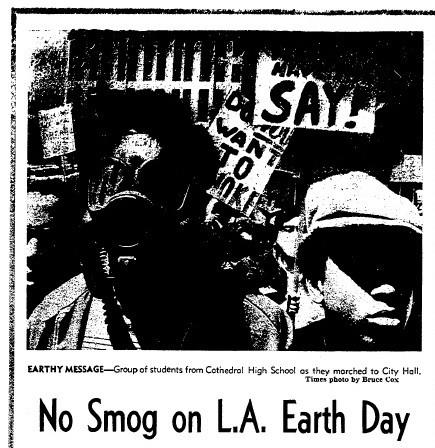 “No Smog on L.A. Earth Day,” The Times proclaimed the next morning. The roundup of various Earth Day activities led with the “notable absence of smog,” and pointed out that the local air pollution control district reported “barely marginal” smog readings.

Students at Loara High School in Anaheim were labeled Marxist sympathizers and nearly had their Earth Day plans derailed by an emergency school board meeting the night before.

A group calling itself the California Citizens Committee printed leaflets condemning planned discussions on population control in relation to Earth Day as “part of the whole Marxist revolution now proceeding apace in America.” The leaflets called population-control proponents “Marxist-Ecologists” who had contempt for human life.

A bid to scrap 10 of the high school’s Earth Day panels failed, and activities went on without a hitch, The Times reported, including a plan to “pelt its ‘trashy queens’ [we're not sure what those are] with banana peels, tomatoes and other garbage” during a lunchtime rally.

Some 70 protesters, most of them under 30, arrived in Los Angeles County on Earth Day after walking for more than a month from Sacramento.

They left Sacramento on March 15, winding their way down the state holding eco-festivals and other events along the way. Four cars — a first-aid truck, a cook truck, an exhibit trailer and an equipment truck — backed them up.

They arrived in Castaic with chapped lips, sunburned faces and sore feet and later held a teach-in at William S. Hart Park in Newhall. They were scheduled to reach Los Angeles on May 1.