New Mexico’s drought threatens the flow of a culture

Communal watercourses called acequias, some of which date to the 1600s, connect people to their land, neighbors and ancestors. But as the channels dry up, farmers consider more efficient irrigation.

New Mexico's drought threatens the flow of a culture 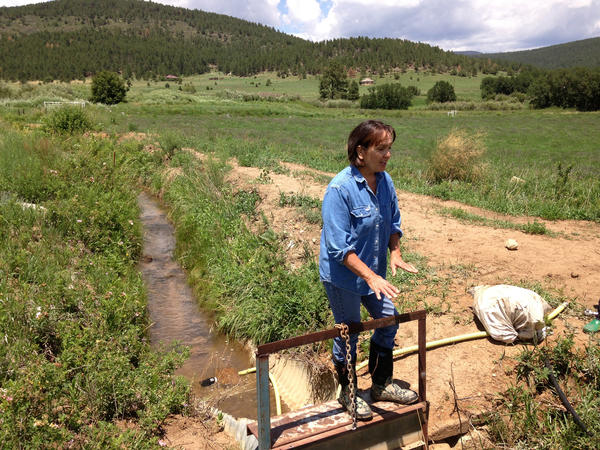 Peggy Boney stands above the gate to the acequia -- earthen irrigation canal -- on her farm in New Mexico's Mora County. Engineered to use gravity and the natural contours of the land, the acequias feed arterial channels, which spread out like capillaries in the fields. More photos

Communal watercourses called acequias, some of which date to the 1600s, connect people to their land, neighbors and ancestors. But as the channels dry up, farmers consider more efficient irrigation.

Photography and video by Cindy Carcamo

or 200 years, the earthen water canal has nourished the land where Peggy Boney's farm now sits. It sustains the alfalfa pastures for her cattle and the corn and pumpkins she puts on her kitchen table for supper.

Much of her life has revolved around these acequias, primitive but ingenious irrigation channels invented by the Moors and built in New Mexico by the Spanish.

As a girl, she enjoyed dangling her feet in the acequia maintained by her father. At night, as she lay in bed, he would bid her, "Good night, God bless you," and she would fall asleep to the gentle ripple of the water, the acequia's ancient song.

Now, that song is fading, in some places down to a whisper.

Across the state, a historic drought has reduced the water to a shallow stream in some acequias, a trickle in others. Some channels are parched. Some people, even elders leery of change, are asking whether it's time to try more modern methods of irrigating the land.

Such an idea was once unthinkable. For Boney and other old families of New Mexico, a land where the past seems ever present, the water crisis threatens not just livelihoods but also the connection they feel to their Spanish ancestors.

New Mexico has more than 800 acequias, some dating to the 1600s, said Paula Garcia, executive director of the New Mexico Acequia Assn. The waterways can be several feet across or as compact as a narrow ditch.

The communal watercourses carry snow runoff to distant fields. Engineered to use gravity and the natural contours of the land, the acequias feed arterial channels, which spread out like capillaries in the fields.

A primitive network of 70 canals conveys water to the Mora Valley here, north of Santa Fe. Boney's acequia runs through the upper half of her farm. Fields of alfalfa stretch out toward the Boney home with a garden full of peas, cabbage and hoop houses bursting with sweet tomatoes and fragrant basil.

Every spring acequias must be cleaned of debris, a drudgery but a chance for friends and family — because many hands are needed — to catch up. Each acequia is maintained by an association of families who draw water from it, headed by a foreman or mayordomo.

The sun is rising. I will keep working to maintain what I love so dearly."

— Lyrics from a song about the acequias

The meaning and romance of the acequias have been captured in a lively song Boney heard for the first time this summer.

"The sun is rising," say the lyrics in Spanish. "I will keep working to maintain what I love so dearly."

"Oh, my God. This is about my dad," Boney thought. "They're talking about my dad." She cried.

Her father, Pete Apodaca, was the mayordomo of the acequia in San Jose, about 50 miles southwest of here, for 15 years. The retired supervisory groundskeeper spent almost every day from sunup to sundown tending what he grew — jalapeno peppers, blue corn, squash.

"Those who do not work do not eat," he repeatedly told Boney.

She remembers how she loved watching her father open up the acequia. He lifted a small gate. The water crept into the furrows, brightening up the peppers and peas.

It's not the most efficient method during drought — farmers inundate the furrows. Slow and deliberate drip irrigation saves water and provides the plants with steady sustenance.

About four years ago, Boney heard friends at the association talk about testing other methods of irrigation. She never took them seriously.

"We always have water," Boney recalled thinking. "Why worry about it?"

This year was different. Townspeople began talking about the water shortage and their fears the drought would worsen. Newscasters led nightly broadcasts with reports of a statewide water crisis. New Mexico was the driest state in the nation, the reporters declared.

"Really? Us?" Boney said to herself. Most who draw from the acequias (pronounced ah-SEH-kee-ahs) are small farmers who grow food just for themselves. Others, such as Boney, sell their fruits and vegetables but consume some of the harvest.

This year she noticed that her acequia had been flowing lower than in the past.

The acequias, primitive but ingenious irrigation channels invented by the Moors and built in New Mexico by the Spanish, have always been a part of Peggy Boney's life.

"I need to listen a little more," she thought. "Maybe there is a better way."

Her husband, John, the mayordomo of the acequia at their farm, was also reluctant at first. By May, friends with the acequia association persuaded the Boneys to set aside a test plot — 100 feet long and 70 feet wide — and install drip irrigation to grow lettuce, chard and other vegetables. It's the first time such irrigation is being considered for wide use in the county.

Antonio Medina, who encouraged Boney to try drip irrigation, was once uncomfortable with straying from the old ways. But the 75-year-old Medina has never seen a drought like this.

"You can't have it your way all the time," he said.

Medina remembers he was about 4 years old when he first heard his mother talk about the acequia — he had just jumped into the canal to cool off.

"Dile que no se meta en la acequia," she told his father. Tell him to stay out of the acequia.

She explained that he needed to respect the waterway and the animals and plants that drank from the ditch. It was then that he understood.

"All of life needs water," he thought.

On warm days decades ago, Boney would sit with her father on a footbridge over the acequia of her childhood. The pair would lower their feet into the cool water and catch up on the day's events.

In the spring, she watched the men clean the channel, some shoveling out the muck, one taking a chainsaw to stubborn willows. Boney kept her father's books, documenting each person's task.

The drought has forced acequia associations to make tough decisions when parceling out the dwindling water. Family gardens and livestock get first priority. Garcia, of the statewide association, said many fields had gone without. 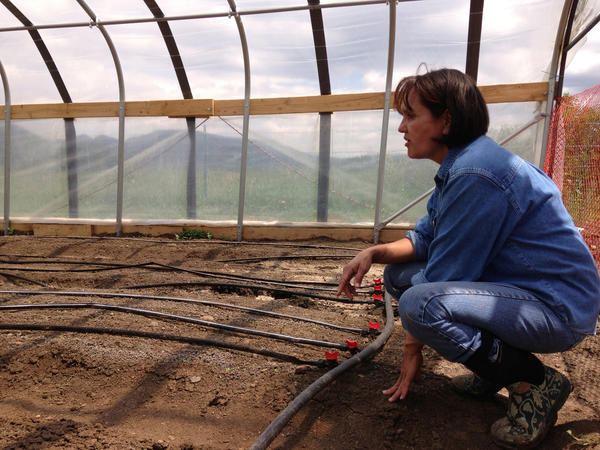 Although reluctant, Peggy Boney agreed to try drip irrigation on a small plot of land. It's the first time such irrigation is being considered for wide use in the county. More photos

One afternoon this summer, Garcia toured the drip irrigation plot on Boney's land. Dark clouds formed in the north, but even a torrential storm wouldn't be enough to quench the land and refill the acequias to what they once were.

So far, the drip system has been a success, with a few green lettuce buds sprouting from the dark soil. The water comes from the acequia but is released slowly through black plastic irrigation tubing. About 50 people have come to visit the test plot, Boney said.

Even as the duo studied the parcel, they couldn't resist the allure of the acequia as it burbled nearby. They chatted about its soothing sound and smiled after seeing its banks so green, sprouting with white wildflowers after the latest downpour.

The day after Garcia's visit, Boney's father died. Pete Apodaca was 102 years old. Boney asked Garcia to find someone to sing the "Canción de las Acequias" at the funeral.

At the service, mourners were given cards with the lyrics, which spoke of corn and chile, seeds and gardens, of autumns and stars shining above winter snows.

Garcia stood next to the casket, strummed her guitar and sang the song of the acequia. Soon Boney and others joined in. 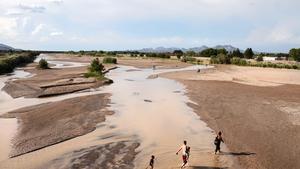 This used to be shortgrass prairies. We've ruined it and it's never going to come back."

Past is always a present for San Juan Capistrano preservationist 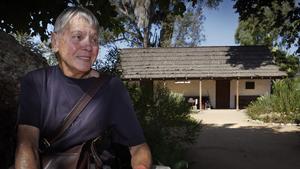 Changing faiths at the Crystal Cathedral 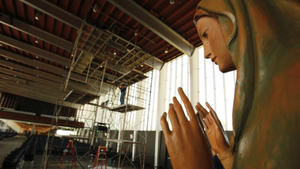 Catholic on the inside, but kind of Protestant on the outside."