Trapped between the covers of Nevada’s Black Book

Frank Citro Jr. is on the list of undesirables blackballed by casino regulators. At 68, he’s trying to do what no one has ever done: Get off while he’s still alive. 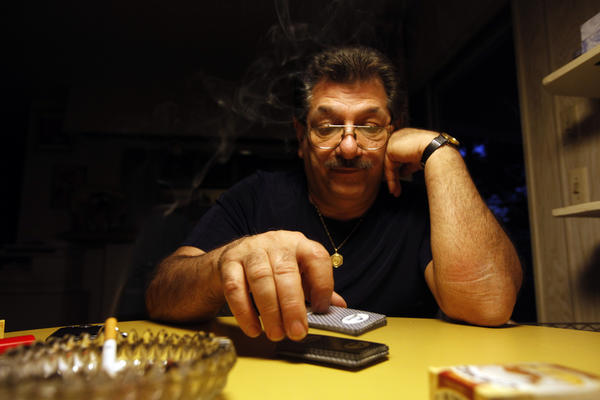 Frank Citro Jr. is on the list of undesirables blackballed by casino regulators. At 68, he’s trying to do what no one has ever done: Get off while he’s still alive.

LAS VEGAS — Frank Citro Jr. is holding court at his regular table at a dingy roadhouse, about as far from the glamour of the Strip as you can get.

Men in suits stop to pay their respects, some kissing the cologne-splashed cheek of the guy they call Frankie. It's a gesture of affection, like those of his neighborhood cronies in Jersey City, back in the old days.

But more recent days haven't been so kind to Frankie. He loves this live-music joint, don't get him wrong. When you're Frank Citro Jr., there are only so many nightspots in this town where you're still welcome.

For 23 years, Frankie has been included in Nevada's Black Book, officially the "Excluded Person List," an index of desert undesirables blackballed by the state's casino regulators. Since its inception in 1960, the book has included such mobsters as William "Icepick Willie" Alderman, Murray "the Camel" Humphries and Chicago crime boss Sam "the Cigar" Giancana.

Black Book inclusion means you can't own, manage or even enter a casino. The only way off the list is to die, and even then state regulators require a death certificate as proof that you are, indeed, truly departed.

Now the 68-year-old Frankie is attempting something never tried in the book's history: He wants off the list while he's still alive.

"I don't belong in this book," he said in his thick Jersey accent, an unlit Camel dangling from his lips. "I never cheated a casino, never had a fight there. I'm just supposedly a notorious felon. There are lots of felons in this town. Why me?" 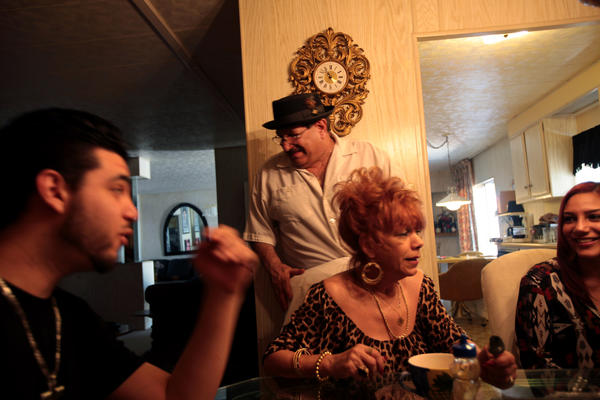 Frankie Citro has lunch at his home with his family, including his son, Frankie Jr., left, wife Cookie and daughter Bettina. More photos

Rumors of the move have caught Nevada's Gaming Control Board by surprise, and officials had to consult their rules to determine that the challenge is indeed allowable. Now Frankie is collecting documents and contacting character witnesses before his attorney requests a hearing with the board.

"For someone to come forward after so many years on the book," said , deputy chief of the Gaming Control Board enforcement division, "that's something that's never been tried before."

In 1985, Frankie and six others were convicted of bookmaking and loan-sharking operations in Southern California and Las Vegas that prosecutors said charged clients as much as 1,000% interest. He spent two years in prison.

I never cheated a casino, never had a fight there. I’m just supposedly a notorious felon."

To gaming officials, the verdict — not to mention the fact he had consorted with known mobsters — made him the kind of notorious character they didn't want in Nevada's casinos. So they put him in the Black Book, a distinction that dims even the brightest lights of Sin City. Being inside a casino, he knows, can mean arrest and even jail time.

Frankie says the book discriminates against Italian Americans — half the list's 33 current members have Italian surnames — and promotes Mafia stereotypes. This in a city that has embraced its organized crime roots with not one, but two, mob museums.

Frankie is stubborn. Since being placed in the book in 1990, he has refused to leave Las Vegas to avoid the slightest hint of surrender. He continues to embrace a street-wise image, making wisecracks, gesturing with his hands and shoulders, ending sentences in "boom, boom, boom." He likes to say he knows only two real tough guys, and the other one sends him a Christmas card every year.

Frankie grew up the youngest of three sons in an Italian neighborhood in northern New Jersey. He showed an entrepreneur's eye early on, shining shoes for neighborhood thugs. At age 13, he chased two guys into an alley. One put a gun to his head. He flinched and he hated himself for it. That's when he vowed to never fear another man. 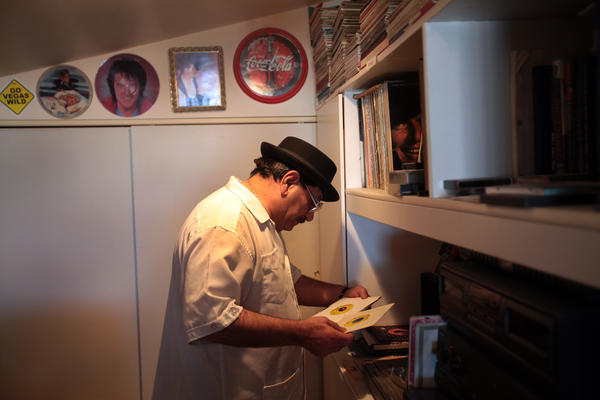 Frank Citro looks at some of the many 45 rpm records in his collection. He donates time for charity, rounding up bands and singing his beloved doo-wop music at fundraisers. More photos

Soon he was running numbers, fencing stolen goods. He became a bouncer. He worked collections. He bare-knuckle boxed for years, breaking people's bones in and out of the ring.

He was a tough guy, he said, but not a made guy. Frankie said he was never a member of organized crime. "I never wanted those guys telling me what I had to do," he said. "Only my mother had that power."

While starting his federal sentence, Frankie realized he was going to miss a crucial time in the life of his 1-year-old son, Francesco. That's when he swore he'd never go back to prison, even if it meant cleaning toilets. One of the first jobs he got on the outside was running his own janitorial company.

"How many people promise to never return to jail again?" said his 20-year-old daughter, Bettina. "My dad actually kept his word."

For a quarter-century, Frankie has avoided jail and is off probation. He donates time for charity — rounding up bands and singing his beloved doo-wop music at fundraisers.

But sometimes it seems Frankie has tried to capitalize on his past. He briefly starred in a series of Internet skits called "Frankie's Way: Real-Life Wise Guy," which producers unsuccessfully sought to sell to cable television.

So why embrace the stereotype when he's trying to rehabilitate his reputation?

"It's all I've got left," he said of his boom-bah persona. "They've made it so I can't find work in this town. It's like I have leprosy."

Frankie showed up for his Gaming Control Board hearing in 1990 dressed in a tuxedo. It was a minor gesture of mock respect: Just out of prison, he figured he had paid his dues. The federal government had confiscated his Las Vegas luxury home. Now Nevada wanted to banish him from its casinos?

State prosecutors challenged his character, waving headlines of his racketeering trial that screamed phrases like "brass-knuckle therapy." Frankie found that particularly insulting: He'd never hit a man with anything but his own fists.

Because of his criminal conviction, Frank Citro had to downgrade from nice homes to a double-wide mobile home on Las Vegas' north end. More photos

They’ve made it so I can’t find work in this town. It’s like I have leprosy.”

Officials decided he was "notorious and unsavory," a guy with mobster cronies. "They just buried me," he said later. "They buried a man who's still alive."

Critics call the book an outdated relic of an era when wiseguys called the shots. Card cheats and slot crooks now pose a bigger threat to the industry, and some appear on the list. The last entry, Philadelphia mobster Frank Bulgarino, was added in 2004.

"I represented a lot of people in that book," said Oscar Goodman, a former mob lawyer who later became Las Vegas mayor. "Many haven't even been convicted of a crime. They just supposedly brought ignominy, scorn or derision to this great state of Nevada. It's draconian and it's silly."

Nevada's Excluded Person List was launched with the names of 11 reputed gangland figures. The book was later imitated by gaming states such as New Jersey, Michigan and Mississippi.

The Black Book really isn't a book and it's not even black. Originally bound by a black leather cover, it's now a shiny gray binder. It still strikes fear in nominees.

When alleged mobster Stephen "The Whale" Cino learned of his hearing in 1997, the 325-pound felon told state investigators, "You just ruined my lunch." At his hearing in 1987, gangster Frank "Lefty" Rosenthal screamed that he had dined with many board members, only to be stabbed in the back.

Some friends have turned their backs on Frankie, but he has new believers in his camp.

Like the North Las Vegas police officer he helped raise money for children with cancer. "I'm a cop. I deal with lots of people who did things 40 years ago, now trying to eke out a living," Steve Noahr said. "You pay your debt to society, why be persecuted for life?"

Former Nevada Lt. Gov. Lonnie Hammargren said that "if anyone gets off that list, it should be Frankie."

He added: "It's not just his past that put him in that book; it's where he came from, his speech, his accent. At this stage, he's probably cleaner than 90% of corporate Las Vegas making deals behind closed doors today." 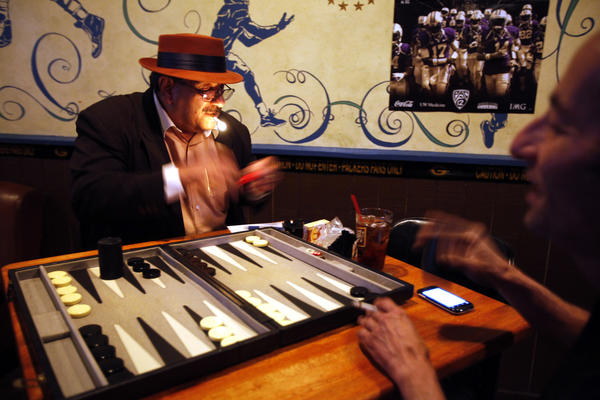 For now Frankie makes do. He's had a succession of business ventures with only fleeting success — including a bar and strip club manager, plumber and carpenter. Job interviews go well, until bosses learn about the Black Book. He isn't obligated to tell them, but the list pops up in a quick Internet search, and some in this town see it as a bigger black mark than the racketeering conviction.

Before the Black Book, he owned a nice house. Now he frets about paying rent for the space where he parks his double-wide trailer. The frustration has taken a toll on his health. A doctor has warned him of a possible blocked artery. But Frankie says he's not having any : That would ensure defeat.

With sadness in his voice, he mentions the 1994 film "," in which a convict played by says he wants to talk to the young man he once was, just to tell him how stupid he is.

Now Frankie awaits his new day in casino court, seeking redemption in a realm where there have been no second chances. This time, he thinks he'll skip the tux.

[For the record: A photo caption in a previous version of this article misspelled Bettina Citro's name as Betina.]

Watch the video: Frankie Citro on his quest

More great reads from Column One: