In Wyoming, he’s tough enough to be a Sissy

Longtime cross-dresser Sissy Goodwin of Douglas, Wyo., has been anything but weak as he stands up to bigotry in the Cowboy State.

He's tough enough to be a Sissy in Wyoming 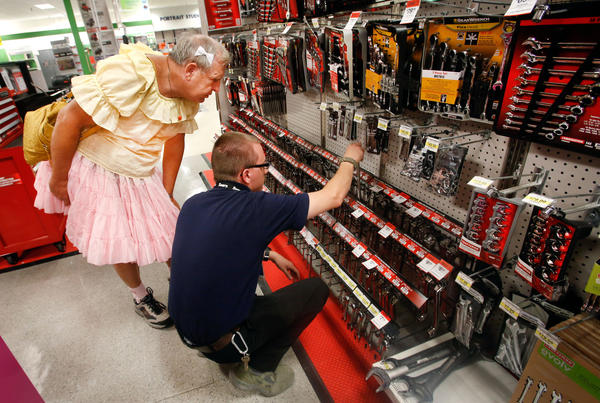 He's tough enough to be a Sissy in Wyoming

Sissy Goodwin shops for an industrial-sized wrench in Casper, Wyo. He began wearing skirts and blouses in public in 1972. More photos

Longtime cross-dresser Sissy Goodwin of Douglas, Wyo., has been anything but weak as he stands up to bigotry in the Cowboy State.

Photography and video by Mel Melcon

Sissy Goodwin is out shopping. He's on the hunt for an industrial-sized wrench for a home handyman project along with two special somethings: colored hair bows and a pretty new dress — preferably red, size 12.

He walks through a mall, a linebacker-sized figure in a pink skirt, lacy yellow blouse and five-o'clock shadow; a gold lamé purse slung over his shoulder and a white bow affixed to his receding gray hair. The 67-year-old college science instructor looks straight ahead, ignoring the stares and the catcalls.

"Boy, you're cute," says a middle-aged woman, who then laughs derisively.

In a hardware store, a man shakes his head in disgust. Another asks, "Is it a prank? A joke?"

Back in the car, the object of such scorn puts on pink sunglasses adorned with a tiny red plastic bow. "I got them in Reno," he says. "Aren't they cool?"

Goodwin is a cross-dresser in the Cowboy State, a place known for its big-buckled outdoor ethic and intolerance of alternative lifestyles. It is the state remembered for the death of college student Matthew Shepard, who was tortured and killed in 1998 because he was gay.

For most of his life Goodwin has lived a compulsion — one that at times has made him cry and embarrassed his family. But he found out long ago that he can't stop himself.

Cross-dressing is widely considered aberrant behavior even in the most liberal big cities, but out here in the nation's least-populated state, the practice is almost unthinkable. For decades, Goodwin has endured a profoundly hostile environment. He has stood up to bigotry and has begun to make a difference.

What sets him apart, he says, is what he calls gender independence: He just likes to do most things in a dress. 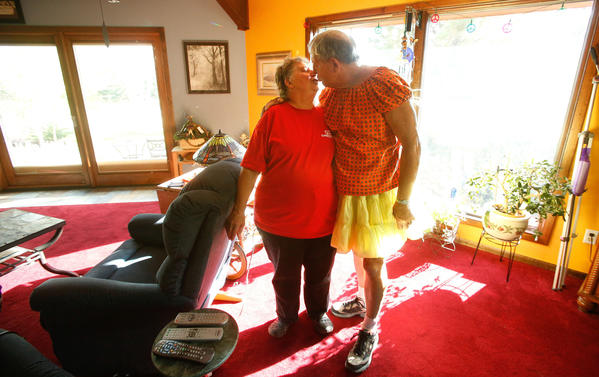 Sissy Goodwin, right, with Vickie, his wife of 45 years. They have two adult children. More photos

Larry Goodwin was born in Douglas, Wyo. (population 6,000), raised by an alcoholic mother and abusive stepfather. Secretly dressing up in girls' clothing offered what he now calls "a safety valve; an escape from a hostile environment."

The obsession persisted, even when he was an Air Force crew chief in the Vietnam War. He received an honorable discharge after an officer caught him wearing a pink nightgown. Back in Wyoming, Goodwin still outwardly dressed as a man. When he competed in rodeos, he feared any mishap might land him in a hospital where doctors would discover the women's panties under his cowboy chaps.

He divulged his secret to his soon-to-be wife, Vickie, who already suspected — she'd caught a glimpse of lace beneath his blue jeans. At first, she took his oddity in stride, but years later would ask herself, "My God, what have I gotten myself into?"

In 1972, Goodwin started to wear blouses and skirts in public. Severely depressed, he concluded that if he wasn't true to himself, he would eventually end his life.

That's who and what I am. I wear women's clothes."

The harassment began in earnest. A stranger once drove up to his house and kicked out his front teeth. People called him a queer and a pervert. He's also been booted from countless stores, hotels and restaurants, all because of the way he dresses.

A defining moment came when doctors helped Goodwin understand his cross-dressing. With Vickie's help, he worked to accept himself. Each morning, standing at a mirror, often weeping, he repeated a mantra: "I am a good person."

Later, when a woman called him a sissy, he took possession of the insult and assumed the name. "First I was offended. Then I saw it: 'That's who and what I am. I wear women's clothes.'"

After Goodwin was arrested in a department store in 1979 for wearing a dress, Casper police offered to drop the charges if he'd quit cross-dressing in public. Goodwin refused, saying no laws forbid the practice. Police backed down and later offered officers diversity training.

Still, a rattled Goodwin put his house up for sale. Then he realized the truth about Wyoming.

Wearing what he wants

A former rodeo rider has faced a lot of harassment for wearing women's clothes.

"When someone doesn't meet their expectations of what a man should be like, they run him out of town," he says. "I wasn't going to go."

He remained defiant. On business in Salt Lake City in 2004, he was beaten outside a pizza shop by a gang of men. He refused to call police, figuring they would arrest him instead of the attackers who had bloodied his face.

While Wyoming is the self-proclaimed Equality State, Goodwin has another name for the place: the Mississippi of the West, where equality comes only to the majority. He says his greatest insults have come not from any homophobic cowboys, but from people he'd known since childhood who snubbed him in public. He was once asked to avoid a local Democratic Party peace rally because organizers were embarrassed by his cross-dressing.

"The physical wounds from a beating eventually heal," he says. "But the pain of being shunned by people you know lasts a lifetime. It's worse than getting kicked in the kidney."

Goodwin still fights for the right to be himself. At the state fair this year, he was kicked in the butt and turned to face five men in cowboy hats. He eyed his attacker and pointed at his blouse: "See that buddy? Don't let it fool you and don't let it happen again."

A neighbor recently mocked his feminine dress. Goodwin faced him, asking if he was a coward as well as a bigot. "I baited him — I admit it," Goodwin said. "He punched me. I might have done the same thing."

Along the way, Goodwin has learned to laugh at himself. Rummaging through dresses at a Goodwill store, he admits that his fashion sense is stuck in the 1950s. "You know you're out of date when you buy your clothes from the Halloween rack," he jokes.

Later, shopping for wrenches, he spots a large, pink industrial tool rack: "We never had those when I was an aircraft mechanic." 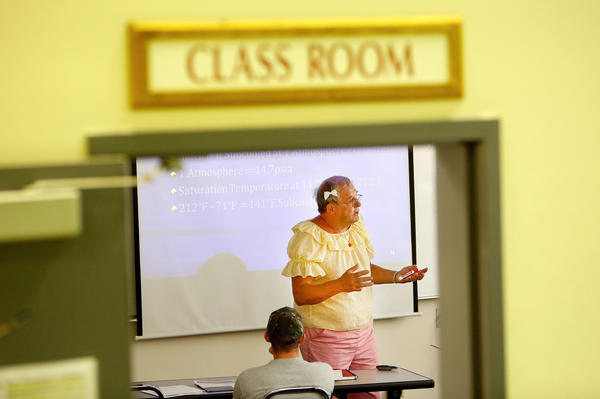 Goodwin's students at Casper College once wore pink hair ribbons and matching shirts in a show of support for him. More photos

Each morning, the instructor named Sissy arrives in the male-dominated world of Casper College's power technology lab, where he teaches young men in farm hats the science behind heavy machinery. He packs his lunch in a pink Playmate cooler and carries his coffee in a green thermos with Wyoming's logo of a bronco-riding cowboy.

He asks classes not to judge him by his dress, and they've responded. Students once arrived in hoodies, removing them to reveal pink hair ribbons and matching pink shirts. Goodwin nearly wept at the gesture.

Charles Stanford, a former student who now plays golf with Goodwin, has seen the harassment firsthand. "I respect the way he stands up for himself," Stanford says.

Bubbas in pickups still stare, but Goodwin sees progress. A stranger once saluted him in public for "having the guts not to be a cookie-cutter cowboy." Another apologized for driving by his home years ago and shouting a slur.

The comments have helped Goodwin both to accept and celebrate himself as he tries to come to terms with his guilt over the suffering his family has endured.

His boy Travis was taunted as the son of "fairy Larry." Goodwin taught him to fight back. "I blame myself now," Goodwin says. "He was defending his dad when he didn't really know what he was defending him for."

Travis, 40, says he has only twice seen his father dressed in men's clothing, once at his sister's wedding. "You could see him squirming to get out of that dress shirt," Travis says, "and get back into his dress."

He used to blame his problems on his father. Not anymore.

"He's the most brilliant man I know," Travis says. "He's not just strong physically, but mentally as well. He really is my hero."

These days, Goodwin has a favorite song, played in his honor at antiwar rallies in Wyoming by the group Annie and the Vets, whose members are friends. The refrain hits home every time, and makes him smile: "A cowboy in a party dress just ain't right." 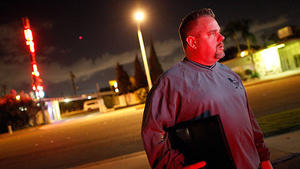 How many times did he hit you?" 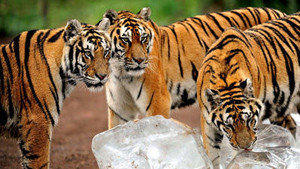 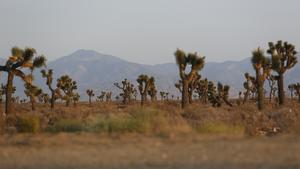