Tilda Swinton, as usual, made a strong fashion impression, with flat, feathered sandals and a tuxedo with a ruffle at the opening of the Berlin International Film Festival.

“The Grand Budapest Hotel,” in which Swinton stars along with Bill Murray, Edward Norton, Ralph Fiennes, Saoirse Ronan and others, launched the European event Thursday night. The film, by Wes Anderson, is set to open in the United States on March 7.

Swinton, whose hair color has varied, had high, platinum-blond curls and bright lipstick and toes for the event, which also featured costar Murray in a dapper hat. 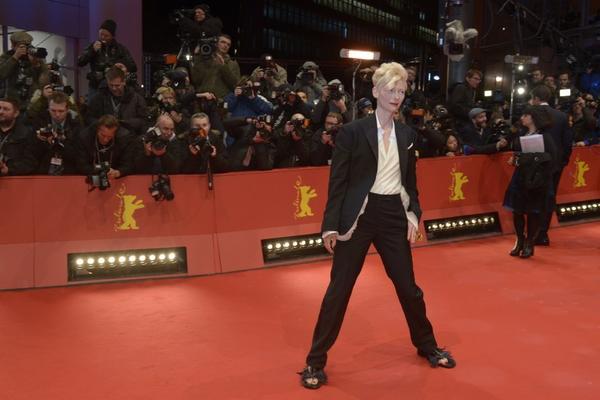 The fashion choices were in keeping with the film. Anderson’s movies tend toward the offbeat (to put it mildly). The director last year attempted to describe his latest film to the L.A. Times:

“Uuuuum ... it’s a ... as you might gather from the title, a hotel figures prominently in it,” he said. “And it’s kind of European ... a bit inspired partly by Hollywood Europe, and also by some European writers around that time. Yeah. That’s a little bit about it. Kind of vague, but ...”

“The Grand Budapest Hotel” is set in a fictional country in pre-World War II Europe and follows a concierge and his lobby boy as they try to recover a famous Renaissance painting.

Murray in a recent interview -- and wearing a tiny conical ski hat -- explained why great actors flock to Anderson’s films. With tongue in cheek:

“We are promised very long hours and low wages. And stale bread. That’s pretty much it.” But, he added, “you get to see the world, and we allow Wes to live this wonderful, magical life he has where his dreamscape comes through.” 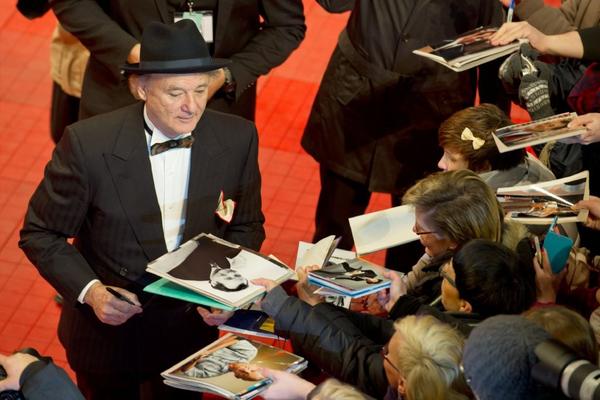 ‘The Olympics have always been a little gay’

Amy Hubbard
Follow Us
Amy Hubbard started at the Los Angeles Times in 1993 at the Valley/Ventura edition. She then turned to Features and Entertainment and served as copy chief for daily Calendar as well as Travel and Books. In 2008, she joined the AM Copy Desk as copy chief and focused on The Times’ Web product. In 2012, she joined the Web producer team as SEO chief. Hubbard is a graduate of the University of Missouri School of Journalism. She left The Times in 2015 for a stint at personal finance website NerdWallet before returning to the multiplatform editing team in 2018.
More From the Los Angeles Times
Advertisement
Latest World-Nation
Advertisement
Advertisement
Advertisement