Bao Bao, the National Zoo’s 7-month-old panda cub, would be allowed for the first time to go outside and play, the zoo announced Monday in a news release. “She may decide to stay inside the panda house,” the zoo warned. “It may take several weeks.”

Are you kidding? Bao Bao was up and out the door. On Tuesday, she spent about two hours in mom Mei Xiang’s yard.

Born Aug. 23, Bao Bao is only the second surviving cub born in the last 42 years at Washington’s National Zoo. Pandas were installed there in 1972 with a high political profile. As the Los Angeles Times wrote in 2006:

“Chinese panda diplomacy dates at least as far back as the Tang Dynasty, when Empress Wu Zetian (624-705) gave a pair to Japan’s emperor as a goodwill gift. But it reached its zenith in 1972, when President Nixon made his landmark trip to China, landing a pair of pandas that went a long way toward humanizing the isolated Communist state.”

Mei Xiang had one other surviving cub in 2005. Tai Shan, a male, went back to China in 2010 for breeding. Check out the video above and the photos below of Bao Bao’s first time outdoors, and you might be able to catch her in action via the National Zoo panda cam.

Chomping bamboo: Bao Bao and mother Mei Xiang have a snack. The cub holds the bamboo just like her mother. Giant pandas have powerful jaw muscles and large molars, handy for eating bamboo. As the World Wildlife Fund notes, giant pandas look cuddly but, when confronted, those jaws mean they can have a “very nasty” bite.

Wishful thinking: Bao Bao checked out trees in the yard but didn’t climb high, according to the zoo. Giant pandas may begin climbing trees as early as 6 months of age, according to the World Wildlife Fund. (These pandas also can swim.) The zoo performed the equivalent of baby-proofing the yard, however, trimming tree branches and “collaring” trees. Hay bales also were placed here and there to cushion falls. 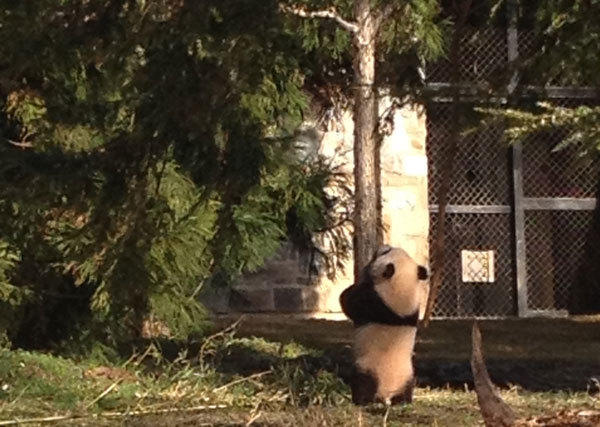 Temporary stay: The loan program with China stipulates that all panda cubs born in the U.S. belong to China, and after a few years cubs often are returned to China for that nation’s captive breeding program. The pandas are endangered, with only about 1,600 in the wild. Another 300 live in zoos and breeding centers around the globe.

A transnational Mass is said at the U.S.-Mexico border fence