Llama chase in Arizona captivates nation: How it all began, plus the 911 call

The saga of the llamas on the loose began innocently enough, or so the story goes.

On Thursday morning, a llama farmer brought three along to visit people at an assisted-living facility in a Phoenix suburb.

The llamas calmly walked up and down the halls, and residents petted the animals' woolly necks, said Stephanie Schmidt, director of community relations for the facility, GenCare Lifestyle at the Carillons.

“It went great,” she told the Los Angeles Times. “Everyone was really happy. It was wonderful.” 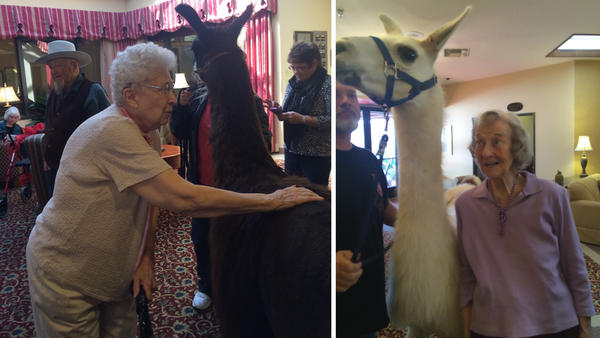 Then things became less wonderful. Or, depending on one’s perspective, a lot more wonderful.

As the llamas were being loaded into a trailer to be taken home, something spooked them. Two of them — one tall and white with a dark spot on its rump, the other smaller and dark-colored — escaped.

The third remained in the trailer as people scrambled to corral its colleagues.

“At one point the owner took that llama out to try to entice the other llamas back,” Schmidt said. “She tied it up and left it outside the trailer.”

Then the third llama broke loose too.

The sight of llamas running free through Sun City, Ariz., dodging sheriff’s deputies bent on catching them, captivated the nation.

“They’d go one direction — they’d run down the street — and we’d all run that way, and then we’d have to run back,” Schmidt said.

The third llama was easily caught, she said. The other two were more wily. So a woman from the facility made an incredibly calm 911 call to request reinforcements. The Maricopa County Sheriff’s Department was sent to help as the other two galloped across lawns, down city streets and through intersections, completely disregarding the flow and direction of traffic.

The taller llama largely took the lead, followed by its smaller companion (and a host of deputies and bystanders). At one point, the llamas paused to rest in the shade of a tree, then took off again.

Even the North American Aerospace Defense Command weighed in on the situation:

In the end, sheriff’s officials said, “citizens in the area” caught the llamas. The smaller one was nabbed first. The larger one’s wild bid for freedom lasted several more minutes, but eventually it too was rounded up.

No criminal charges will be filed, the Sheriff’s Department said, and the llamas seem to have avoided harm.

But wait — why were llamas visiting an assisted living facility in the first place? One of the residents used to raise llamas, Schmidt said, and a friend thought he would enjoy seeing some again.

RELATED: 150-pound tortoise goes on an adventure in Alhambra

5:38 p.m.: This article was updated throughout.

3:06 p.m.: This article was updated to add that the chase occurred in Sun City, Ariz., and that sheriff's officials could not be reached.

The first version of this article was published at 12:38 p.m.