Story So Far: What’s known about the suspect in the Planned Parenthood shooting

Robert Lewis Dear, the suspect in the deadly Planned Parenthood attack in Colorado Springs, Colo.,frightened neighbors, had several run-ins with police and lived in different remote cabins and trailers tucked into thick woods in North Carolina and Colorado.

Police have not disclosed a motive for the attack, but here is what we know about the 57-year-old suspect:

RELATED: Colorado Springs mayor on motive: People can 'make inferences from where it took place'

Why do police believe he opened fire?

It's still unclear, but Colorado Springs Mayor John Suthers said people can make inferences about the motive "from where it took place." Authorities have said little else about a motive. Dear's North Carolina neighbors said they never heard him talk about abortion.

Has he been in trouble with the law before?

Dear has had several run-ins with police. In 1997, his then-wife said he hit her and pushed her out a window after locking her out of their home. A neighbor accused him of peering into her home, but a Peeping Tom charge against Dear was dismissed a month after it was filed. Police were also called to his home after his neighbor's dog was shot with a pellet gun.

Where is he from?

Dear lived for years in a backwoods cabin that had no electricity or running water in the North Carolina mountains, about 15 miles west of Asheville. A cross made of twigs is nailed to the wall of the pale yellow shack. There were "no trespassing" signs at the property and at a trailer Dear used in the nearby town of Swannanoa.

What do people who know him think about him?

His North Carolina neighbors said the only companion they saw with Dear was a mangy dog that looked to be in such bad shape they called animal control because they worried he was beating it.

Dear kept mostly to himself, according to the neighbors, most of whom spoke on condition of anonymity because they feared Dear would retaliate. When he did talk, he rambled about topics that didn't make sense together and he tended to avoid eye contact, neighbor James Russell said.

Where was he living right before the attack?

Dear had an address in the town of Hartsel, about 60 miles west of Colorado Springs. Jamie Heffelman, owner of the Highline Cafe in Hartsel, said residents would occasionally see Dear at the post office to get his mail but he never said much. "Nobody really knows him, he stays to himself," she said. 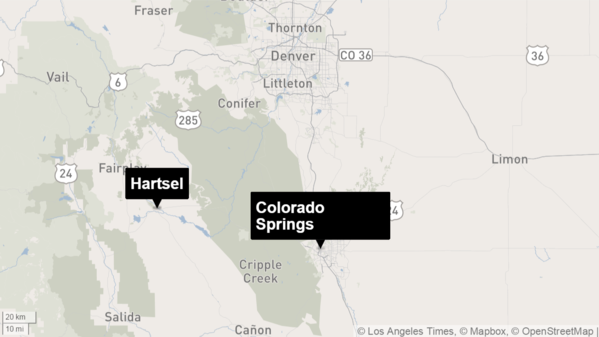 Op-Ed: Abortion and the myth of 'protecting' women

California congresswoman who had abortion to serve on Planned Parenthood committee