What may be the fiercest typhoon in recorded history smashed into the Philippines early Friday morning, carrying winds that make Superstorm Sandy look like a weak relative. Even Hurricane Katrina, the modern measure of nature’s disastrous force on the United States, pales when compared to the punch and expected devastation from Typhoon Haiyan.

According to the latest report, Haiyan, also known as Yolanda in the Philippines, was packing winds in excess of 200 mph as it homed in on the island nation in the western Pacific Ocean. The U.S. Navy’s Joint Typhoon Warning Center said maximum sustained winds in the Category 5 storm were 195 mph with gusts to 235 mph.

When Haiyan made landfall in the city of Guiuan, the winds dropped to about 165 mph, a common occurrence for such storms when traveling over land. About 12 million people were in the path of the storm that has already forced hundreds of flights to be canceled and pushed a rising storm surge that imperiled all low-lying areas.

By comparison, Superstorm Sandy, which wobbled its way across the Caribbean, carried winds of about 115 mph and around 95 mph when it hit the coast of New Jersey a year ago. Katrina, the deadliest storm of the 2005 season, was as dangerous as a Category 5 storm, the top designation, with winds of 175 mph. But by the time it hit land, its strength had decreased to a Category 3, with winds less than 129 mph.

According to Philippine emergency officials speaking to various wire services, the death toll from the typhoon was just four, but they cautioned the weather event was still in its early stages.
Already, at least 748,000 people were evacuated and many are staying in about 664 evacuation centers, officials said. Electricity was cut off, homes and commercial buildings already flattened and communication with outlying areas was strained to non-existent.

Haiyan was believed to be the most powerful typhoon to hit the Philippines, where at least 20 such storms usually land each year. Last December, Typhoon Bopha caused more than 1,000 causalities due to flash floods and storms.

And the Philippines is just the beginning. 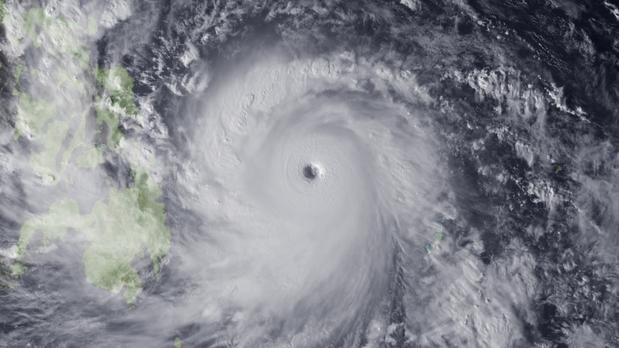 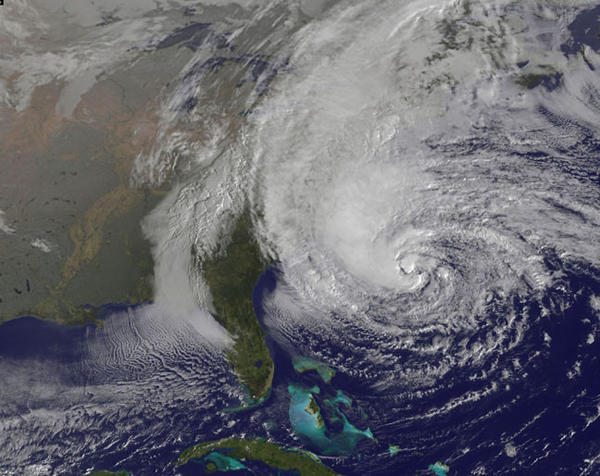 Haiyan is expected to pick up force as it crosses the waters of the South China Sea and continues to move to the west-northwest. Eventually, forecasters say, it will hit Vietnam and Laos by Sunday into Monday.

Sandy’s claim to fame was its size. The hurricane combined with two other weather fronts to create what meteorologists called a superstorm that damaged 24 states, including the eastern coast of the United States. At least 286 people died in seven countries, of whom about 160 were in the United States.

Though only slightly more than half of the deaths were in the United States, the overwhelming property destruction, $65 billion of the $68-billion total damage, was in the U.S. By definition, the value of property in a highly developed nation like the United States is always worth more than in the Third World, and Sandy tore through some of the most expensive property in the country--metropolitan New York and its suburbs.

Repair is also easier in the First World than in the Third as emergency aid can be transported along better roads and the cost of cleanup and repair is more easily borne by a wealthy society than a poor one.

PHOTOS: Sandy’s impact, then and now

Both Sandy and Katrina – and likely Haiyan as well – will prove the difference between the power of a storm and its impact. Though all carried high-velocity winds, the real damage comes later.

What made Katrina so deadly was the pressure it brought on the levee system, which failed in New Orleans. Flood waters rushed in and the scene of people trapped on rooftops and an entire city virtually underwater became the enduring images and brought comparisons with how storms affect the Third World.

More than 1,800 people were confirmed dead in Katrina. The cost of damage hit $108 billion and recovery efforts are still ongoing.

Sandy, too, carved its place into history with massive floods along low-lying areas of New York, Long Island and New Jersey. The U.S. government has already approved more than $60 billion for recovery efforts.

As an editor and reporter, Michael Muskal covered local, national, economic and foreign issues at three newspapers, including the Los Angeles Times. He left the newspaper in 2015.