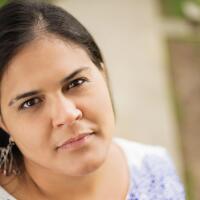 Ramírez was the recipient, in 2015, of the first PEN/Fusion Emerging Writers Prize for the manuscript of “Dead Boys,” a nonfiction work-in-progress that examines how geopolitics manifests in the lives and deaths of young men from the three countries Ramírez calls her own: Mexico, Colombia, and the United States. Once an internationally-ranked slam poet, Ramirez has an MFA in nonfiction from the University of Pittsburgh, where she now teaches in its English department.