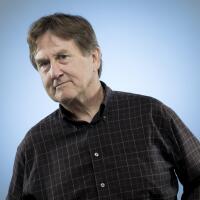 Don Kelsen joined the Los Angeles Times photography staff in 1978. But his connection with Los Angeles and the paper that serves it started much earlier. Raised in Whittier, Kelsen used to deliver the Sunday L.A. Times to his neighbors. At 16, he signed up for his first photography class. He continued to learn about the medium on his high school yearbook staff and at Rio Hondo community college, where he worked on the El Paisano newspaper. In 1968, he was called to serve in the U.S. Army and was sent to Vietnam. It was there that his photojournalism career began. He traded his rifle for a camera and hitched rides on Army helicopters to document the war. Kelsen returned after a year of service. In 1976, a Times photographer spotted his work and hired him as a freelancer. Two years later, he became full time. A lifelong film aficionado, Kelsen traded in his still camera for video in 2007. As a video journalist, he applied his keen eye, sharp wit and skilled sense of artistry to diverse projects, including motorcycle reviews, mud slides and police chases. He left The Times in 2015.