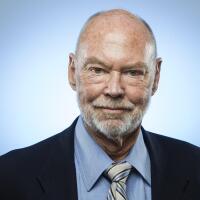 Political columnist George Skelton has covered government and politics for nearly 60 years and for The Times since 1974. He has been a Times political writer and editor in Los Angeles, Sacramento bureau chief and White House correspondent. He has written a column on California politics, “Capitol Journal,” since 1993. Skelton is a Santa Barbara native, grew up in Ojai and received a journalism degree at San Jose State.