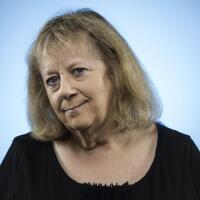 Helene Elliott joined the Los Angeles Times’ sports department in 1989. She became the first female journalist to be honored with a plaque in the Hall of Fame of a major professional sport as the 2005 winner of the Hockey Hall of Fame’s Elmer Ferguson Award, awarded to writers “who have brought honor to journalism and to hockey.” A native of Brooklyn, N.Y., and graduate of Northwestern University’s Medill School of Journalism, she has covered 16 Olympics. She recently crossed covering Wimbledon off her bucket list.