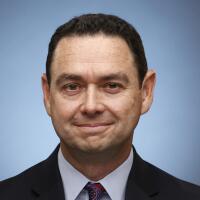 John Myers joined the Los Angeles Times as Sacramento bureau chief in 2015 after more than two decades in radio and television news, much of that as an award-winning reporter covering statehouse policy and politics. During a decade of work for San Francisco’s NPR affiliate, his unique online projects included everything from one of Sacramento’s original politics blogs to California’s first politics podcast. He served as the moderator of gubernatorial debates in 2014 and 2010 and is often cited by state and national news organizations as one of Sacramento’s top political journalists.