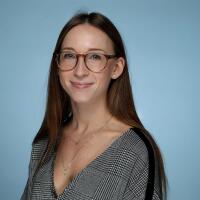 Paige Hymson is a former podcast producer for the Los Angeles Times. She previously worked at the Washington Post as a digital producer, where she produced video and live interviews with reporters and guests. She also worked at CNN in Washington, D.C., where she worked in live control rooms and produced content for many of CNN’s daily news shows. Hymson is a graduate of the University of Maryland’s Philip Merrill College of Journalism and is originally from Cherry Hill, N.J.