Nearly a mile underground in South Dakota, the ultra-sensitive Large Underground Xenon experiment, or LUX, is searching for evidence of one of physics’ ultimate mysteries: dark matter.

Searching for one of of physics' ultimate mysteries: dark matter. 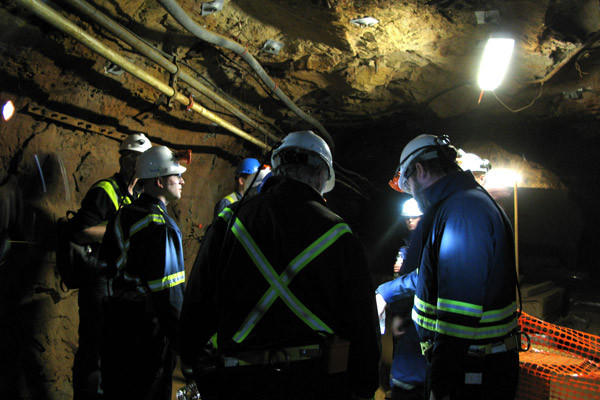 Nearly a mile underground in South Dakota, the ultra-sensitive Large Underground Xenon experiment, or LUX, is searching for evidence of one of physics' ultimate mysteries: dark matter.

he scientists don hard hats, jumpsuits and steel-toed boots to pile into a metal cage for a rumbling 11-minute descent into an abandoned South Dakota gold mine. They step over old mine-cart rails, through rough-walled tunnels and into a bright white room. There, they cast off their dusty garb and enter a lab hidden nearly a mile beneath the Earth.

Inside, Patrick Phelps peers at valves connected to half a million dollars' worth of some of the purest xenon in the world.

"Is everyone ready?" the Case Western Reserve graduate student calls out over growling machinery filling the cavernous space. Ice piles on a nearby tank, digital displays glow green, and bundles of wires curl in every direction.

"Let's do it," says Attila Dobi, a University of Maryland graduate student.

Here, with a two-story state-of-the-art detector sheltered in what was once North America's deepest gold mine, the scientists are panning the cosmos for a flash of something far more elusive than gold: dark matter.

Dark matter outnumbers normal matter in the universe 5 to 1, yet remains one of physics' ultimate mysteries. It can't be seen or felt, and passes through Earth like a phantom. Scientists think it might be made of hypothetical "weakly interacting massive particles" — WIMPs — though they have yet to find one.

But astronomers know dark matter exists: Without its gravity, spiral galaxies' pinwheel arms would be ripped from their bodies and flung into space.

On the rarest of occasions, a dark matter particle might just bump into a normal-matter atom. The trick is to catch that signal amid the hail of cosmic particles bombarding Earth so thickly that hundreds pass through your body each second.

Scientists strain their ears for that dark matter whisper against the background roar. They dig deeper and deeper into the Earth, to mute the cosmic noise. They fill tanks with liquid xenon that's dense as rock, armor it with a 70,000-gallon shield of water and wait for particles to hit it. 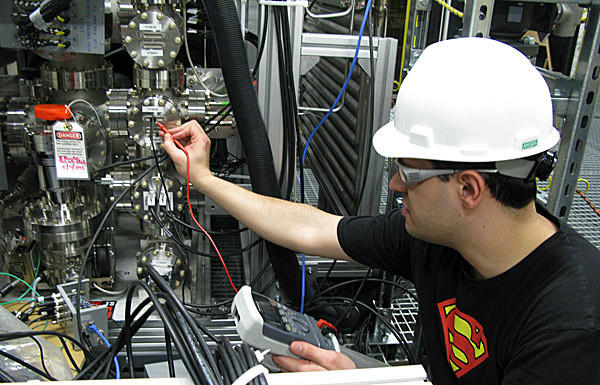 When a particle strikes the xenon, they listen for the right rhythm. A normal particle can tap out a staccato beat. Dark matter will strike just once.

And they listen for the faintest notes.

"The dark matter will sound different from the background, so you can actually tell the difference," Yale University physicist Dan McKinsey says, raising his voice over the cavern's buzz of machinery.

The Large Underground Xenon experiment, or LUX, is estimated to be 10 times more sensitive than all other such detectors put together.

Now, for the dark-matter hunters deep in the Homestake gold mine, half a decade of preparation may finally be over.

Before "turning on" the detector for the first time this day in early February, several researchers spend hours going through their checklist, closing dozens of valves to control the flow of xenon. It's a painstaking process, and they toil in pairs to check each other's work. Phelps calls out the valve numbers: 15, 16, 30, 31.

"Long list," Dobi says finally, as they close another.

"It is," Phelps replies evenly, moving on to the next valve. "Seven?"

At nights, in our dark moments, we just color and drink beer"

Xenon is costly, but the scientists say it's worth the roughly $1,000-per-kilogram price tag. Like a field full of brawny defensive linemen standing shoulder to shoulder, the massive atoms in the dense liquid block out unwanted particles — and raise the odds of trapping a slippery dark matter particle trying to squeeze by.

These players are also self-disciplined. Xenon is so chemically inert that electron signals from any collisions can pass freely through the liquid. These crucial signals let scientists eliminate phony dark matter candidates.

Once the researchers release the xenon to fill the detector, they'll have to carefully control the flow. If it gets too warm, the pressure will surge as the liquid evaporates. If it gets too cold, ice can form and wreck sensors inside.

"We're just going to have to really fine-tune it," Dobi says. "There's going to be a lot of panicking in the beginning."

If the pressure does spiral out of control, burst discs will explode and allow precious xenon gas to pour into a giant black balloon. The deflated bag stretches across the cavern, a worst-case scenario hanging over their heads.

"I'll feel a lot better once we've actually started. Because until we've started, I'm not 100% sure it's going to work," says Simon Fiorucci, the Brown University physicist who's been wrangling the detector's operations on-site. He's 98% certain, he adds. "But we've been burned by 98 before."

The lead scientists may rule the project, but the grad students own it. They've spent long, intimate stretches with the detector, and it shows. When a device needs ventilation, they drill a lopsided smiley face into it. When they need to cool down some xenon, they pour liquid nitrogen into a blue Igloo picnic cooler. 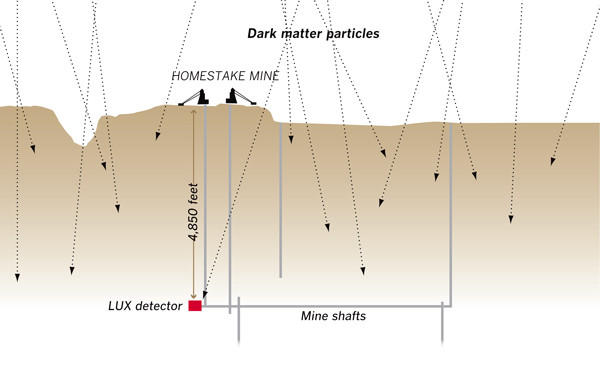 "It's efficient for holding," Dobi explains. Then he pauses. "If you want to play with liquid nitrogen, we could get some for you. Feel free to freeze your lunch and then shatter it into little pieces."

This offer alarms McKinsey. "That would probably freak out the lab," the Yale professor says.

Dobi shrugs. "Not in this lab."

A rainbow-maned unicorn-on-a-stick stands sentinel on a worktable. Dobi rides it around the lab on particularly stressful nights.

The machine they have built is rather like a bigger, better version of the dark matter detector at the Gran Sasso particle physics laboratory in Italy.

The resemblance is no accident. Many of LUX's lead scientists have seceded from the European collaboration, whose future experiments would be cramped for space. The physicists faced a choice: help build the next experiment in Italy, or try for a larger detector that would take longer to build but whose greater volume would offer far more sensitive results.

It was a gamble, LUX scientist Richard Gaitskell says — one that depended on whether scientists thought a discovery was just around the corner or farther out on the horizon.

The scientists had a spot in mind, too: the Homestake mine, a hallowed place in astrophysics.

In the 1960s, in the same cavern where LUX now sits, physicist Ray Davis persuaded the mine's operators to let him immerse a tank of dry-cleaning fluid in water to capture neutrinos from the sun. His experiment helped show that neutrinos had mass, contradicting the standard model of particle physics, and earned Davis part of the 2002 Nobel Prize in Physics.

When Homestake officials told physicists in 2000 that they would be shuttering the mine, scientists saw a golden opportunity to turn it into an underground lab. It would make the U.S. a major player in the deep science game. 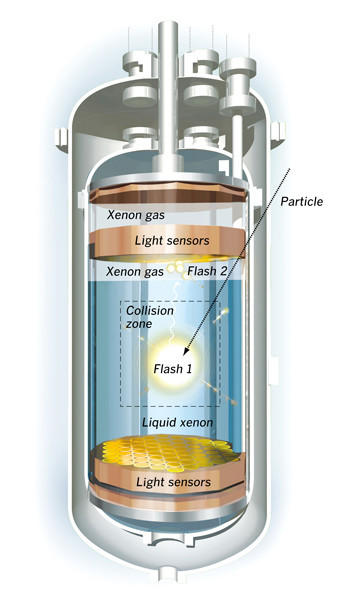 Scientists will watch for a two-flash combination to occur when a dark matter particle collides with highly purified xenon inside the detector. (Graphic by Lorena Iniguez Elebee; Graphic reporting by Brady MacDonald) Interactive graphic

The National Science Foundation spearheaded the operation. The Department of Energy joined the effort. The state of South Dakota — population 833,000 — poured more than $40 million into the project. Local businessman and philanthropist T. Denny Sanford tossed $70 million into the pot. His namesake Sanford Lab would inhabit the mine. LUX would be the first major science experiment completed at the facility.

Then in 2010, the National Science Foundation abruptly pulled back, balking at the idea of running such a lab. Caught off-guard, the Department of Energy weighed whether to take over. Even as the lab's fate hung in the balance, the LUX scientists kept working.

Their faith paid off. Swayed in part by LUX's promise, the Energy Department stepped in.

Now, ready to finally fill the detector with super-purified xenon and bring the experiment to life, the graduate students are ecstatic. They open the bottles with ceremony, smiling at the valve's first hissing pop of air as if it's from a bottle of champagne.

Then an alarm goes off. A sensor isn't working, and they can't see whether the xenon level is rising as it should.

Fiorucci, sitting cross-legged among the detector's machinery as he diagnoses the problem, isn't too concerned. The detector is working — the team just don't know what exactly is happening in it right now. And he can wait. He's not even expecting to find dark matter.

"That's not around the corner, I don't think," he says. But, he adds, even if they find nothing, "we will have not found dark matter better than everyone else."

Within three days, the detector will fill up with more than 800 pounds of xenon cooled to minus 148 degrees Fahrenheit. In the weeks ahead, they'll start circulating the xenon and pulling out impurities, preparing LUX to start taking dark matter measurements.

For now, many of the grad students are ready for a well-earned break. Paper unicorns pop up in surprising nooks around the lab, bearing Technicolor testament to the demanding hours the scientists have spent underground.

"At nights, in our dark moments, we just color and drink beer," Dobi says. Asked to explain the logic, he jokes, "It's magical. It just kind of happened."

Then he shrugs. "Well, we're looking for magical particles, anyway."

Trying to prove their love