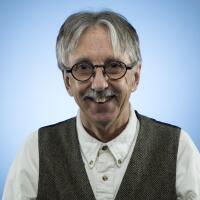 Bob Chamberlin, who started at the Los Angeles Times in 1979, was the first Times photographer to go into a war zone, traveling to El Salvador in 1981. He went to Haiti in 1985, where he photographed Jean-Claude “Baby Doc” Duvalier two months before the dictator fled the country. In 1986, he became a senior photo editor and helped shape coverage on events including presidential election conventions, the First Gulf War in Iraq and the 1992 riots in Los Angeles. After the riots, he volunteered to return to the field as a photographer working for City Times in hopes of photographing healing in the city. On the Metro photo staff, he covered a variety of assignments in Los Angeles and he also worked as a weekend photo editor for the Sunday edition. He left The Times in 2015.