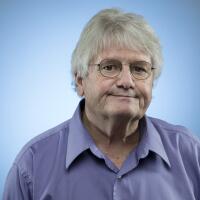 Bob Pool retired in 2014 from the Los Angeles Times, where he had been a general assignment reporter on the Metro staff since 1983. While newsgathering, he’s been shot at (the gunman told sheriff’s deputies it was “a warning shot”), sued (the case was thrown out) and assaulted (a firefighter pulled the attacker off). He also spent one month of December as a mall Santa for a holiday series. A Los Angeles-area resident since 1958, he has a journalism degree from San Fernando Valley State College (now CSUN).