Story So Far: MH370: Here’s what you should know about the plane’s mysterious disappearance

Australia, China and Malaysia on Tuesday called off the underwater search for Malaysia Airlines Flight 370, saying “no new information has been discovered.”

The plane vanished in March 2014. For 17 months, no trace of it was found. The location of the missing passenger jet officially remains a mystery. The Boeing 777 carried 239 passengers and crew members. All are presumed dead.

Here's a synopsis of one of the most mysterious disappearances in aviation history:

Where the plane was headed

On the morning of March 8, 2014, the Beijing-bound plane departed Kuala Lumpur around 12:20 a.m. with 227 passengers and 12 crew members on board. The plane's planned route would have taken it north over the Gulf of Thailand and Vietnam, with an arrival in Beijing around 6:30 a.m. Read more

Who was on board

More than 150 passengers were from China, 38 from Malaysia and three from the United States. Other passengers were from Indonesia, Australia, France, New Zealand, Ukraine, Canada, Russia, Taiwan, Italy, the Netherlands and Austria, officials said. The pilot, Capt. Zaharie Ahmad Shah, 53, and copilot Fariq Abdul Hamid, 27, were both Malaysian. Shah had 18,000 hours of flying time, and Hamid had 2,700.

One of the Americans on board was Philip Wood, a 50-year-old IBM executive. Another passenger was martial arts expert Ju Kun, who recently had joined the production of the Netflix series "Marco Polo," which was filming in Malaysia. Read more

Around 1 a.m., the plane transmitted its final Aircraft Communications Addressing and Reporting System signal, which allows computers aboard the plane to communicate with control towers on the ground. According to officials, the last communication MH370 had with air traffic control came around 1:20 a.m., when one of the pilots said, "Good night Malaysia three seven zero."

Shortly after that, officials with the Civil Aviation Administration of Vietnam said, the plane failed to check in as scheduled with air traffic controllers in Ho Chi Minh City, and all computers aboard the plane that could track its location had been deactivated.

How the flight path changed

Based on military radar, it is believed the plane changed course immediately after the communications systems were deactivated. It banked west from its northern path and headed back toward Malaysia and out over the Indian Ocean. U.S. investigators suspect MH370 remained in the air for up to four hours before crashing into the Indian Ocean.

Theories included a possible electrical failure or a fire in the cockpit. Terrorism was also considered, especially because two Iranian men had used stolen passports to board the plane, but it was later ruled out.

Was it pilot error? That remains a mystery. Investigators looked into Shah and Hamid, but because the black boxes that hold flight data recordings have not been discovered, investigators don't have a definitive answer.

A report conducted by Malaysia's Ministry of Transport found that a battery on one of two underwater beacons attached to the plane's black box had expired more than a year before the aircraft vanished. That finding suggests that searchers listening for "pings" from the beacons on the flight data recorder and the cockpit voice recorder never even had a chance of detecting a signal from one of the devices. Read more

Search teams began by looking for the plane in the Indian Ocean about 1,600 miles off the coast of Perth, Australia. Pings thought to be from the plane's black box recorders were being picked up in the area, and a fleet of ships and aircraft were dispatched. Satellites located debris, and some oil slicks were seen in the water, though nothing was recovered. After about 10 days searching the area, radar estimates were recalibrated and the search was moved about 700 miles northeast, where it remains.

In January 2015, the plane's disappearance was ruled an accident. "At this juncture, there is no evidence to substantiate any speculations as to the cause," Azharuddin Abdul Rahman, director general of the civil aviation department, said at the time. Read more

Status of the search

Australia, China and Malaysia called off the underwater search on Jan. 17, 2017, saying “no new information has been discovered” to solve what has become one of aviation’s greatest mysteries.

A statement by the Joint Agency Coordination Center in Australia, which has helped lead the $160-million effort, said the deep-sea search was suspended after failing to find a trace of the Boeing 777 in a 46,000-mile zone in remote waters west of Australia.

“Despite every effort using the best science available, cutting-edge technology, as well as modeling and advice from highly skilled professionals who are the best in their field, unfortunately, the search has not been able to locate the aircraft,” the statement said. Read more 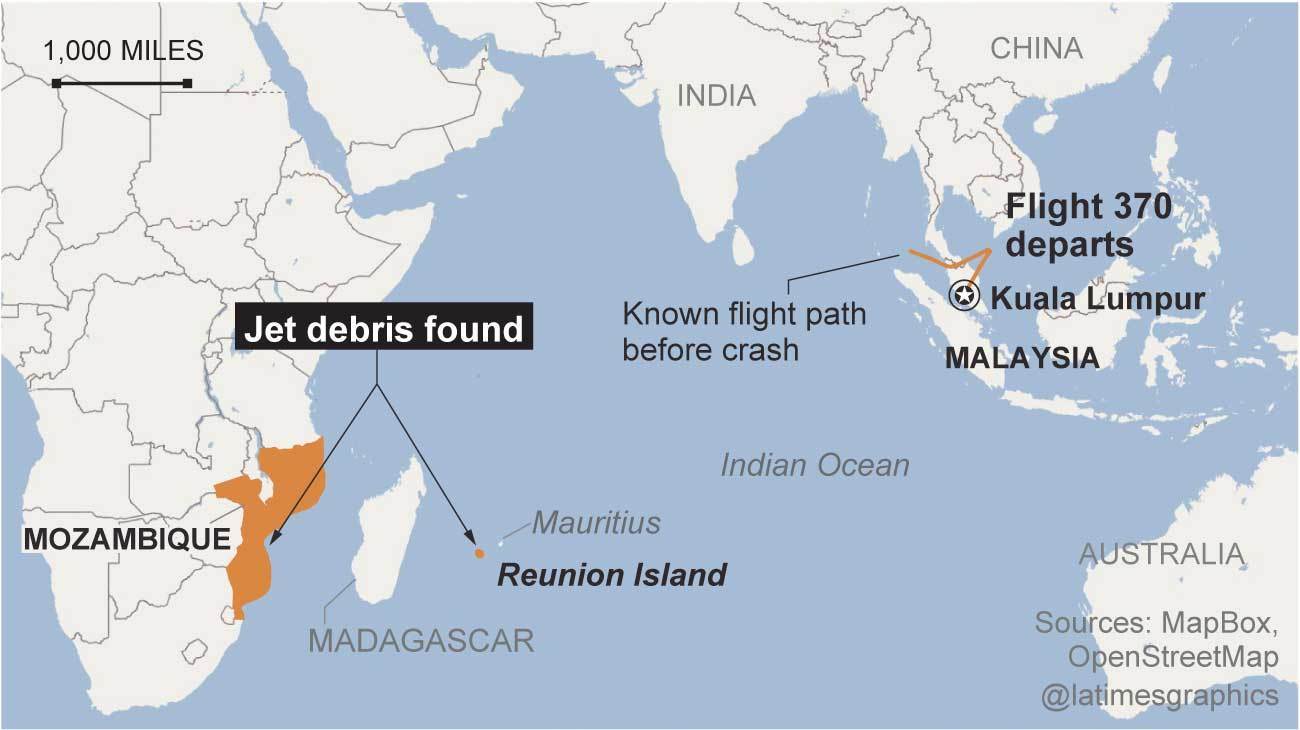 One of the parts in Mozambique was discovered in February 2016 by American lawyer and part-time adventurer Blaine Gibson of Seattle. Gibson, who said he's been searching for Flight 370 over the last year, found the piece on a sandbank.

Soon after Gibson's find was publicized, a South African teenager realized a piece of debris he'd found on a beach during a family vacation in Mozambique might also be from the plane. Liam Lotter came upon the gray piece of debris while strolling on a beach in southern Mozambique in December and thought it might be from an aircraft.

His parents dismissed it as trash that may have come from a boat, but the teen insisted on bringing it back to South Africa to research the fragment. Once back at home, the piece ended up in storage alongside the family's fishing gear and was nearly forgotten. It was only when Lotter read about Gibson's find about 186 miles from where he had made his discovery that the family alerted authorities.

Given the vast distances involved, the variability of winds and the time that has elapsed, it is impossible for experts to retrace the parts' path back to where they entered the water. So experts will examine the debris to see whether it can offer any other clues, such as structural deformities that could show the angle at which the plane entered the ocean or markings that could indicate a midair explosion.

On July 29, 2016, a piece of an airplane wing was discovered on Reunion Island, which belongs to France and sits off the coast of Madagascar in the Indian Ocean.

Days later, a Malaysian transport official said the piece — called a flaperon — was from a Boeing 777.

Abdul Aziz Kaprawi, the country's deputy transport minister, told reporters he believed the item could provide "conclusive proof that Flight MH370 crashed into the Indian Ocean," and said he believed officials were "close" to solving the mystery of the jetliner's disappearance.

The item was discovered within the 1,100-mile search area investigators have been operating in since 2014, but experts believe the plane probably went down far from Reunion Island. The length of time since the plane disappeared and the onset of winter in the search area will keep search efforts at a crawling pace, they say.

On Aug. 5, French and Malaysian officials confirmed that the item belonged to Flight 370, only hours after experts began examining it at a defense laboratory near Toulouse.

As of late March 2016, the wing part found on Reunion had not yet yielded any significant clues into the plane's fate.

What else the wing piece could show

Close-up pictures of the flaperon show damage that suggest it broke off the aircraft during a high-speed dive, a prominent aviation accident analyst said.

That would validate one of the main theories about what happened to the plane: "that when the aircraft ran out of fuel it made an almost straight spiral down," said David Soucie, a former accident investigator for the Federal Aviation Administration. Read more

What has happened to the passengers' families?

Malaysia's official declaration that the plane's disappearance was an accident should clear the way for the compensation process to proceed for families of the 239 people who were on board.

"Without in any way intending to diminish the feelings of the families, it is hoped that this declaration will enable the families to obtain the assistance they need, in particular through the compensation process," Rahman of the civil aviation department said at the time.

Sarah Bajc, the partner of passenger Wood, has joined with others in hiring a private investigation firm with about $100,000 they have raised. Bajc, 48, was in Beijing waiting for Wood when the plane disappeared.

A statement by Voice370, a group made up of family members of the missing, pleaded with the governments to continue the search, saying that “commercial planes cannot be just allowed disappear without trace.” Read more

Aug. 5, 11:42 a.m.: This article was updated after officials confirmed the wing debris found on Reunion Island did belong to Flight 370.

Aug. 2, 7:56 p.m.: This article was updated with comments from aviation analyst David Soucie.

July 31, 9:08 a.m.: This article was updated with comments from a Malaysian transport official about the recovery of a possible piece of the plane.

July 30, 10:52 a.m.: This article was updated with additional information about the shipwreck discovered in May and reaction to the discovery of a possible piece of the plane off the coast of Madagascar.

July 30, 7:59 a.m. This article was updated with information about the possible recovery of a piece of the plane near Madagascar.

May 5, 1:22 p.m.: This article was updated with information on a shipwreck that was discovered.